Evidently highlighting Hillary Clinton’s strange behaviors, her inability to climb stairs without the help of two secret services agents, her habit of falling down,  her passing out on 9/11, her criminal activities, and the fact that Democratic operatives paid protesters to interrupt Donald Trump events, is all “fake news” and Russia propaganda according to the MSM, despite visual evidence, leaked emails and the Project Veritas hidden camera footage.

Via Gateway Pundit who quotes the Washington Post article, because I certainly won’t link to WAPO.

Russia’s increasingly sophisticated propaganda machinery — including thousands of botnets, teams of paid human “trolls,” and networks of Web sites and social-media accounts — echoed and amplified right-wing sites across the Internet as they portrayed Clinton as a criminal hiding potentially fatal health problems and preparing to hand control of the nation to a shadowy cabal of global financiers. The effort also sought to heighten the appearance of international tensions and promote fear of looming hostilities with nuclear-armed Russia.

Here is how The Hill describes the “news” from the Wapo article:

The coverage was overwhelmingly favorable to Donald Trump, and some of the most notable examples of fake news garnering major traffic online centered on Hillary Clinton’s health, protesters that were allegedly paid to interrupt Trump events, and fears about vote tampering.

“The way that this propaganda apparatus supported Trump was equivalent to some massive amount of a media buy,” said the executive director of PropOrNot, who spoke on the condition of anonymity with the Post. “It was like Russia was running a super PAC for Trump’s campaign.”

A look at the website Wapo cited, called Propaganda or Not, or PropOrNot, lists hundreds of websites they consider in their “expert” opinion to have spread Russian propaganda against Hillary Clinton, naturally targeting conservative Alternative News websites, including the Drudge Report.

Other websites named include some of the following which many alternative news readers should be familiar with such as Activist Post, America’s Freedom Fighters, All News PipeLine, Freedom Outpost, Healthnut News, Zero Hedge, Natural News, Infowars, Prison Planet, We Are Change, SHTF Plan, and many, many more.

Much like the list of supposed “fake news” sites that the LA Times recently linked to, but has since been taken offline, PropOrNot attempts to conflate fakes news with Alternative News, in a concentrated effort to help the mainstream media regain control of the “message.”

These coordinated attacks by the MSM against Alternative News websites are nothing more than the MSM’s little temper tantrum that they can no longer control the narrative and lead the sheep in the direction the MSM wants them to go and influence their every decision.

BITING THE HAND THAT FEEDS YOU

At some point or another almost all Independent news sites, such as ANP, have linked to MSM, for quotes or other bits of information, meaning revenue for the MSM from their online advertising by traffic Alternative News sites have sent them, but no one sends more traffic to the MSM than Matt Drudge, who has been listed as the most influential person in the American media.

By citing a site and a supposed “expert” from PropOrNot, which is attempting to claim that the Drudge Report is pushing Russian propaganda, the Washington post is biting the very hand that feeds them millions upon millions of hits in traffic each and every month, as seen in the chart below, showing how much traffic Drudge has sent to different sites from January to July 2015. 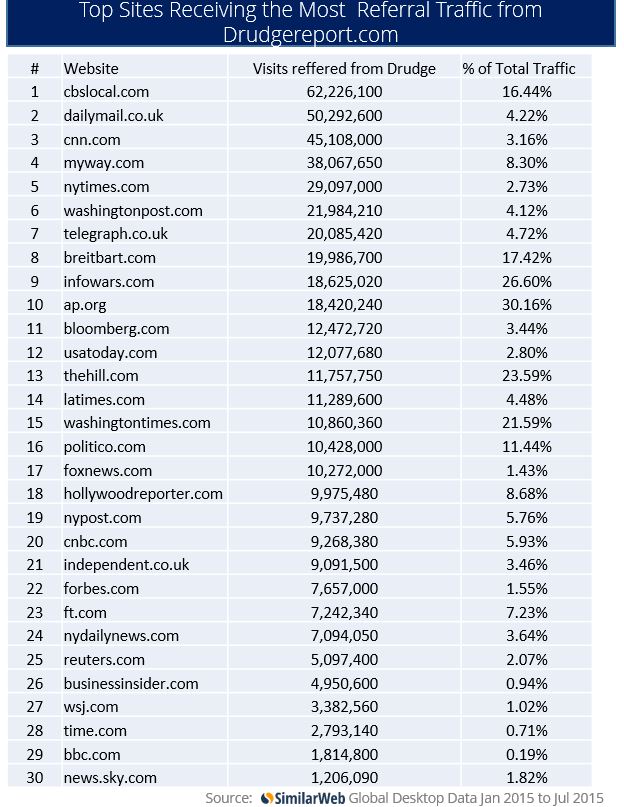 The Washington Post, much like many other MSM outlets, have become dependent on digital revenue versus revenue from their printed publication which has seen a massive decline across the board, so citing a source that claims Drudge is pushing Russian propaganda is nothing short of a declaration of war against Drudge and any website listed that reported on Clinton health issues and criminal activities.

The Drudge Report has moved into second place in the top publishers and publications in the US as of July 2016, according to SimilarWeb,  with 1.472 billion page-views, showing his influence is increasing and any site linked to by Drudge is generating an astounding amount of revenue just from being linked to by Matt Drudge.