Donald Trump: The Media Executioner, Punks The Mainstream Then Cuts Out The Middlemen To Speak Directly To The People

Donald Trump: The Media Executioner, Punks The Mainstream Then Cuts Out The Middlemen To Speak Directly To The People

Once again President-Elect Donald Trump managed to punk the media, inviting some of the most well-known media names to Trump Tower for a meeting, and then according to multiple reports, ripping into them for their constant negative coverage and outright lies, with one report claiming that a source said the little summit was a “f***ing firing squad.”

“Trump kept saying, ‘We’re in a room of liars, the deceitful dishonest media who got it all wrong,'” the person said. “He addressed everyone in the room calling the media dishonest, deceitful liars. He called out Jeff Zucker by name and said everyone at CNN was a liar, and CNN was network of liars … It was a horrible meeting.”

The mainstream media that has been whining non-stop about how Trump has not provided them with “access” that other president-elects have traditionally given them, the same media that has given Trump wall-to-wall negative coverage since the day he announced his candidacy, the same press that labeled him and his supporters as sexist, racist, xenophobic “deplorables,” were so arrogant going into the so-called summit thinking Trump was going to discuss giving them more access to create more lies, misrepresentations and liberal spin.

Really? Are they so wrapped up in their own bubble that they couldn’t see that while Trump may have let bygones be bygones had these media organizations from a variety of outlets started reporting fairly after the election, their reporting since the election has been continuously critical, negative, described by a tabloid journalists that did not support Trump as “berserk,” and “revolting to watch” and saying they were “barfing all over yourselves.”

They have learned nothing at all in the last year and a half. Nada. Zilch, Zip!

Needless to say, Internet and radio pundits got a kick out of Trump calling the media hotshots together just to blast them as liars as a few reactions from Twitter show: 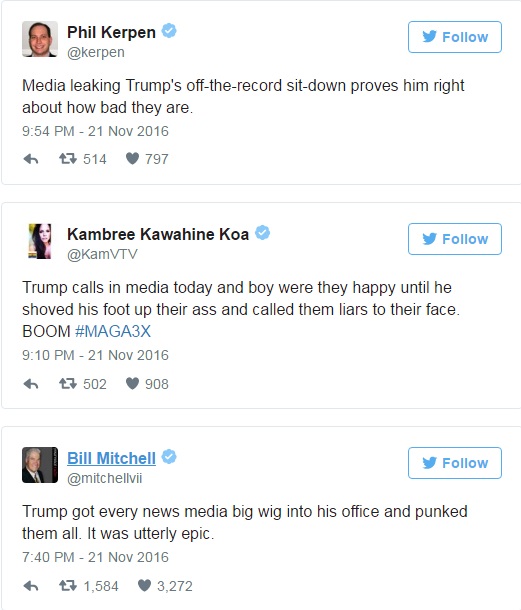 What many outlets haven’t reported about the Trump meeting with the media, is addressed by Politico, who reports that when a media executive asked Trump how he defines “fair,” his response was simple… “The Truth.”

Note – This isn’t the first time Trump has punk’d the media either, as many might remember before the election he invited them to a pre-debate presser, to which they all rushed right over to cover, then he walked in with a number of women that have accused Bill Clinton of rape.

New York Times, which was not represented at the meeting, they meet with Trump today, has even been taken to task by their own public editor for their bias against Trump during the election cycle, discussing the massive amount of complaints the paper has been receiving from their own readers, saying those complaints were five times higher than the normal level of complaints, many of which coming from liberals.

To add insult to injury, Trump then showed his contempt for the press by not only blasting them rather than addressing the “access” issue, he then proceeded to bypass them totally on his first Transition Update, taking it directly to the people, via a 2 1/2 minute video clip, shown at his transition website greatagain.gov, published to YouTube, shown to his 15 million followers on Twitter, and seen by over 7.5 million Facebook users.

As many can well imagine liberal pundits are not happy at how Trump has decided to talk directly to the people, rather than allowing his words to be twisted, taken out of context, lied about via the liberal, anti-Trump prism the mainstream media pushes relentlessly at the public.

Here are a few examples of the headlines that are already being generated, with each article highly snarky about how Trump bypassed the MSM to speak directly to Americans.

“Trump subs in a YouTube address for a press conference.”

Alternative Media outlets such as The Last Refuge, are applauding the fact that Trump is informing Americans directly, basically cutting out the middlemen aka the mainstream media, stating “If there was any doubt that Donald Trump was going to usher in a new American era of communication where the main stream corporate media were made irrelevant, well, this should answer the question.”

One of the most telling indicators that the mainstream media is losing the information war, comes from a recent CNN poll (I am linking to a Washington Times article about that poll rather than CNN itself) where we note that a majority of Americans feel Donald Trump will do a “very” or “fairly” good job as president, and that is despite the overwhelming amount of critical and negative coverage constantly seen in the MSM headlines since he was elected to be the 45th President of the United States of America. 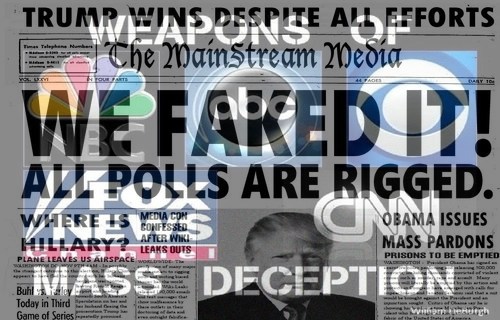 The biggest losers of the 2016 presidential election was not Hillary Clinton, nor her supporters, it was the mainstream media. Not only are they distrusted more than at any time in history, they are also watching their ship sink, seeing themselves become irrelevant as Trump proves yet again that he is quite capable of completely bypassing them in talking to “we the people.”

Related: The Mainstream Media Are Dead

For now, since it is doubtful the mainstream media is capable of reporting the “truth,” given their obvious and blatant anti-Trump bias, it seems that if the America wants to know what is happening during the transition period, his appointments, his plans, his agenda, without the MSM “interpreting” it and telling their sheep what to think about it, they will have to keep an eye on the Transition website, Trump’s social media, and to hear his unfiltered statements to the public, his Transition 2017 YouTube channel.