We are seeing encouraging economic news reported, all citing Donald Trump’s election win as the cause, while at the same time we are noting that the problem of social justice warrior snowflakes is far more dangerous than they originally appeared to be throughout the last few years.

Two months before President-Elect Donald Trump is sworn in as President we are already seeing reports of his economic plans bearing fruit as Ford Motors has now confirmed that its Lincoln SUV made at the Louisville assembly plant will stay in Kentucky, and they specifically cite Trump in their statement to Bloomberg News.

We are encouraged that President-elect Trump and the new Congress will pursue policies that will improve U.S. competitiveness and make it possible to keep production of this vehicle here in the U.S.,” the automaker said in an e-mailed statement.

Another encouraging sign is reports that Apple is studying the possibility of moving iPhone production to the U.S., once again citing Trump policies.

The person added that one view among the Apple supply chain in Taiwan is that U.S. President-elect Donald Trump may push the Cupertino, California-based tech titan to make a certain number of iPhone components at home. 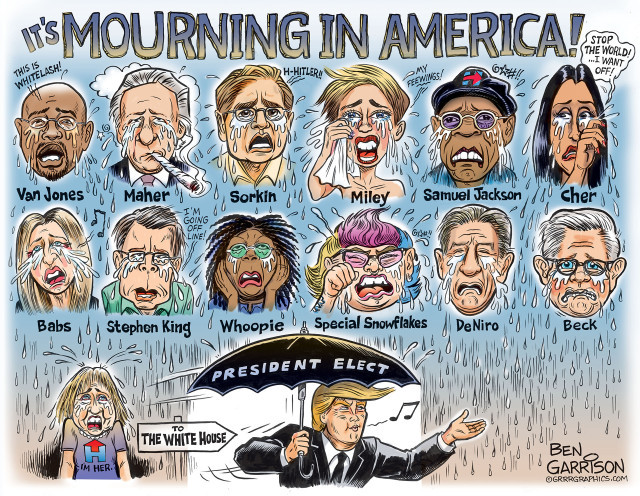 When speaking of the little college snowflakes, the ones that need teddy bear hugging classes, play-doh and coloring books, cry-ins and safe spaces because of their inability to handle the fact that the candidate of their choice didn’t win the presidential election, one might think the only “danger” from them is getting hit when they throw their binkies or they may nail  you with a rattler….. but we are noting now that “snowflakism” (Yes, I made that word up) is even more prevalent throughout society than we originally gave them credit for and it is dangerous indeed.

For example, these dangerous little snowflakes are now threatening death to members of the Electoral college as reported by WND:

One of Michigan’s 16 electors who will be called upon to cast a vote validating the election of Donald Trump in the Electoral Collegehas testified on video that he and others in the state are receiving “dozens and dozens of death threats” from Hillary Clinton supporters urging them to switch their votes to Clinton. ….[More]

BuzzFeed reported Thursday that the #NotMyPresident Alliance, a national anti-Donald Trump protest group, has released the personal information of dozens of Electoral College members in states that voted Republican.

The group hopes its members and citizens around the country will contact electors and pressure them to change their vote from Trump to another candidate before Dec. 19.

Put the shoe on the other foot for a minute. Had Clinton won the election and it was Trump supporters publishing personal information about the Electoral College members and supporters were threatening to kill them, would there not be outrage from the left? Wouldn’t there be calls going out to Trump to denounce and condemn this type of criminal activity?

For that matter if Trump supporters started rioting, wouldn’t more level-headed supporters and Trump himself not speak out against it?
Children are being beaten, attacked, for no other reason that they support Trump as shown in the video below.

Where the heck is Hillary Clinton and Barack Obama? Oh yeah, Obama is actually encouraging snowflake rioters that cannot accept election results, telling them to continue!

This is not just college-age children we are talking about, but the systematic seeding of these little snowflakes throughout society, taught by liberal snowflake college professors, joining organizations that are inciting violence, and encouraged by the MSM, who continue to promote this behavior because of the outcome of a presidential election.

We are seeing reports of professors at colleges, leading anti-Trump walk-outs, with both the students and professors “denouncing white people, Trump supporters, and Republicans.” Another report shows a different professor calling the Founding Fathers “terrorists.” Another one calling the Trump presidency the “definition of rape.” Another has been “forced to undergo psychological evaluation after he threatened to murder white Americans as a way of testing their affinity for the Second Amendment.” According to a Campus Reform report, “High-ranking college administrators nationwide are horrified by the results of the 2016 election, sending mass emails to their students to express their personal fear and outrage with Trump’s election.”

Is this really what parents spend tens of thousands of dollars to colleges across America for? So their children can learn political ideology from liberal, bigoted, spoiled college professors that are teaching their students not to accept reality, rather than being prepared to cope with the world outside of college?

These snowflake college students did not create themselves, the problem is systematic. All one has to do is check the College Fixand Campus Reform headlines each week to see exactly how dangerous this issue has become and it is getting worse.

We have seen the CEO of PacketSled, Matt Harrigan, who was forced to resign after publicly threatening to assassinate Donald Trump in a series of Facebook posts, stating he was “going to get a sniper rifle,” and kill the President-Elect.

When I said these little snowflakes are seeded throughout society, I wasn’t kidding as we see another example which occurred before the election but is just going viral, from a Starbucks employee, after a customer tells him he called the home office and was told he was allowed to choose any name, even Trump, to be put on his cup, the little snowflakes not only refused but called the police on him.

MESSAGE TO TRUMP PROTESTERS FROM A ‘NEVER TRUMP MILLENNIAL’ – GROW UP

And now Trump has won. But you don’t see me, or my Never Trump peers, losing our collective minds because we don’t support the president-elect.

On college campuses across our nation, rioters have burned the American flag, staged mass walk-outs from class to protest “white America,” and even have spray painted “AmeriKKKa” on the American flag. College administrators and professors have cancelled classes and midterms so students can cope with the “trauma” of a Trump election.

University groups are also holding group “cry ins” (you read that right), as well as organizing group hugs for students to deal with their post-electoral trauma. One Ivy League University even held a post-election safe space with puppy cuddling and coloring books. Another offered students building blocks and Play-Doh.

Yet by refusing to accept the results of the election, you student protesters just show that if you don’t get your way, you will riot, protest, and complain — like a toddler throwing a tantrum.

Piers Morgan over at Daily Mail Online has a must-read message to the snowflake Millennials, telling them “that awful feeling you’ve got is called losing. It happens.”

STOP crying. STOP taking personal days off work to ‘process’ what happened. STOP huddling with your equally distraught buddies in Starbucks over your Venti Iced White Chocolate Mocha. STOP howling away on social media about how unfair life is and how it’s the end of the planet as we know it. STOP updating the exact number Hillary won the popular vote by, because it doesn’t bloody matter. STOP marching around screaming your fury at the result when many of you couldn’t even bothered to vote. STOP retweeting all your favourite celebrities’ own outbursts of pique, rage and anguish. STOP demanding the Electoral College reverse the decision in December.

In short, STOP being such a faux-tormented bunch of absolutely deluded cretins.

The examples I have found could fill multiple pages, but the point here is that these snowflakes are far more dangerous than we gave them credit for. More protests are being planned, up until the day Trump is to be sworn in as president and there is no indication that these people will stop then, especially the ones being organized by professional groups that are paying protesters and bussing them in to cause violence and start riots.

Trump’s election may already be showing signs of helping the economy, even before he is sworn in, and his policy stances on terrorism and immigration may mitigate the dangers coming from the outside after he starts implementing them, but the danger from within, has just increased exponentially.

Dear Snowflakes, it really is very simple…. ‘You can’t always get what you want, but  if you try sometimes, well you might find you get what you need.”