Donald Trump, Debt, and the Death of the Dollar

Donald Trump, Debt, and the Death of the Dollar

For the past few years, common wisdom has been that gold would go down as the Fed raises rates. That was a specious argument to begin with. As we saw earlier this year, gold rose in the first half as the Fed repeatedly balked on setting rates higher.

No matter. That was the old America. This is Donald Trump’s America now, and things are going to be vastly different than they were under Obama.

That’s true in many aspects, but today I want to focus on one — the dollar.

I’m not just making a blind guess here; I’m going by what Donald Trump has said. I’m looking at his web site and seeing a tax plan that is going to reduce government income… by a lot. The web site also outlines numerous spending measures.

That leads us to only one conclusion: The national debt is going to vastly expand under Donald Trump.

Donald Trump has absolutely no intention of paying that debt.

Again, this is something Trump himself has said explicitly.

So I say, again, that the U.S. dollar is going to go down — perhaps even due to an outright default.

Here’s how it’s all going to play out…

If there’s one thing we all know about Donald Trump, it’s that he likes to spend his money lavishly.

And his economic plans reflect that.

The first thing Donald Trump is going to do as president is give himself a tax cut. Remember, this is a man who openly bragged about dodging taxes in a debate. And though he refused to release his tax returns, leaked documents showed he could have used a “carried loss” of $916 million to avoid paying income tax for 15 years.

Once more, it’s not news that Donald Trump is allergic to taxes, and it should be obvious that he didn’t run for president to increase his tax burden.

Currently, we pay tax on “ordinary income” at graduated rates. There are currently seven rates, stretching from 10% (lower income) to 39.6% (higher income). The top rate kicking in once income exceeds about $470,000 if married, $418,000 if single.

Donald Trump has proposed cutting the seven brackets down to three: with 12%, 25%, with 33% rates.

Corporations stand to get a huge tax cut, as well.

Trump suggests a unified business rate of 15%. That means all business income — even the income earned by an individual from an S corporation, partnership, or sole-proprietorship and reported on the individual’s tax return.

That’s an enormous drop from the current top tax rate of 39.6%.

And what does this all mean for America’s bottom line?

According to the Tax Policy Center, the totality of the Trump plan will reduce federal tax revenue by $6.2 trillion over the next 10 years.

Donald Trump fancies himself a builder. And he wants to see America building more.

Namely, he wants to see America building a wall on the Mexican border. This was an infamous cornerstone of his platform.

Trump himself has said his wall could cost up to $12 billion, though a Washington Post study estimated the wall would cost $25 billion.

Of course we all know that Trump says Mexico will pay for this wall.

Well, if you believe that, then I have a bridge to sell you.

Mexico is not paying for Donald Trump’s border wall.

“At the start of the conversation with Donald Trump, I made it clear that Mexico will not pay for the wall,” Peña Nieto tweeted. He also called Trump “a threat to Mexico.”

This, again, should be obvious. Mexico currently has its own national debt of about $453 billion, which works out to about 43% of GDP. It’s not going to borrow another $12 billion, or $25 billion, and then give it to the U.S. government, which claims to be angry at Mexicans for crossing the border in the first place.

It’s an insulting thing to even suggest, frankly, and it would be a humiliating proposition for Mexico to accept.

It’s not going to happen…

And yet, Trump must also at least attempt to build the wall. It was a key promise to his supporters. To not fulfill it, of all promises, would be a resounding failure.

The bottom line: If that wall gets built, the U.S. government is paying for it.

And that’s not all.

At the end of October, some of his policy advisers laid out a paper outlining Trump’s infrastructure investment plan. Basically, Trump would provide $137 billion in tax credits to private construction companies willing to take on infrastructure projects.

Now, you may think that this will all be made up for somehow — perhaps through the entitlement reform or increased economic activity…

It won’t. None of this spending is accounted for. The non-partisan Congressional Budget Office has found just about $1.2 trillion in proposed spending cuts in Trump’s proposals. And combined with the gigantic drop in tax revenue, which the CBO estimates at $5.8 trillion, it will greatly increase the national debt.

By how much? The Committee for a Responsible Federal Budget estimates Trump’s plans would increase the debt by $5.3 trillion. That’s more than a third of the current $17 trillion total. 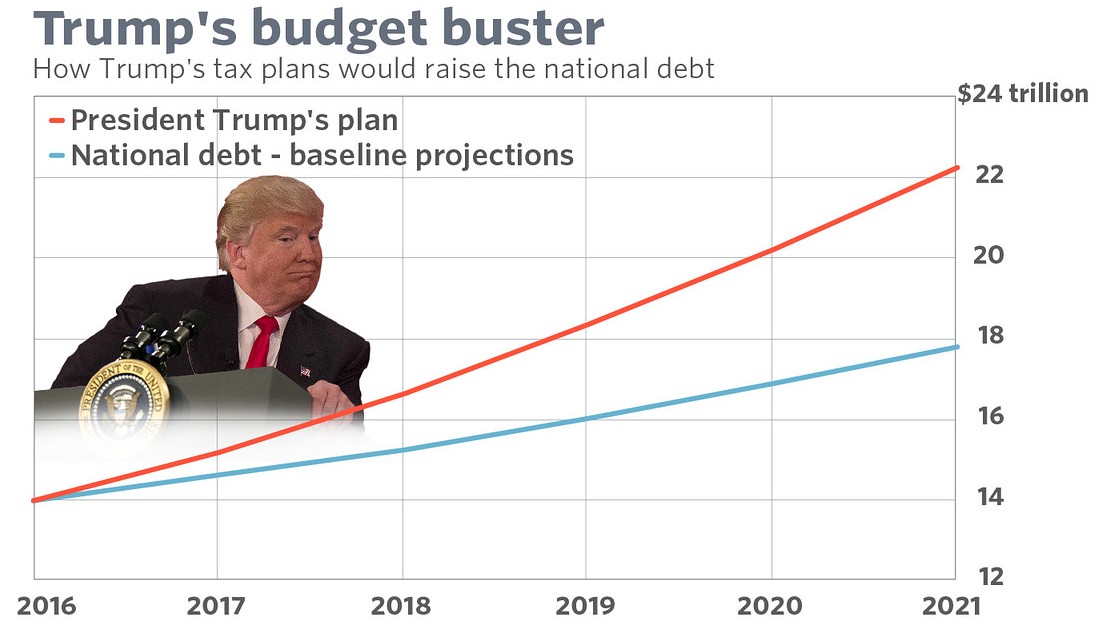 These are just the figures we can look at right now, mind you.

Trump has also pledged to “renegotiate” NAFTA, threatened an all-out trade war with China, and promised to drive every illegal immigrant out of the country. I’ll talk more about these later, but right now, their consequences are just about impossible to calculate.

Here’s what I do know, though…

Donald Trump may be rich but he’s no Lannister.

I grew up just outside of Atlantic City. My father has worked in the construction industry there for decades. I can tell you firsthand Donald Trump does not pay his bills.

Donald Trump has been targeted by more than 3,500 lawsuits over the past three decades, with a great many involving contractors and vendors that he refused to pay.

Analyzing 60 of those cases, USA Today found among them: “A dishwasher in Florida. A glass company in New Jersey. A carpet company. A plumber. Painters. Forty-eight waiters. Dozens of bartenders and other hourly workers at his resorts and clubs, coast to coast. Real estate brokers who sold his properties. And, ironically, several law firms that once represented him in these suits and others.”

Trump’s companies have also been cited for 24 violations of the Fair Labor Standards Act since 2005 for failing to pay overtime or minimum wage, according to data.

Trump says it’s because the work wasn’t good enough but that’s bullshit. This is his business model. He agrees to a deal, fails to fulfill the terms he agreed to once the job’s done, and then forces smaller, less wealthy entities into protracted court battles.

Bankruptcy is not a business strategy.

Now, you may be wondering, how does this pertain to the government and the dollar?

Simple. Donald Trump has explicitly stated he intends to run the U.S. government like his businesses.

He has zero concerns about the national debt, because he doesn’t believe we have any obligation to actually pay it.

Back in June Trump said: “I would borrow, knowing that if the economy crashed, you could make a deal. And if the economy was good, it was good. So, therefore, you can’t lose.”

And at a rally in May he said: “First of all, you never have to default because you print the money, I hate to tell you, OK?”

These are direct quotes. This is Donald Trump’s plan.

Drastically reduce taxes on corporations and the wealthiest people in the country. Spend big on infrastructure and border walls. Add more than $5 trillion to the national debt. And then either print enough money to pay it off, or convince creditors to take less than what they’re owed.