Trump Wins: What Next for Gold and Copper?

Trump Wins: What Next for Gold and Copper?

Results where once again the academics demonstrated just how tuned in to reality they are.

Politics aside, our job here at the Outsider Club is to identify ways to profit from the trends.

If you’re looking for ways to profit from the marijuana sector, Jimmy Mengel’s Crow’s Nest is an excellent way to get a deeper understanding of the sector and make a great profit while doing it. He even had a pick go up 100% in a couple of hours.

There are clear trends emerging in the resource space that I’ve written about for months.

In the June issue of Resource Stock Digest Premium I wrote:

“Combine the need for infrastructure spending with the availability of historically cheap money, stagnant growth in most economies, and trillions of dollars that could be looking for a home, and you have the perfect storm for a coordinated, large-scale program.

This won’t happen next month, it probably won’t happen this year. But if I’m right about Europe and Japan seeing capital out outflows that end up here in the U.S., and I’m right about the dollar having one last run that temporarily hits commodity prices across all sectors, then we will not only have a last opportunity to buy the best precious metals companies at incredible prices, but also some important base metal companies that can provide incredible returns.”

Regardless of who won the election, the one clear winner was always going to be copper. Both candidates had pledged significant investments in infrastructure and globally there is a need for sustained infrastructure spending.

The backlog of infrastructure projects is expected to cost $3.6 trillion by 2020, according to the American Society of Civil Engineers.

The President-elect has pledged a project to rebuild American infrastructure and with Republican control of both houses in Congress it’s a plan that he will be in position to deliver on.

Like many of his plans, Trump has been vague on specifics but has stated that he would at least double the $275 billion proposed by Clinton.

Short term, the types of gains copper has made may not be sustainable because I expect a stronger dollar to emerge.

In the long term, however, there will be several macro-catalysts that will include coordinated infrastructure spending and continued improvement in Chinese economic data that bode well for copper and the related copper stocks.

At Resource Stock Digest Premium we’ve been positioning ourselves for this since June and will continue to do so aggressively.

Gold touched the $1,336 level overnight once reality set in that a Trump presidency was likely.

As I write, the price has since retreated in a significant way and to me, signals lower gold prices in the short term.

There are several real issues that will now need to be addressed by President-elect Trump with more than a tweet.

We’re nearing the end of what Bridgewater’s ($160 billion hedge fund) Ray Dalio calls the end of the long-term debt cycle, characterized by a lack of spending despite interest rates near zero or even negative.
He said at a seminar a few weeks back at the Federal Reserve Bank of New York, that while central banks around the world will probably extend bond-buying programs, making higher-yielding assets seem attractive relative to bonds and cash, those investments are still expensive relative to their inherent risk.

“If that persists, betting on gold could prove preferable,” he said.
Distortions in the financial markets are reaching very delicate levels.

Dalio added: “It would only take a 100 basis point [1%] rise [in interest rates] to trigger the worst price decline in bonds since the 1981 bond market crash.”
In a world where currencies are becoming more and more underwritten by debt instead of growth, companies with real assets, assets like gold and silver, will become increasingly important for wealth preservation and accumulation.

The chart below (courtesy of macrotrends.net) compares the monthly percentage growth of the Federal Reserve balance sheet (U.S. Treasuries and Agency MBS) against the price of gold back to 2004. 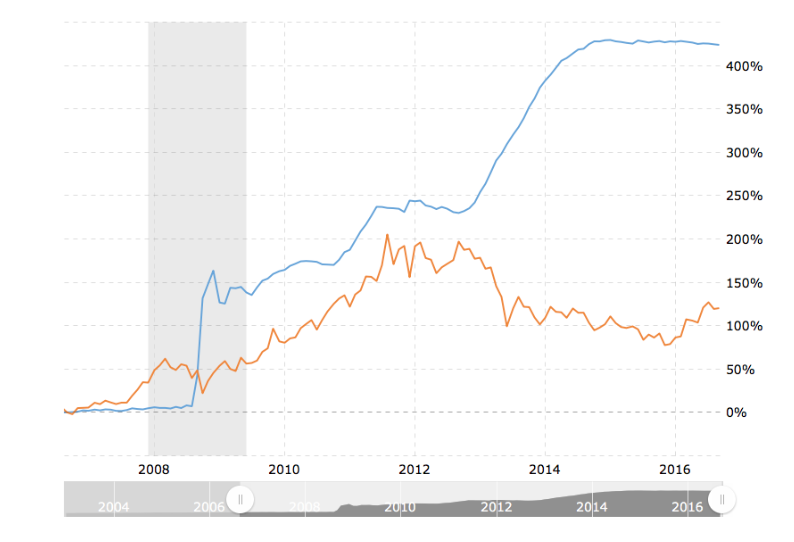 The day after the election, 10-year treasury yields topped 2.00% for the first time since January. A 29bps pop from the lows during the election.

Pay attention. These distortions are not sustainable and, as Mr. Dalio said: “distortions in the financial markets are reaching very delicate levels.”

Get yourself in position for an incredible 2017 of gains in this young gold bull market.

The dollar, gold, and the major U.S. stock exchanges will all see simultaneous new highs, but expect one last pullback in the price of gold beforehand.