It was a brutal and ugly campaign season but the election is over, so while it is expected that supporters of one side would be celebrating a win while supporters of the other side would be mourning a loss, the out of control chaos we are seeing right now is the direct result of years of pampering snowflakes and social justice warriors, and enocuraging dangerous, out of control psychopaths.

ASSASSINATION THREATS AGAINST TRUMP AND HIS SUPPORTERS SPIKE

The social media platform Twitter has erupted with calls for the assassination of President-Elect Donald Trump and in some cases calling for the death of Trump supporters. Tweets like “Trump ain’t president ’til inauguration day lmao you guys still have time to assassinate BOTH Trump and Pence, which was made on November 9, 2016 and Twitter has yet to remove it by November 11, 2016.

Another user states “I just pray that the first nigga who tries to assassinate Donald Trump don’t miss,” on November 8, 2016, and again Twitter has allowed to stay as of this morning.

In fact, each of the tweets shown in screenshots below and above, are still up and Twitter and the users have not had their accounts suspended despite the fact that they violate Twitters rules, which states clearly “Violent threats (direct or indirect): You may not make threats of violence or promote violence, including threatening or promoting terrorism.” 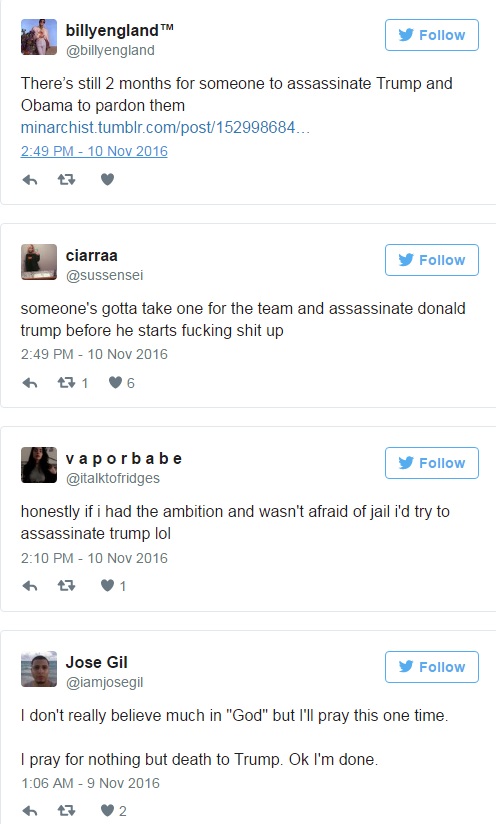 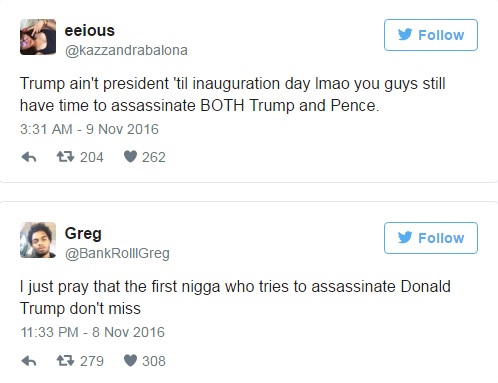 It is not just Twitter, but also on Facebook, there are an astounding amount of results when the word “assassinate” in plugged into their search bar, screen shot below:

Following those searches we see articles detailing how rappers are calling for Trump’s death, protesters want to “kill people who voted for Trump.” Granted not all the results bring up threats against Trump, some are just reporting of threats against Trump, but the point here is these psychopaths have been encouraged time and again over the past years to simply do what they want with no ramifications and the result is this!

Over at Steve Quayle’s website we see a link to a Daily Mail article a war photojournalist had to be hospitalized after a “savage beating by four anti-Trump activists while covering the protests in Oakland,” where many believe protesters were deliberately organized and paid for. Other links found at Steve’s site show the NOLA monument was vandalized by anti-Trump protesters with the words “Die Whites Die,” and an 11 year-old boy was beaten in school for admitting he voted for Trump in the school’s mock election.

In colleges around the nation, social justice warrior snowflakes are proving once again that the policies of coddling these children, treating them like they are daycare or Kindergarten rather than preparing them for life after school, are turning them into young adults incapable of dealing with reality in any form if it doesn’t fit with their own ideology.

Wall Street Journal reports that the staff at Cornell University were providing tissues and hot chocolate to students that decided to have a “cry-in” to mourn Hillary Clinton’s loss in the November 8, 2016 presidential election. Over at University of Michigan, they offered a safe space for students giving them play-Doh and coloring books…. yes, you read that right. College-aged kids are literally being treated like 3 year-olds, which is the age listed on the Play-Doh boxes sold in stores, as seen in the image below. 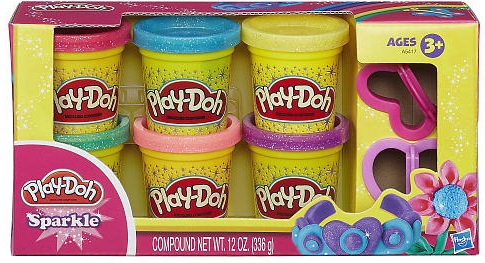 Rudy Giuliani has been quoted as calling these kids “crybabies,” to which Quayle left an awesome SQ note, stating “PROZAC DIPPED BINKIES AND ELECTRO SHOCK DIAPERS AND I WOULD SUGGEST A NEW DEGREE IN SANDBOX PLAY TIME EVENTS.”

Let me be very clear here….it is not just the coddling that is turning these snowflakes and so-called social justice warriors into our future psychopaths, it is the teachers own ideology and how they are indoctrinating these college students into their own political belief system, as evidenced by the quotes given by the director of multi-ethnic student affairs at the University of Michigan, Trey Boynton, who stated “A lot of people are feeling like there has been a loss. We talked about grief today and about the loss of hope that this election would solidify the progress that was being made.”