Were the massive coast-to-coast outages back on October 21, 2016 a Beta test by U.S. government hackers in preparation for the possibility of interfering in the November 8, 2016 presidential election if the candidate the Obama administration opposes happens to take the lead during the day and evening?

Keeping those outages in mind, to which may have come from within, as we delve into the unprecedented announcement made three days ago, using the Washington puppet media to spread their propaganda, informing Americans that U.S. government hackers are prepared to interfere on election day, while preemptively blaming Russia for an “attack” that has not happened.

In the article, U.S. government sources clearly warn of the possibility of cyberwar with Russia in the near future. The article foreshadows a new likely talking point: that U.S. government hacker interference in the election is necessitated by supposed Russian aggression.

There are a couple of very interesting quotes provided by Breitbart from the original NBC News article, but we are going to start with the “interference” issue first because we note that as most of us were sleeping, both Wikileaks and Twitter, where Wikileaks announces their newest releases while linking to them, suffered DDoS attacks and outages, around the same time.

Those attacks came after the release of The Podesta Emails Part 33 and their brand new #DNCLEAK2, with 8263 new emails from the DNC. 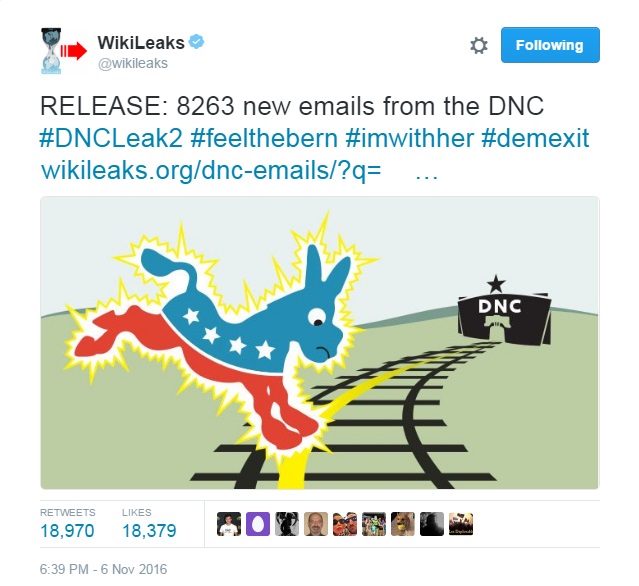 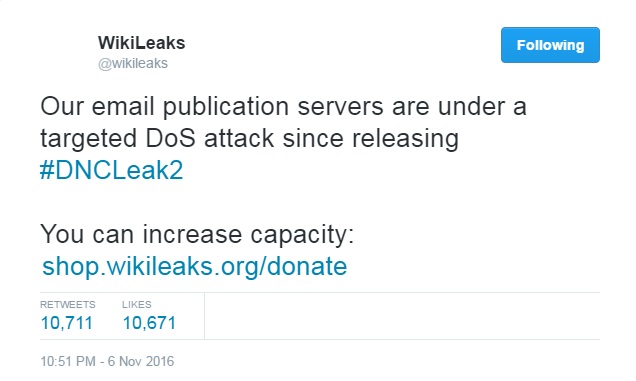 Remember, the Obama administration, Democrats, the political establishment and liberals across the board have been blaming Russia for being behind the Wikileaks releases that have been so damaging to Hillary Clinton, the DNC and even Barack Obama as they proved without a doubt that contrary to his assertion that he wasn’t aware of Hillary Clinton using a private email server against policy, he was actually using a false name and emailing with her on said server.

Wikileaks founder Julian Assange has denied Russia was behind the leaks, Russian President Vladimir Putin has denied Russia was behind the leaks, and former U.S. intelligence officials have admitted and gone public stating a group of intelligence agents from a variety of U.S. agencies were the ones that handed the information over to Wikileaks to prevent a silent coup by Hillary Clinton to take over America, with the help of Barack Obama.

Despite all that, the Obama administration continues to blame Russia for being behind the Wikileaks hacked email releases, providing no evidence to the American people, basically saying “trust us, we know.”

Take a moment to stop laughing, or crying, or whatever emotion just hit when we think of Obama saying “trust us.”

The next very interesting quote from the NBC News report that Breitbart quotes, shows us the U.S. government is not even attempting to be subtle in their propaganda because those that get their news from the Washington puppet media are too clueless to even connect the dots, shows us how they are trying to preemptively convince Americans that any game-changing, damaging new documents that might be released will possibly be “faked.”

U.S. officials continue to express concern that Russia will use its cyber capabilities to try to disrupt next week’s presidential election. U.S. intelligence officials do not expect Russia to attack critical infrastructure — which many believe would be an act of war — but they do anticipate so-called cyber mischief, including the possible release of fake documents and the proliferation of bogus social media accounts designed to spread misinformation.

Once again showing that the Obama administration is colluding with the Hillary Clinton campaign in their propaganda campaign comes just days after the NBC News report, when Hillary for America communications director Jennifer Palmieri tweeted “please remember that if you see a whopper of a Wikileaks in next two days – it’s probably a fake.”

Can they be more obvious?

Here is another very concerning quote from Washington Post, who insists that we may see election day tampering but it won’t change the results, but could affect  “the systems that report results to the public on election night.”

On the other hand, voter registration systems and the systems that report results to the public on election night are connected to the Internet — which means they’re vulnerable to attack.

That little gem is hidden within the article, but brings up a whole host of highly disturbing possibilities should the election not go the way ‘The Powers That Be’ want it to.

ANP will be following election day with an all-day open thread, but now another member of the Washington propaganda arm is telling us that the results we see publicly, and update the thread with throughout the day and night, might not be the actual results????

So, if we see Donald Trump winning tomorrow, and all of a sudden the U.S. hackers  “interfere,” and when everything comes back online…. the “results” we had been watching all day could be different… OH, and it will all be Russia’s fault!

Anyone else smelling something really rotten here?

Perhaps now it is time to remember Wikileaks’ founder Julian Assange assertion in his most recent interview “Trump would not be permitted to win.”

Segment below and the entire interview beneath that.