Back in April 2016, a Hillary Clinton SuperPAC called ‘Correct the Record’  issued a press release blatantly informing the public they would be spending more than a million dollars to pay Clinton trolls and shills to “engage in online messaging both for Secretary Clinton and to push back against attackers on social media platforms like Twitter, Facebook, Reddit, and Instagram.”

If their own press release isn’t enough to convince people that they not only exist, but are actually being paid to infiltrate social media, comment sections and forums across the Internet, perhaps the documented payments to individuals from Correct the Record, list at the Federal Election Commission website, will.

For those that would claim “well it is only one SuperPac,” we will remind them that back in 2007, the Clinton campaign was busted for the same type of trolling, registering to sites anonymously, using multiple names for the same one person, also known as “sock-puppets,” to boost pro-Hillary commentary and counter anti-Hillary attacks.

As the comment thread revealed, users pinballwizard, elf, shley24, MTAY all registered in succession to recommend the diary. A further look by us revealed that:

* they had registered within minutes of each other, including another user a bit later, janbaby, who was not among the recommenders,

* the same IP address was used by all of them, and is registered to the Clinton campaign,

* two other recommenders, blues and kmeisje, also registered from the same IP address.

The point being these paid trolls/shills exist, are paid to ramp up support for Clinton and to attack the GOP nominee for president Donald Trump using whatever methods are the most productive dependent on what type of forum they are working at the moment.

For example, like cockaroaches swarming to left out food, they have converged on the popular social website Reddit, up-voting pro-Hillay threads en masse so they are seen by a wider audience and down-voting pro-Trump threads en masse to prevent them from being seen by a wider audience. This has been noted to the extent that Reddit users have now “declared war on Hillary’s paid Internet trolls.”

One of the top posts on /r/DNCLeaks right now states, “CTR is in here heavy today. Make sure you are generous with your upvotes and downvotes to counteract these jerks.” That post currently has 1,143 points (the number of upvotes a post receives, minus the number of downvotes).

“I think they are making a final 2 week desperate push for their terrible candidate,” reads one of the post’s top comments, from a Redditor who goes by the username “SchlangeHatRecht.”

“Stupid CTR slaves… Get a life and/or a conscience instead of being a propaganda slave for a power that apparantly needs propaganda,” another user –”letusfake” — commented.

“CTR is being shifty. They downvote comments to ‘1’ but not below so it doesn’t look like them shilling. They’re trying to make us seem low energy; we’re not. We’re MAGA!” reads one popular post on subreddit /r/The_Donald, which is the largest pro-Trump subreddit on the site with more than 240,000 subscribers.

“CTR Downvoted the HELL out of my post proving the Podesta emails are verified to be 100% real and accurate. Here’s the PROOF again. (don’t let them downvote it again)” another person posted on /r/The_Donald on Thursday.

Reddit is not alone in noticing this type of manipulation as Facebook has people flagging pro-Trump posts, then censoring them, as well as supressing conservtive news from their trending news feed, and Twitter is shadowbanning conservtives, just to name some examples of how prevalent this has become. 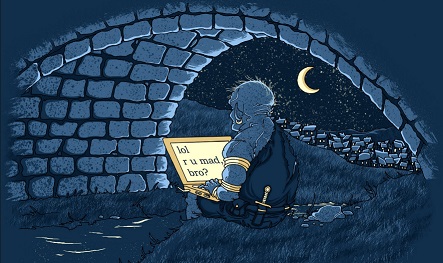 HOW TO SPOT INTERNET TROLLS/SHILLS

Paid trolls/shills are not simply trolls that spam a comment section with advertising (RE: Jim the boot guy!), or with get rich schemes, yet they do use some of the tried and true tactics of regular trolls, which much to my surprise in researching Internet trolling, I found there are over 100 different types of trolling, a list put together by DARK PSYCHOLOGY.

While I won’t list all 100 types of trolling, I will highlight what has been noted in almost any type of forum that allows commenting, whether it is a website that allows comments like ANP, or Facebook posts which allow people to weigh in, or Twitter where they 140 characters to troll others, any format that allows interaction.