If Democrats take the White House and Congress in the coming election cycle, guns stores throughout the country are gearing up for a major run on firearms and ammunition. 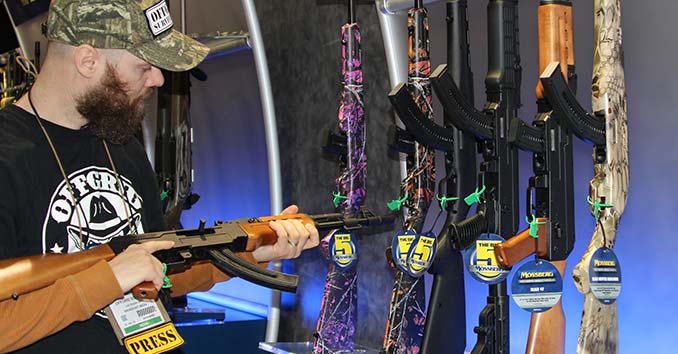 For the 17th month in a row, firearm sales have smashed all previous sales records. In September of this year, the FBI processed more gun-related background checks than any other month on record.

The record-breaking trend began in May 2015, when 1,580,980 checks set the record for the highest number of background checks performed in any May on record. Since then the record breaking pace has continued month after month, smashing previous monthly records in some cases by an additional 600,000 background checks in a single month.

A large part of the spike in sales can be directly attributed to the coming election. People have been nervous for the last eight years; President Obama has signed dozens of unconstitutional executive actions throughout his presidency, something that has caused record-setting gun sales and runs on ammunition, especially on common rounds like 9mm and .22lr.

For over three years now we have seen huge problems in the .22lr ammunition market, with manufacturers struggling to keep up with demand. It’s not uncommon to see people lining up at gun stores at 6 am, waiting in huge lines just hoping to score a box of .22lr ammo.

But what has people most nervous is what Presidential Candidate Hillary Clinton has said she would do when she gets into office.

At an election rally last October, Democrat candidate Hillary Clinton told a crowd of supporters that if she wins the Presidency, she plans on banning private gun sales without a background check and allowing gun violence victims to sue firearms manufacturers – a move many experts say could bankrupt the industry.

Even more troubling, is the fact that so many Democrats seem to be gearing up for what they see as their chance to enact some of the most restrictive gun laws and regulations we have ever seen.

In a series of undercover investigations over the last year, investigative reporter James O’Keefe exposed Democrat plans to ban all guns through an executive order.

While at the fundraiser, which was hosted by Clinton friend and donor Amy Rao, a Project Veritas journalist spoke with former Senator Feingold and his donors about gun control. When asked what Hillary Clinton would do about the Second Amendment, Feingold said without hesitation, “Well, there might be an executive order.”

Earlier in the year, Project Veritas released another video of Hillary Clinton Campaign Delegate Mary Bayer admitting that when Democrats say “common sense gun legislation” they are really just trying to trick the public into supporting gun bans. She told the undercover reporter “Saying you want to ban guns altogether, that’s going to piss everybody off.”

OFFGRID SURVIVAL is a preparedness/survival website that is dedicated to helping people become more self-reliant and better prepared to face the very real threats that exist in today’s world. The site covers a wide variety of survival and preparedness topics, including information for surviving man-made and natural disasters, urban disasters and crime, and self-reliance and off-grid strategies that can help you survive almost any crisis. Knowledge is the key to survival, without it you don’t stand a chance! OFFGRID SURVIVAL started in 2007, as an online magazine and resource for people who are interested in survival, preparedness, self-defense, and Off Grid Living. Feel free to look around, and make sure to come back often. We update the site on a daily basis so there is always a new article or piece of information that will interest you .