While we’re quite certain that the mainstream media will continue to destroy itself by not pounding these latest Wikileaks revelations that should completely bring down the presidential aspirations of democratic candidate Hillary Clinton, we’ll join with Heat Street and do our very best to make sure these latest bombshells see the light of day.

While it’s well known that Donald Trump not only DOESN’T drink alcohol now but has NEVER drank alcohol after losing his brother Fred to alcoholism, one of the latest Wikileaks email bombshells shares with us a conversation between Clinton campaign chairman John Podesta and communications aide Jennifer Palmieri as seen in the email below.

In a frantic exchange back in August of 2015 that began with a question from Podesta to Palmieri at 1:55 pm in the afternoon, Podesta wrote: “Should I call her and talk this through or better to leave with you?” He continued: “I’m worried she’ll get on with Cheryl [Mills] and we’ll end up in a bad place.”

As we’re told within the Heat Street story, Palmieri wrote back more than two hours later with the response:

“I think you should call her and sober her up some.” 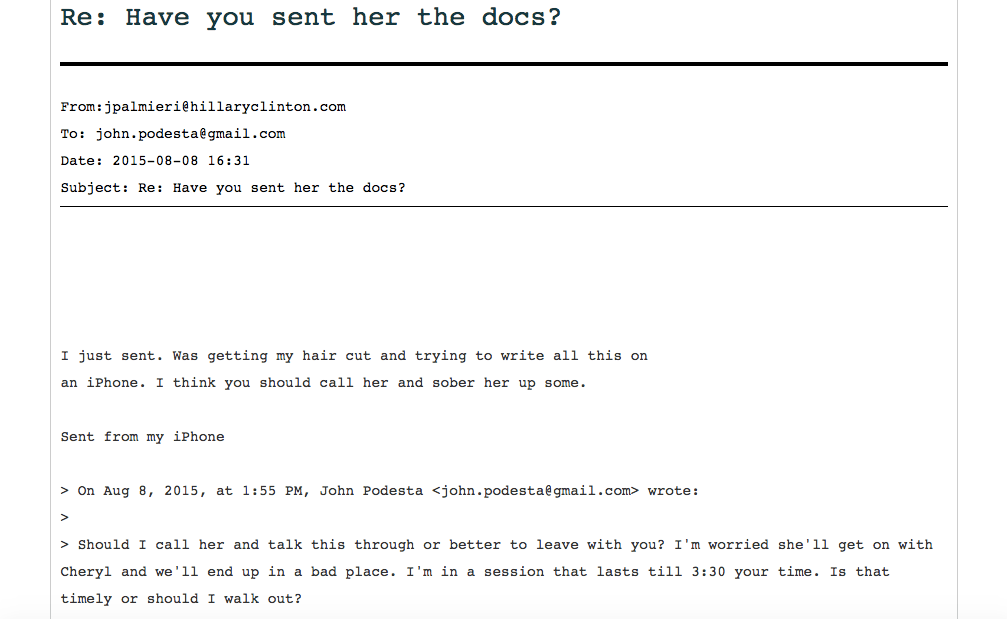 Within this story on ANP we’ll take a look at several more new Wikileaks revelations about Hillary Clinton’s ‘state of mind’ and her capability to be our ‘commander in chief’ including close aide Huma Abiden‘s 2015 email statement that ‘Hillary still isn’t right in the head‘ and another close aide who claimed “Hillary’s instincts can be terrible”.

After 8 years of Barack Obama, does America really need someone in office who ‘isn’t right in the head’ and whose ‘instincts can be terrible’? We’re happy to report that Hillary’s closest insiders are now dropping these ‘judgement day bombshells’ upon her ‘already broken head’.

We also take a look below at a new SQAlert from Coach Dave warning us that the globalists are preparing to steal the election for Hillary with proof coming to us directly from globalist insider Barack Obama as heard in the first video below. We also invite ANP readers to have at it with any new ‘Hillary drunk Meme’s’ you might want to have fun with in the comment section below. 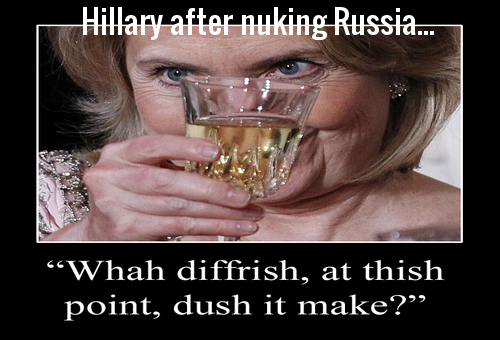 While much of this presidential race has devolved into a sordid ‘who groped who’ bash with the mainstream media now absolutely desperate in their attempt to takedown Donald Trump, we have to ask, who would YOU rather have with their hands on the controls of our nuclear buttons at 2 o’clock in the afternoon: A total lush or someone with a sober head?

We can hear the evil witch already, babbling in a drunken stooper: “Just bomb the hell out of them – what difference does it make!”

As someone who has battled alcoholism, I’ll be the very first to admit that ‘back in the day’ when drunk, I made some very poor decisions. Anybody who has been drunk before knows they’re incapable of thinking right after too many drinks. It’s only through the amazing Grace of God that I am here today, sober though still quite imperfect.

Everybody knows it’s illegal to get behind the steering wheel of a car and drive while drunk – it puts not only one’s self but others in grave, existential danger. Does America really need a drunk behind the wheel in 2017 as we facedown ISIS terrorists who have declared war upon Western civilization and a potential war with Russia that seems more and more likely every day if Hillary somehow ‘steals her way into office’? 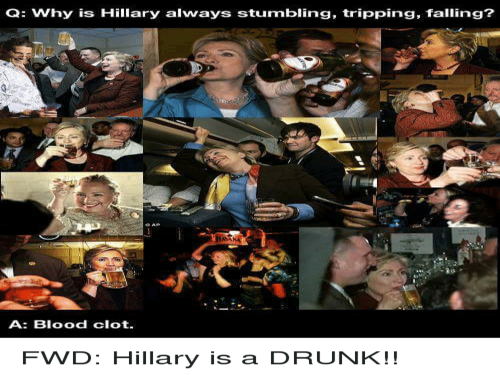 The Podesta email calling out Hillary as drunk before 2 o’clock in the afternoon isn’t the only thing proving we’re dealing with a nasty drunk running for president of America who’d be arrested for what she was doing if she was driving a car instead of attempting to drive America off of the cliff.

Hillary has a long history of proving herself and more than just alternative news readers and her close aides are starting to notice it. Back on September 18th, Sunshine State News asked if Hillary was “Drugged, Drunked or Just Sleepy” after social media lit up like a Christmas tree after her subdued and despicable response to a bomb that went off in midtown Manhattan, injuring more than a dozen. On September 22nd, Downtrend asked if Hillary was drunk, on drugs or just crazy after she went ‘lunatic fringe’ during another public statement. Their story also told us that “Hillary was just warming up the cuckoo machine”. 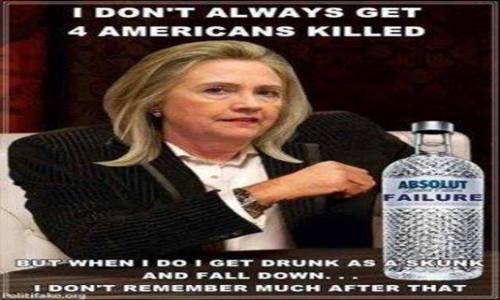 Are we going to just hand over the keys to America to an ‘Absolut failure’ who can’t even walk without the assistance of 2 or 3 secret service agents much of the time and who quite obviously belongs in alcohol rehab rather than the White House? The way she talks down to Secret Service agents and law enforcement officers who’d take a bullet for her if necessary is repulsive to say the least.

While we’ll be the first to admit that we don’t like everything about Clinton’s opponent in less than two weeks, the fact that Donald Trump is stone cold sober while Hillary has a long history of no brains, no courage and no heart to go along with her drunken stupors proves to us beyond a doubt that Trump is the only hope that America has and Clinton will lead America over the edge. 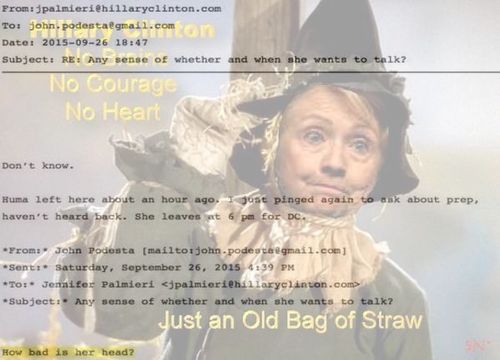 Despite the fact that Trump appears to be absolutely crushing Hillary Clinton with huge crowds responding wherever he goes while Clinton struggles to draw just about anybody, the globalists are preparing to steal this election from Trump as shared in the new SQAlert directly below from Coach Dave. Coach Dave’s warning is confirmed for us in the words coming straight from the mouth of Obama in the first video in which he proves to us that the Democrats are very good at ‘stealing’ elections.

VOTER FRAUD EXPLODING – IS THIS MEANT TO BE THE PLACE WHERE TRUMP WINS POPULAR VOTE BUT LOSES ELECTORAL VOTE THAT INITIATES UPRISINGS ALL ACROSS THE U.S.

Steve, I got this alert from a friend who went to the early voting center in Columbus today…I was there 4 years ago and watched them bus in hundreds of Muslims to vote…I know his complaint is legit…

Dave, I was really bothered going to the polls early yesterday knowing I needed to confirm they got my change of address. Reading on line for change of address bring a utility bill ,drivers license. Well got there and was told my update is not up dated yet. Because of that they sent me in a room with so many Moslem’s and all talking to each other in different language. I sit next to them and manually writing in my votes and up dating my address. I ask the poll worker if they needed to look at my driver license and or utility bill to confirm my new address. She said no we don’t need to you just signed a affidavit. I said well who is going to verify this before the actual election. No reply! This is pretty darn scary. Pray for our country please with me… 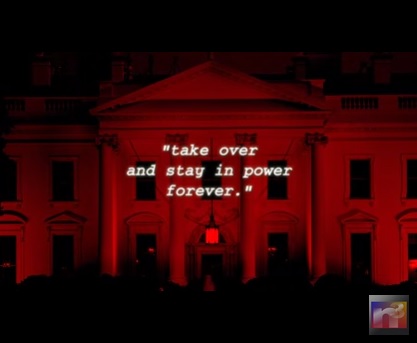 In the 2nd video below we hear from Infowars via Wikileaks massive evidence that Hillary’s camp is now doing everything in their power to make sure Hillary is the next president, rigging every aspect of the election in less than 2 weeks. How will the American people react if there is an outright steal of this election by the drunk and her globalist peons?

As we hear in the 3rd video below from the X22Report featuring Rob Kirby from Kirby Analytics, the globalists have been pushed into the position where they may be planning something absolutely diabolical to suspend the elections outright if it appears Hillary is going to lose on November 8th. And as we’re told in the final video below from Pravda, with stress and chaos mounting up even PRIOR to the election, bloodshed is predicted in the US after the elections with some experts predicting the chance of America staying calm at only 5%.

While they outline these dire scenarios for us, we believe this is a perfect opportunity for America to prove the world wrong with rapidly awakening Democrats, Republicans and Independents realizing the only REAL chance America has is Trump and unifying behind him in a massive, peaceful overthrow of the entire corrupt and broken system.