Tension between the U.S. and Russia has escalated to the point where now we even see the mainstream media speaking of “global war,” and “outright conflict” as well as the possibility of nuclear confrontation.

U.S. HAS BEEN PREPARING FOR WWIII WHILE AMERICANS HAVE BEEN KEPT IN THE DARK

If the American people, those that get their “news” by reading the NYT, Washington Post, watching CNN, or some other mainstream media source, are now wondering why all of a sudden everyone is talking about war, it is because Americans have been deliberately kept in the dark over the last few years about how the U.S. government has been making prepartions for a nuclear conflict.

The MSM has trickled a little information here and there, while downplaying the importance of certain stories, such as the April 2015 news that NORAD and the Pentagon were moving their communications equipment to Stargate Mountain, the cold-war era Cheyenne Mountain bunker that’s naturally EMP-hardened.  That raised massive red flags for ANP and other alternative news sites, as we warned the U.S. government was making preparations for World War III.

Cheyenne Mountain, referred to as the “shelter of last resort,” was originally built to help military commanders survive a direct Soviet nuclear attack, according to USA Today.

The caves are locked behind 23-ton blast doors, just some of the catastrophe-ready features that have captured the imagination of sci-fi buffs who sometimes climb over the perimeter fences looking for a fictional Stargate or hidden aliens. Trespassers typically get arrested before they even get near the bunker’s front doors, reached by driving a mile through a tunnel carved out of solid rock.

Via AFP, April 7, 2015, we see words that should send a chill up the spines of anyone paying attention to the headlines of this week:

Admiral William Gortney, head of NORAD and Northern Command, said that “because of the very nature of the way that Cheyenne Mountain’s built, it’s EMP-hardened.”

“And so, there’s a lot of movement to put capability into Cheyenne Mountain and to be able to communicate in there,” Gortney told reporters.

“My primary concern was… are we going to have the space inside the mountain for everybody who wants to move in there, and I’m not at liberty to discuss who’s moving in there,” he said.

We can assert with 100 percent assuredness, that those reading this, and typical every day Americans, won’t be the ones “moving in there,” when it all hits the fan. The people moved to the bunkers will be politicians, high level military members and their families and U.S. government officials, while the rest of Americans will be left to fend for themselves.

Then we have all the articles on how the “elite” and are building their bunkers and boltholes, buying up land with private airstrips… which should have been highlighted in the American MSM, but it wasn’t, that news was reported back in September 2015 by foreign news outlets. 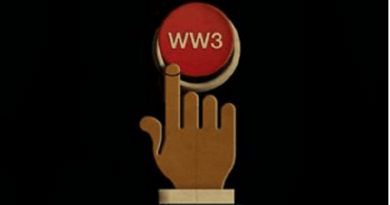 WORLD WAR III IS ON THE DOORSTEP

In June 2016, Russian President Vladimir Putin issued a severe warning to journalists, making it very clear that World War III, a nuclear war, was on our doorstep, losing patience with how the severity of the situation was being hidden from the world.

Putin stated “We know year by year what’s going to happen, and they know that we know. It’s only you that they tell tall tales to, and you buy it, and spread it to the citizens of your countries. You people in turn do not feel a sense of the impending danger – this is what worries me. How do you not understand that the world is being pulled in an irreversible direction? While they pretend that nothing is going on. I don’t know how to get through to you anymore.”

Now the MSM is starting to understand how close WWIII truly is, and are rushing to “inform” Americans of the “official narrative,” ignoring the fact that Putin has been waving the red flag, warning the world what is happening, Washington’s message is “it is all Putin’s fault,” but in these recent reports, they are finally admitting there is “outright conflict.”

—- Meanwhile, Moscow abruptly left a nuclear security pact, citing US aggression, and moved nuclear-capable Iskandar missiles to the edge of NATO territory in Europe. Its officials have openly raised the possible use of nuclear weapons.

And that’s just the highlight reel.

—- “The quality of relations between us is certainly at the lowest point since the Cold War,” said Russia’s ambassador to the US Sergey Kislyak. “The risk of miscalculations has increased,” especially with NATO forces “being deployed next to our borders,” Kislyak said in remarks at Johns Hopkins School of Advanced International Studies.

The ambassador said that “normal channels of communication are frozen” between the US and Russia. “We see the United States taking unfriendly steps toward Russia including sanctions, there are calls for isolating Russia,” he said, adding, “it doesn’t work with Russia and it’s not going to work.”

Once again it is foreign news outlets reporting that Russia is actively preparing their people for the possibility of a “global” nuclear war.

Via an article by the UK’s Daily Mail, titled,  “Russia orders all officials to fly home any relatives living abroad, as tensions mount over the prospect of a global war,” we see that “politicians and high-ranking figures are said to have received a warning from president Vladimir Putin to bring their loved-ones home to the ‘Motherland’, according to local media.”

According to the Russian site Znak.com, administration staff, regional administrators, lawmakers of all levels and employees of public corporations have been ordered to take their children out of foreign schools immediately.

Russian political analyst Stanislav Belkovsky is quoted as stating “This is all part of the package of measures to prepare elites to some ‘big war’.”

That was on October 12, 2016, and just two days later, October 14, 2016… today, we see that state run Russian television is telling civilians to find out where their nearest bomb shelter is.

One apocalyptic broadcast told viewers on Moscow’s state-owned TV channel NTV: “If it should one day happen, every one of you should know where the nearest bomb shelter is. It’s best to find out now.”

On October 2, 2015, ANP reported on an evacuation drill that was being conducted by Russia that would see 40 million people participate. That drill was referenced again yesterday by ABC News in regards to a story about Russian television warning their citizenry to find their nearest shelter:

Anti-Americanism is not rare on Russian state news, nor is an inclination for the apocalyptic. But more notable than the intensity of the warnings has been how Russian government ministries have joined in the alarms in recent weeks. Since September, Russia has conducted a nationwide civil defense drill, purportedly involving 40 million people, preparing them for catastrophes — among them nuclear fallout. Russia’s military announced who would run the country in the event of war and ran an exercise simulating that in the south. The governor of St. Petersburg clarified what bread rations people could expect should Russia come under attack (300 grams for 20 days).

Which brings us to the headlined quote from Vladimir Zhirinovsky, reported as an “ally of President Vladimir Putin,” known for his over-the-top rhetoric and flambouyant personality, but also described by Reuters as a “faithful servant of Kremlin policy, sometimes used to float radical opinions to test public reaction,” who states “Relations between Russia and the United States can’t get any worse. The only way they can get worse is if a war starts.”

He then goes on to warn Americans of the stakes of the U.S. presidential elections, by saying “Americans voting for a president on Nov. 8 must realize that they are voting for peace on Planet Earth if they vote for Trump. But if they vote for Hillary it’s war. It will be a short movie. There will be Hiroshimas and Nagasakis everywhere.”

How many warnings will we see before we hit the point of no return and the bombs start dropping? How much evidence needs to pile up showing how close the world is to an all-out nuclear war before the American people, deliberately kept in the dark by the MSM, get a clue?

While we all understand that no one can “win” if nuclear war breaks out because hundreds of millions will die, we can say that Americans will lose more than Russians because they have bomb shelters provided by their government, we do not. Our high level military does, our politicians do, our rich and elite do, our U.S. government officials do…. but American citizens do not.

What does that say about our leaders?