Big Surprise! The media are all outraged, infuriated and figuratively foaming at the mouth, once again, at Trump’s latest antics when he declared he would be offering a “major” statement, so they all rushed their reporters and cameras to his brand new Trump International Hotel in Washington D.C., with the assumption that Trump would be talking about the Obama birth controversy otherwise known as the “birtherism” issue.

Before mentioning anything about the issuethat all the cameras and journalists were covering live, Trump handed the stage over to Medal of Honor recipients, generals and war veterans, all praising Trump and endorsing him for the presidency for over 20 minutes, before taking the microphone himself again and stating “Hillary Clinton and her campaign of 2008 started the birther controversy. I finished it. I finished it. You know what I mean. President Barack Obama was born in the United States, period. Now we all want to get back to making America strong and great again. Thank you very much.”

While watching the complete and utter conniption fits by members of the media is quite entertaining as they are hoisted by their own petard, after they  basically handed Trump 30 minutes of free coverage so their veiwers could see all these former military Medal of honor recipients praising Trump, that truly isn’t the the point.

What Trump really did is highlight the point that it was members of Hillary Clinton’s 2008 campaign that brought the “birther” issue into the mainstream.

People like CNN’s Jake Tapper instantly declared Trumps assertion to be false, but McClatchy DC points out that  it was a Clinton ” Iowa campaign worker had passed on an email about the birther conspiracy,” then she was thrown under the Hillary bus and fired, and Clinton “confidant” Sidney Blumenthal pushed for an investigation into Barack Obama’s birth place.

Meanwhile, former McClatchy Washington Bureau Chief James Asher tweeted Friday that Blumenthal had “told me in person” that Obama was born in Kenya.”

“During the 2008 Democratic primary, Sid Blumenthal visited the Washington Bureau of McClatchy Co.,” Asher said in an email Friday to McClatchy, noting that he was at the time the investigative editor and in charge of Africa coverage.

“During that meeting, Mr. Blumenthal and I met together in my office and he strongly urged me to investigate the exact place of President Obama’s birth, which he suggested was in Kenya. We assigned a reporter to go to Kenya, and that reporter determined that the allegation was false.” 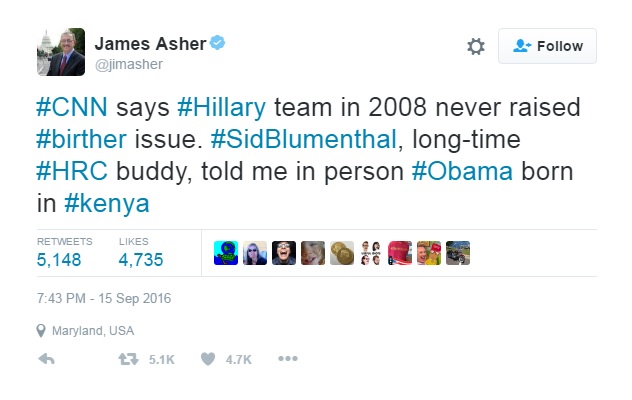 Now of course people like Tapper, who already publicly claimed Trump’s statement was untrue, is now doing his research…. you know, rather than before opening his mouth on national television:

While McClatchy only highlights the campaign worker and Blumenthal, those of us covering the 2008 election remember other things, such as Mark Penn, who served as chief strategist to Hillary Clinton’s campaign for president in 2008, sent out a strategy memo, dated March 19, 2007, quoted and explained by The Atlantic in August 2008–  “More than anything else, this memo captures the full essence of Mark Penn’s campaign strategy–its brilliance and its breathtaking attacks. Penn identified with impressive specificity the very coalition of women and blue-collar workers that Clinton ended up winning a year later. But he also called Obama “unelectable except perhaps against Attila the Hun,” and wrote, “I cannot imagine America electing a president during a time of war who is not at his center fundamentally American in his thinking and in his values.” Penn proposed targeting Obama’s “lack of American roots.”

A number of flashback articles highlighted by The Drudge Report after Trump’s statement, reminds readers that the Obama campaign manager David Plouffe accused the Clinton campaign of 2008 of “shameful offensive fear-mongering” by circulating a photo of Barack Obama “dressed as a Somali Elder, during his visit to Wajir, a rural area in northeastern Kenya.” 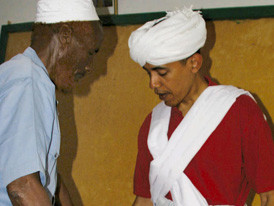 Plouffe said in a statement: “On the very day that Senator Clinton is giving a speech about restoring respect for America in the world, her campaign has engaged in the most shameful, offensive fear-mongering we’ve seen from either party in this election. This is part of a disturbing pattern that led her county chairs to resign in Iowa, her campaign chairman to resign in New Hampshire, and it’s exactly the kind of divisive politics that turns away Americans of all parties and diminishes respect for America in the world,” said Plouffe.

Another flashback article from 2008 highlighted by Drudge was by the Telegraph indicating that the Clinton campaign sent the image above to the Drudge Report during the 2008 campaign season.

Politics 101 folks, campaigns often use their staff and/or surrogates to push a narrative while the candidate pretends to be above the fray, giving them plausible deniability and considering the Clinton’s history of dishonesty and lack of transparency, only die-hard Clinton supporters will deny the possibility that the Clinton campaign of 2008 is responsible for making Obama’s birth place a mainstream discussion.

Not only did Trump troll the media television talking heads, but he has once again managed to give Hillary Clinton’s campaign yet another issue they will have to deny and address in some manner, all while getting his campaign a ton of free coverage because the media wanted their “gotcha” moment.

Below is the event that has the media totally hysterical and if veiwers scroll to the last two minutes, you can hear reporters literally screaming questions while the speakers ingore them and close out the event. 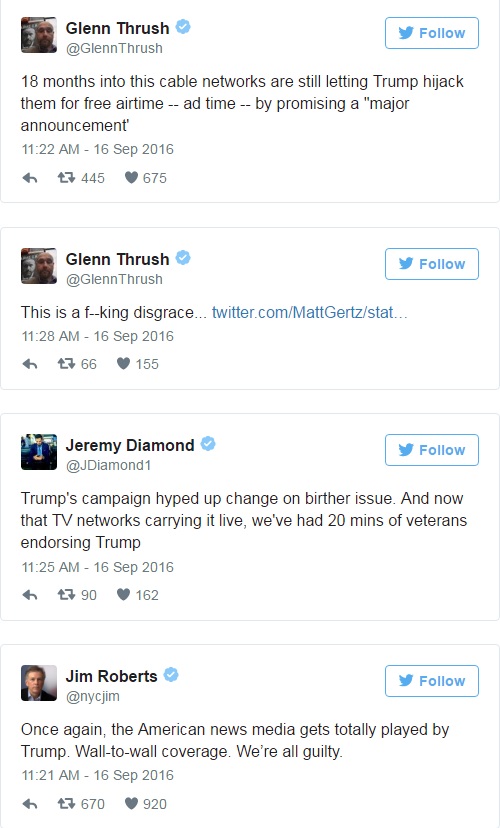 Hillary Clinton isn’t exactly thrilled the media gave Trump all that free airtime in the hopes he would say something they could use against him either, but of course it is all Trump’s fault!

Via Twitchy with the headline “Pass the popcorn! Journos complain about press ‘getting played’ by Trump, keep covering Trump,”  we see more reaction over all the live coverage of surrogates praising Trump, with a little note in the middle of it all which states “(Psst, in many cases, the media ARE the ‘surrogates praising her.’)” 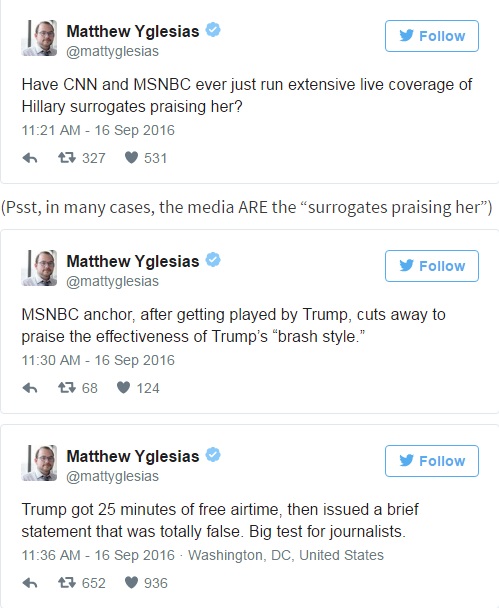 Related: CNN panelists left SEETHING when Trump abruptly ends birther issue once and for all

Last but not least, since we rarely get any amusement during a campaign season that seems to last forever and when many of us just wish the November election was over already, it is amusing to watch CNN reporters and panel basically melting down while admitting “We got played.”