The robo-machines and reflexive dip-buyers who took Fed governor Lael Brainard’s word for it on Monday got kicked in the teeth pretty hard on Tuesday. But then again, why would even a silicon-based trader take her word for anything?

Brainard is absolutely clueless about the manner in which the Fed and other central banks have booby-trapped the world’s financial markets with incendiary bubbles and FEDs (financial explosive devices).

After all, she has never set foot in any precinct of the capitalist economy since moving out of her dorm room at Wesleyan University in 1983. Instead, she’s been traveling the beltway apparatchik route every step of the way——including stints at the White House, Brookings and the US Treasury before her arrival at the Eccles Building.

That was surely reflected in the fatuous speech she gave Monday afternoon explaining the five “key features” of the  “New Normal” that are “the major reasons for caution” in raising rates off the zero bound.

Not surprisingly, the first of these was that “Inflation has been undershooting”, and presumably that means falling below the Fed’s vaunted 2.00% target.

Never mind that this proposition is not even true. The CPI less food and energy rose by 2.2% in July versus prior year. That ought to be close enough for government work—-unless Brainard thinks that oil and food prices will keep dropping forever.

Besides, the 2.00% inflation target is profoundly destructive to the living standards of low- and middle-income workers who must compete with the China Price on goods and the India Price on services.

By necessity, their wages must go up by much less than 2% per year—-or, better still, not at all. Otherwise these wages disappear completely as the entire job eventually gets off-shored. Indeed, as we showed yesterday, even Wall Street is massively off-shoring its back office, data processing and what it’s pleased to call “research” work.

As it happens, the Fed’s misguided inflation targeting policy results in a combination of both types of worker loss. That is, loss of jobs to the low wage regions of the world market and loss of purchasing power to domestic inflation.

By contrast, serious breadwinner job growth in the US can only be rekindled when the Fed abandons its 2% inflation targeting entirely, and allows nominal domestic prices, costs and wages to deflate toward levels that are more competitive with world markets.

The chart below, in fact, shows why inflation targeting is a counter-productive dead-end. The average nominal wage in the US has nearly tripled since Alan Greenspan launched the era of Bubble Finance in 1987. But based on an honest measure of main street inflation—-which we call the Flyover CPI—–the real purchasing power of these wages is currently lower than it was 29-year ago.

Needless to say, there would be a lot more good jobs in the US today if the CPI inflation rate had been zero or negative since 1987. Under the zero inflation scenario, for example, nominal wage growth purely in lockstep with productivity gains would have resulted in an average rate of just $12 per hour at present. But it’s real purchasing power would be 33% higher than three decades ago. In the same vein, Brainard pronounced that Wall Street is entitled to what will amount to 96 months of free carry trade money by the time of the December meeting for a second specious reason. To wit, “Labor Slack Has Been Greater than Anticipated”.

Let’s see. There are 210 million American of working age between 18 and 68, implying about 420 billion potential labor hours per year. That’s based on the idea that every adult is potentially capable of contributing 2000 hours per year to society’s need for work and production. However, according to the bean-counters at the BLS, only 240 billion labor hours were actually supplied to the US economy in the most recent year

In fact, the resulting total of 180 billion hours of unmonetized potential labor implies the actual “unemployment rate” is 43%. So, yes, we do have some slack!

As we showed in Trumped!, about 75 billion of those hours consist of unpaid household labor devoted to cooking, cleaning, shopping, homemaking etc. Another 40 billion is owing to the labor hours absorbed by nation’s prodigious $1.3 trillion student loan financing machine. Another 18 billion unemployed hours is due to the working age “disabled”, who may or may not have back pains and psychological stress disorders. And tens of billions more of potential labor hours is accounted for by drifters, grifters, shirkers, drug dealers, people between jobs, on sabbatical, seeking spiritual enlightenment and countless more.

Moreover, the reasons for these different forms of “labor slack” encompass the cultural values, transfer payment policies, family structure and child care availability among countless others. And that’s to say nothing of huge economic factors owing to the disruptive impact of world trade, the global labor cost curve, technological change, and gig and hours based work routines, too.

And then we get to the third reason for placating the casino gamblers and robo-machines. To wit, “The Neutral Rate (of interest) Is Likely To Remain Very Low For Some Time”.

Here’s the thing. The so-called “neutral rate of interest” is entirely a figment of central bankers’ imaginations. It’s purely self-referential econo-babble that is invisible to every real world borrower in the business and household and even government sectors. It hangs from an imaginary skyhook that central bankers deem to invariably be slightly lower than the actual pegged rates they have forced on the money and capital markets.

In sum, the Fed is apparently going to punt again owing to the fact that Flyover America is being punished with insufficient inflation; that there is slack in the labor market that it cannot measure and can’t impact anyway; and because interest rates at the zero bound a still below an invisible and non-existent natural rate of interest.

Yet here’s the very visible thing Brainard and her fellow money printers do not see at all. That is, stupendous bubbles and insensible speculation in every nook and cranny of the corporate finance market, among others.

This morning, for instance, a monster $66 billion takeover of Monsanto by Bayer hit the wires. It will be all cash, and the price is flat-out insane.

To wit, it amounts to 39X free cash flow for Monsanto’s seed and pesticide business that has flat-lined for the past 5 years, and is now heading into a thundering down-cycle in the global agricultural markets. 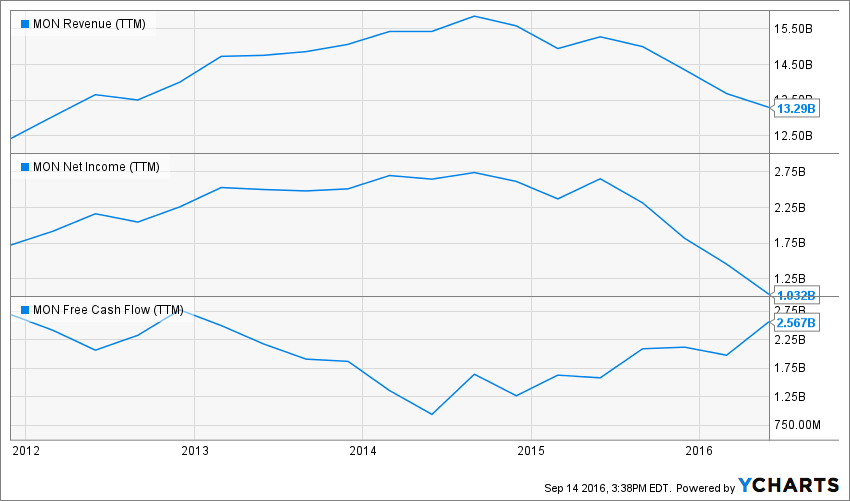 As to the outlook just ahead, here is the path of Monsanto’s top commodity crop. Just the time to by paying 39X.