The mainstream media is so desperate to distract the general public from the latest Hillary Clinton health crisis, and the fact that Democrats are actually thinking she may have to be replaced on the national ticket, that they are mimicking white nationalists in yet one of the most obvious examples showing that we are watching the death throes of the MSM.

What is bigger news than a presidential candidate, to whom many have noted prior strange behavior and countless examples of some type of serious health issues, swaying, knees buckling and passing out cold at the 9/11 memorial on Sunday?

To the MSM the bigger story is that Donald Trump Jr. promoted an Instagram post of a photoshopped image changing out the charaters of the movie “Expendables” with the head shots of Donald Trump and members of his family and allies,  and changing the word Expendables to “Deplorables” after Hillary Clinton attempted to claim that Trump supporters were a “basket of deplorables.” 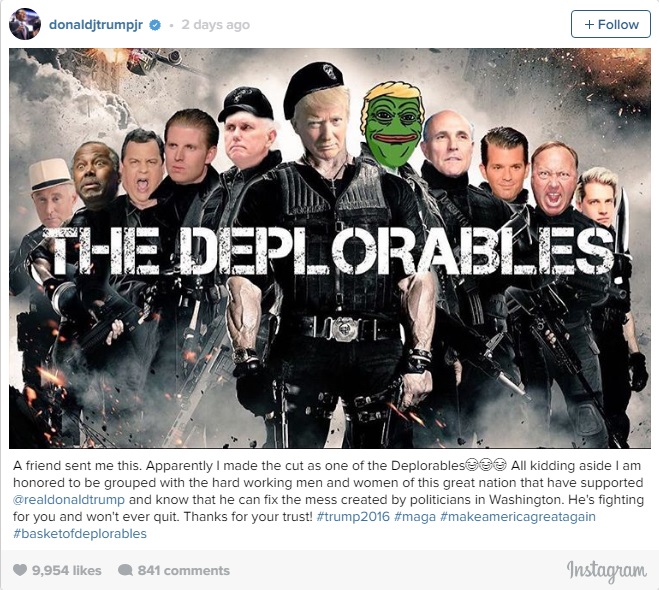 Why is the MSM breathlessly reporting on that image? Well, see, it is the frog, known as Pepe The Frog, which is seems that until it became associated with Donald Trump, was a very popular meme, with Tumblr naming it the #1 most “important” meme of 2015 and it also was listed as #6 of the “best of the Internet memes” for 2015.

Pepe has been around 10 years now, but this year, he truly overtook Kermit as the most famous anthropomorphic frog (no debate here). What started as a monster character in Matt Furie’s comic series Boy’s Club was a Reddit sensation in 2008 before people unearthed Pepe faces on 4chan – that other vault of all things great and ghastly on the internet.

From then on, Pepe the Frog variations like Sad Frog, Smug Frog, Angry Pepe and Well Meme’d have become a go-to for most of us.

According to the pathological liars in the MSM, now that iconic and highly popular, albeit crude, little frog meme is to be considered a “white nationalist image,” for no other reason that a group of white nationalists decided to start “an actual campaign to reclaim Pepe from normies,” with one of the group stating “We basically mixed Pepe in with Nazi propaganda, etc. We built that association.”

But he also embodied existential angst. Pepe, the grimiest but most versatile meme of all, was both hero and antihero—a symbol fit for all of life’s ups and downs and the full spectrum of human emotions, as they played out online.

On social media, Pepe became inescapable. Katy Perry tweeted a crying Pepe with the caption “Australian jet lag got me like,” racking up over 10,000 retweets. Nicki Minaj posted a twerking Pepe on Instagram with the caption “Me on Instagram for the next few weeks trying to get my followers back up,” which 282,000 users ‘liked.’

Turns out that was by design.

@JaredTSwift is an anonymous white nationalist who claims to be 19 years old and in school someplace on the West Coast. He told me there is “an actual campaign to reclaim Pepe from normies.”

What does it say about the state of the mainstream media that they are now allowing white supremacists groups to dictate their coverage, with the groups stating outright they “duped” people into associating a harmless little frog image that even celebrities used for fun with a white supremacists symbol?

Obviously the MSM has no problem being “dupes” and mimicking Nazi-loving white supremacists, just as they give Clinton a free pass on showing her disdain of tens of million Americans by calling them deplorable, or allowing her to define what “alt right” is or isn’t.

Unlike the MSM, ordinary hardworking Americans are not willing to let Hillary Clinton and her merry band of MSM puppets define them as they instantly starting pushing back by embracing the “deplorable” label, with Twitter user CubanSisters4Trump posting the following image with the statement “#BasketOfDeplorables It’s a compliment when a deplorable person calls us deplorable. Means we’re on the right side.” 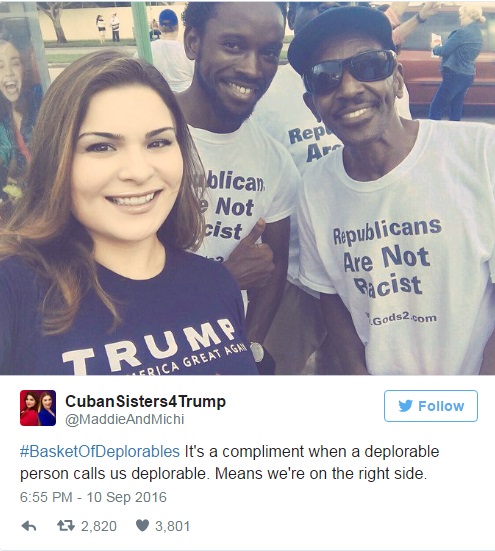 Others followed the same example as shown below: 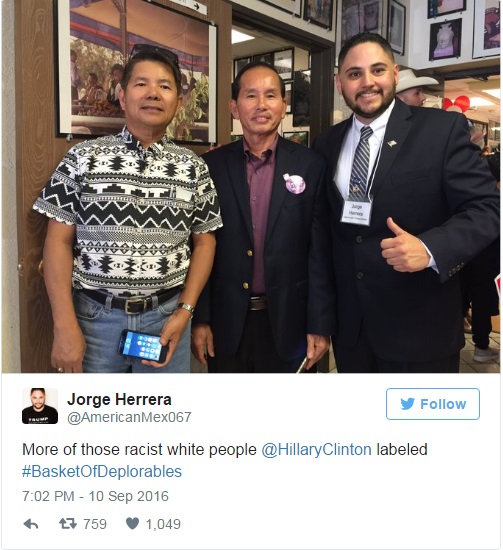 Then we have those condemning “deplorable” Hillary for advocating for infanticide: 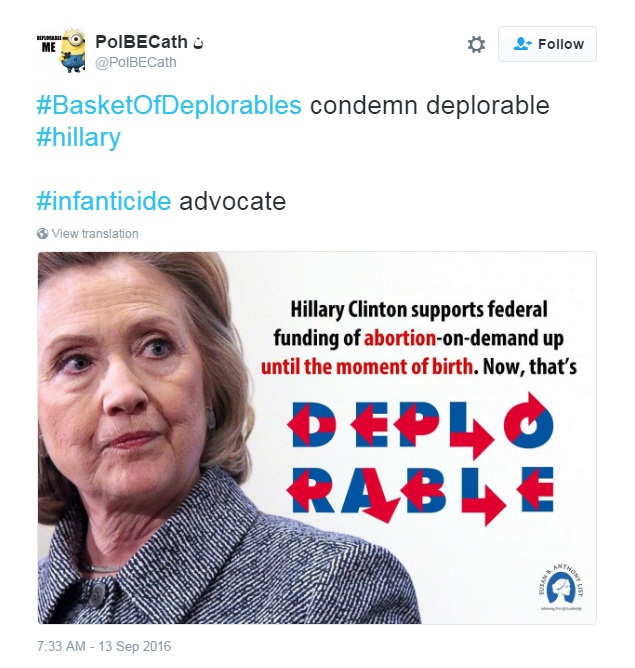 You can see more Americans refusing to allow themselves to be defined at the Twitter Hashtag #basketofdeplorables and more images for that hashtag here.

The MSM stinks of desperation as they attempt to associate Donald Trump with white nationalists, while at the same time allowing white nationalists to dictate their coverage of Pepe the Frog. While doing that they refuse to make same type of association when a Grand Dragon of the Ku Klux Klan endorses Hillary Clinton!

Neither candidate is responsible for who supports them or their reasons for supporting them, and while not a popular point to make, the voting booth truly doesn’t care either because a vote is a vote, period.

What ‘we the people,’ need to stand up against is allowing anyone to define us, and we must utterly refuse to allow ourselves to be “duped” as the MSM has by associating some Internet Frog meme with white supremacists groups simply because they want that association.

Video below titled “Media Loses Their Minds over Pepe the Frog! All from ONE day (9/12/16)”, with the description stating “An Instagram post by Donald Trump Jr. of an Expendables movie poster parody depicting Pepe the Frog among Trump allies had the media losing their collective minds today (9/12/16). Watch as they desperately try to connect Pepe the Frog with racism, white nationalism, and white supremacy. ” 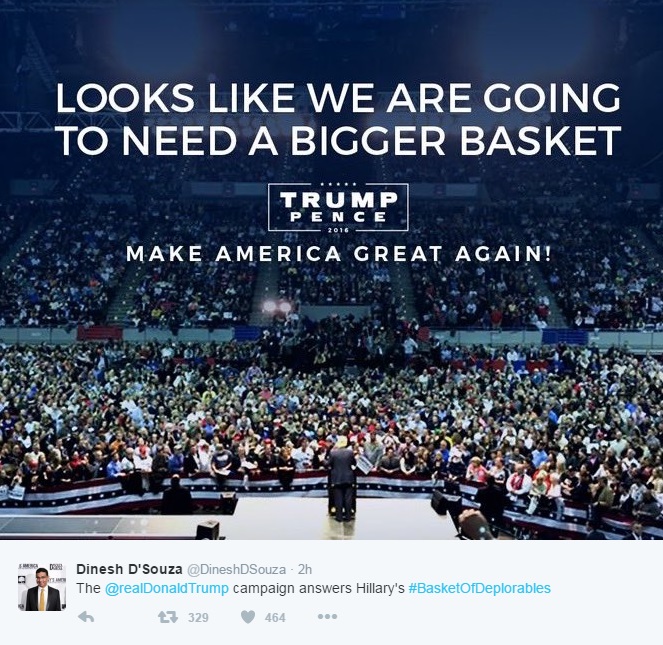