It was just two days ago that we wrote, “Gold Has Biggest One Day Rally Since Brexit as Elites Rush Into Gold”.

Now, to end the week, US stocks had their biggest drop since Brexit on Friday.

The media blamed concern over a potential 0.25% rate hike by the Federal Reserve at the upcoming September 20th-21st meeting.

Federal funds futures, which are used by traders to place bets on central bank policy, on Friday showed a 24% chance of a US interest-rate rise in September, compared with an 18% chance as of Thursday.

Eric Rosengren, President of the Federal Reserve Bank of Boston said Friday that “a reasonable case can be made” for raising interest rates to avoid overheating the economy.

Of course, no one asks, “how does an economy overheat”? An economy isn’t a cake. If an economy is “overheating” it would mean that trade is going well, profits are being made and capital accumulated. Why would one want to avoid “overheating” the economy?

Well, the US and other Western monetary systems are run by a communist-style central planning agency that deems it necessary to manipulate interest rates and counterfeit money in response to the perceived “overheating” or “cooling”.

It’s nonsense, of course. But in this communist-style system, ALL eyes and ears are focused on the politburo to see what our “wise leaders” have deemed is best for the rest of us plebs. And this is the case, yet again: The market has jitters that a rate hike of 0.25% could destroy the entire worldwide economy, monetary and financial system… a state of affairs that could never have happened without central planning.

Even more sadly hilarious, is the fact that anyone could deem a system with nearly 50 million people on food stamps and nearly ⅓ of the entire public jobless as “overheating”.

ARE WE IN FOR A MASSIVE CRASH THIS JUBILEE YEAR?

The Jubilee Year ends on October 2nd. And based on our ongoing analysis, we said that 2016 would be highly volatile, and that all the building blocks – economic, military and political – would be put into place to advance global government significantly.

We were right straight off the bat when January was the worst opening month for worldwide stock markets in history. Then, in June, with Brexit, we saw the continued fracturing of the EU (which we were the first to predict last year: “Eurozone Collapses, Borders Erected on Shemitah End Day”).

And the day after Brexit came the worst one-day worldwide stock market drop in history. Exactly 7 years, 7 months, 7 weeks and 7 days since the Shemitah end-day crash in 2008.

We’ve profited massively from our analysis, with the TDV newsletter’s Premium portfolio up 200% from a year ago.

Our positions in gold & silver have done very well since the very first day of 2016. 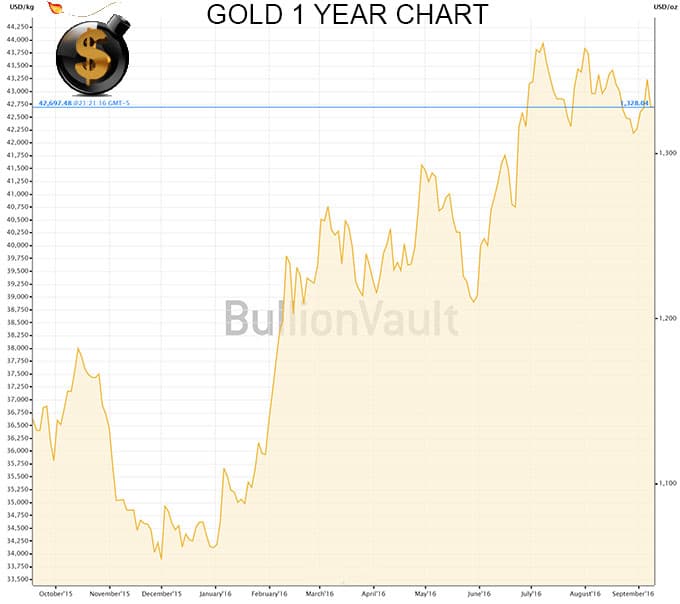 Since the beginning of the year, gold has risen 24.9% and silver has skyrocketed 37.1%.

And bitcoin has also risen nearly 9% since the start of September.

But the question is, will we see another massive crash by October 2nd, or soon after?

There is no way to know for sure, of course. But I’ve said for months now that I expect September/October to be a very volatile and dangerous time in the markets. We’ll find out early next week if this drop on Friday carries through.

Many of our subscribers have profited mightily this year from volatility, amidst political and military disruptions. Unfortunately, that’s not the case for most, who continue to live in fear, anticipating days like today.  Here is just one subscriber’s comments (from our “private subscriber’s only” Facebook group) on his gains from today alone.

To join our group of worldwide “vigilantes,” many of whom are happy to help you with any questions you may have, click here.

Most people are worried sick this weekend after Friday’s market action.  But here at TDV we are all looking forward to Monday to see if the markets continue to drop in free fall.

Even if it doesn’t, we are positioned to profit from the volatility which we expect to continue throughout this fall.  The months ahead will not be boring!