The recent FBI release of heavily redacted investigation documents detailing their notes on their interview with Hillary Clinton which was held just days before the announcement that they would not be recommending criminal charges against the Democratic nominee for president, definitely did some damage as polling is already showing the race narrowing between Clinton and Republican presidential candidate Donald Trump, but it was the Wikileaks bombshell release the weekend before the Democratic convention that really shook up the DNC and the Clinton campaign, causing the resignation of at least four DNC staffers including the Chairwoman Debbie Wasserman Schultz.

Now….. Wikileaks founder Julian Assange just announced that his organization are readying multiple batches of leaked data, planning to reveal “teasers” to the public as early as next week or the following week.

Assange dropped this bombsehll in a discussion with Fox News’ Sean Hannity, after Hannity asked how soon they would be releasing their information, “The first batch is reasonably soon, we’re quite confident about it now, we might put out some teasers – I don’t want to promise anything because you have to see how the formatting goes – but we might put out some teasers as early as the next week or the week after.”

What kind of “teasers” can the public expect? Well we get some hints from other statements Assange made on Hannity as well as what they are already indicating on their Twitter account, such as when he tells Hannity below that Clinton is “lying” about not realizing that the (C) on the emails meant they were “classified,” therefore posed a security risk by having them on her private server.

This fact that Assange is bringing these specific emails up now, as the screen shot above shows him holding a sample up, indicates that he and Wikileaks most likely has more and they deliberately waited for those FBI investigation documents to be released in order to prove that Hillary once again lied when she claimed she didn’t understand what the ‘c’ mean, stating she thought ‘c’ was for “alphabetical paragraphs.” 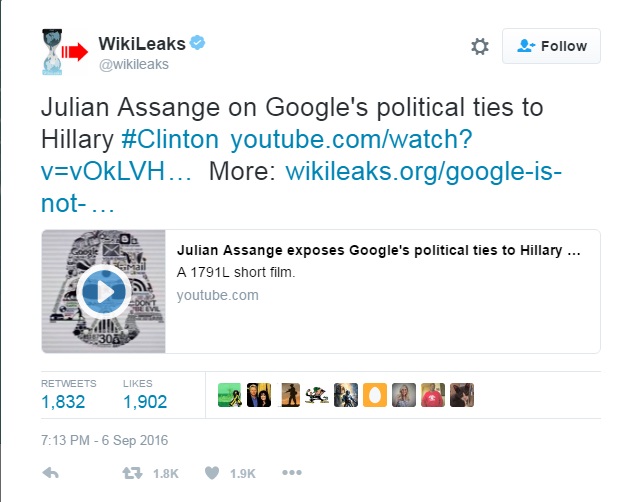 The timing of the next Wikileaks Tweet also raises some eybrows as on September 6, 2016 at 7:13 pm, they tweeted a short film (3:37 minutes) first published on July 28, 2016 , of Assange exposing Google’s political ties with Hillary Clinton. Since recent reports claim that Google has been actively censoring Clinton search results, in her favor, this could potentially be one of those teasers of what could be contained in one of the upcoming “batches” of email releases.

Given the timing of the July 22, 2016 release  of part one of the “Hillary Leaks series,” by Wikileaks, right before the Democratic convention, that led not only to the high profile humilation and resignation of DNC chair Wasserman-Schultz, and multiple other staffers, including Brad Marshall, chief financial officer, who was directly quoted in those leaked emails for “suggesting that Sanders could be hurt in Kentucky and West Virginia if his faith were questioned and he was painted as an atheist,” we can only assume that each of the upcoming “teasers” and releases will be timed to do the most political damage to Hillary Clinton at critical points before the November presidential election. 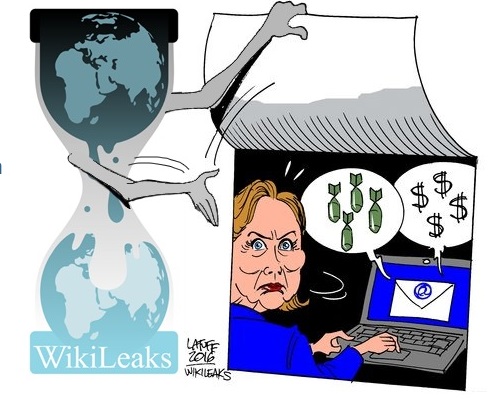