Why Are UN Troops On American Soil?

TDC Note – Are they still moving about? Does anyone have an update to this information? Recent sightings? This is from the end of June 2016, approximately 75 days ago. If anyone sees this type of movement or large scale military movement please use the contact button at the very bottom of every page and send us photos/videos or any information that can be confirmed.

Over the past couple of days, the Internet has been abuzz with reports and photos of UN military vehicles on US soil. Many people are looking at this as a shocking development. The following has been reported as if this were some novel and recent event:

The white trucks, equipped with large off-road tires, were seen being transported on Interstate 81 on Friday. They appear to be Alpine Armoring’s Pit-Bull VX SWAT Truck models.

Jeff Stern posted photos of the vehicles on Facebook, writing: ‘Can’t begin to tell you how many of these I passed today on 81 near Lexington VA. Interesting times ahead!” 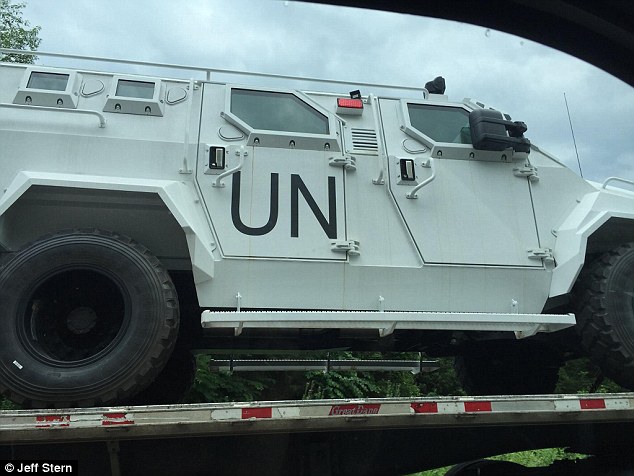 “Fernando Johnson questioned online: ‘Tactical Vehicles, with bullet proof glass? Whatever could those be for, and why are UN vehicles here, in THIS country?!”

As alarming as this appears to be, it is just part of an ongoing operation of the pre-positioning of foreign assets on American soil.

I am of the opinion that we should remain vigilant and report such happenings on American soil. However, to those that think that is a novel phenomena and you think you are sounding the alarm for the first part, you are sadly uniformed. In fact, many of us in the Independent Media have been sounding this alarm for years. Foreign troops being positioned on American soil, most likely under the UN flag, have been reported for years. This is called the pre-positioning of assets.

2012 Reports from Tennessee and Kentucky

Sherrie Wilcox of Knoxville,TN. Sherrie has seen and photographed DHS armored vehicles back in March 0f 2012 with Russian soldiers manning the vehicles in eastern Tennessee and Western Kentucky. The following video details how Russians are training in DHS vehicles. I first posted this in 2012 and make no mistake about it, the Russians and the Chinese will help comprise the UN “Peacekeeping” force on our soil.

I have reports from hundreds of citizens from around the country who have sighted Russian soldiers in places as innocuous as at a Walmart in Houston and Russian troops training with American soldiers in the Victorville, CA. area.

Any military intelligence officer will tell you that even the smallest thing could mark the coming of a major event. There is a video going viral that should concern every American who hopes to retain any remnant of the Constitution, including the hope of legally retaining ownership over a gun. Ultimately, the presence of UN personnel in the manner in which we see in the following video, should be disturbing to even the most unaware American.

Why is this UN Multinational Force Observer in Pennsylvania getting gas? For what possible reason would the UN be operating inside the United States? I have been sent this video a half a dozen times in the past 24 hours. Many Americans see this for exactly what it is.

Take a look at this video as a very aware and alert citizen confronts and United Nations Multinational Force Observer.

I took this sighting of the UN Multinational Force Observer in Pennsylvania to my best sources. They were of the presence of this organization operating within the United States. They told me that this UN personnel are here to “observe” during an United Nations “Police Action” on American soil. The purpose will be solely to impose undeclared martial law and to confiscate American guns.

I have reported, for years, that foreign troops were operating on US soil. Now, we are getting operational specifics.

Foreign occupation forces are training and will be training to overrun this country in a martial law scenario. Why foreign troops? Because American troops might not be able to be counted upon to carry out the orders of subjugation that will come down from this globalist inspired banker-hijacked administration

This past October (2015) over 36,000 troops from more than 30 countries participated what NATO calls its largest exercise in over a decade and the exercise is called “TRIDENT JUNCTURE”.

Trident Juncture came in under the cover of darkness and was obscured by Jade Helm 15. The following video emerged last summer.

Why Is This Becoming a Common Sight On US Soil?

The United Nations has no business being in rural Pennsylvania or downtown Dallas. We are not under martial law. We have not suffered an invasion or a civil war. Or, are we about to experience one or more of these things. Is the the chest pain before the heart attack?

One would think, give the present hysteria, that the above photo is from Interstate 81 in Virginia and the photo is only a few days old. Actually, this was taken in 2014 in Georgia.

Wake up America, we have been in the process of being occupied for a long time and these foreign troops are merely awaiting the catalyst event to be brought into action.

The following paragraphs are devoted to explaining what is happening on our soil and where this is headed. And one caveat, it is appearing more likely that we will not have to wait long for the conclusion to this drama to be written.

An Economic Collapse Will Likely Be the Catalyst

This summer, thanks to the reckless Obama administration, our national deficit will approach $22 trillion. Our credit swap derivatives debt is a staggering $1.5 quadrillion. Our social security/Medicade debt, often called unfunded mandated liabilities is $240 trillion. Plus, the world is running from the Petrodollar, which is the only backing our dollar enjoys.

In short, economic Armageddon could happen any day. You could wake up tomorrow and the banks have seized your life savings. When I say any day, I mean any day.

An economic collapse of epic proportions will likely be the catalyst for major social unrest. This is when we will learn of the purpose of foreign troops and UN vehicles on our soil. And not surprisingly, your government is preparing for this event as we speak.

What Kind of Conflict Is Coming?

Ask yourself, can the average American engage DHS and its foreign allies on American soil? Not in the open, they can’t. Any prolonged conflict on American soil will take the form of a guerrilla conflict.

The establishment knows what form the coming conflict will take, following an economic collapse, and they are practicing for it as we speak. 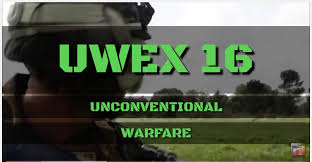 Isn’t it time to start paying attention to UWEX?

Jade Helm 15 practiced for the internment of American dissidents. Below is a photo of a 2015 exercise in Ft. Lauderdale in which crisis actors pretended to be rounded up because they were deemed to be dissidents. 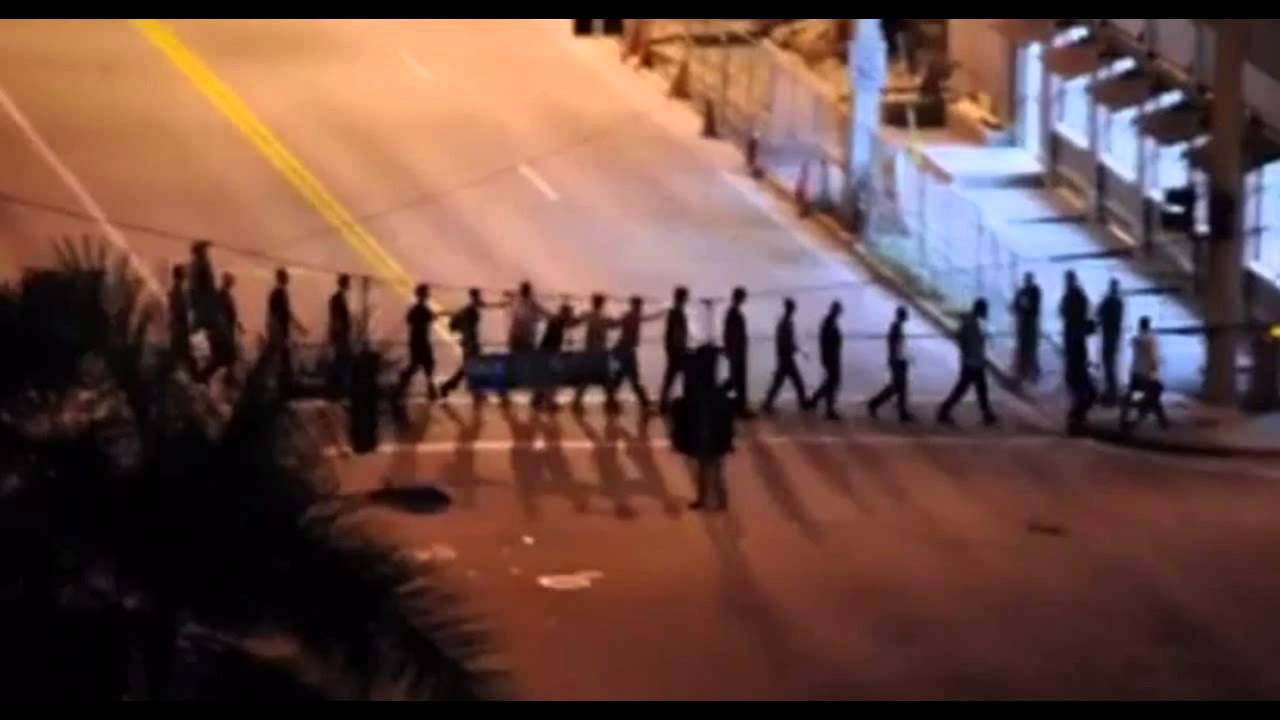 I have written about UWEX 16 since 2015. It is essentially, Jade Helm 16. In this drill, presently taking place in Texas, the establishment is rehearsing fighting against guerrilla forces comprised of former US troops.

According to reports UWEX 16 will be even more covert than Jade Helm 15. People like Gary Franchi and myself have learned that Jade Helm 16 forces will be operating on privately owned properties in the county, and at Camp Swift. Unconfirmed reports are circulating that the US government made cash payments to the owners of the land which allow them to train on private property. The rumors are hard not to believe because I reported last Spring that each county who participated in Jade 15 was paid a nuisance fee of $150,000.

The Government Also Leaves a Trail of Truth Regarding UWEX 16

Without much searching, I found the following document in which a private government defense contractor is actively seeking actors to fill their needs for the upcoming drill with regard to UWEX 16. This can be nothing else but a rehearsal for the establishment as they prepare to fight against American military units, gone guerrilla, because these fine soldiers will not forsake their constitutional oath.

UN troops are on American soil to seize guns and incarcerate American dissidents in the midst of the coming chaos brought on by an economic collapse.

The next time you see, or read about UN vehicles on American soil, please don’t act surprised. You have been warned and the time is near when all will be revealed.