I first started writing this story two days ago, but wanted to dig deeply into the technology before I went with it.

This started out on Friday when a blog called “The Ferocious Conservative Activist Bulletin, apparently written by a John Gaultier, printed a warning to Donald Trump that Hillary Clinton may wear a secret transceiver device hidden in her ear during the debates to prompt her with advice.
An in-the-ear transceiver is a device that allows the wearer to receive prompts from off stage, and even to talk back to the prompter in the lowest whisper.

The Gaultier article also claimed that President Obama wore one during the 2012 debates.

Gaultier shows a number of pictures of Hillary Clinton inserting wired earbuds into her ears . These photos are irrelevant to this discussion. He also shows pictures of President Obama – some of which could easily be photoshopped fakes – but two of them clearly show the President with his left hand up to his left ear as though he is adjusting the volume of an earpiece.

Here is the article that Bill Still references in the video

SHE WILL HAVE HER EARS COVERED BY HER HAIR SO NO ONE WILL SEE IT!

She has used them in the past.. see pictures below.. she is not picking her ear!! 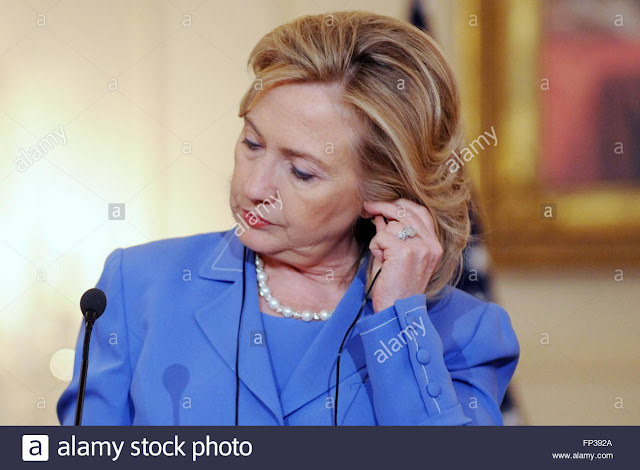 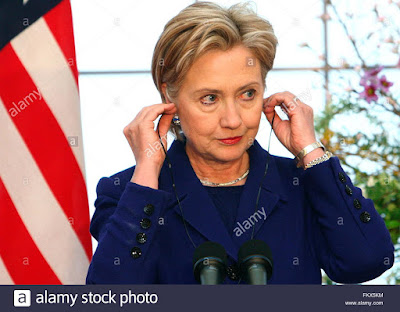 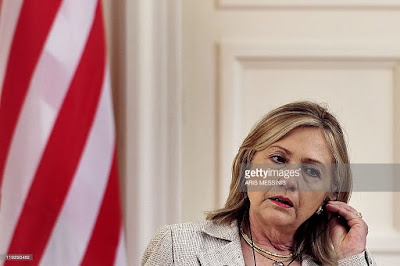 The Trump Campaign should use a scrambling device that send distorted signals into her ear sending Hillary Clinton into an epileptic fit on stage. WONT THAT BE SOME FUNNY SHIT!! 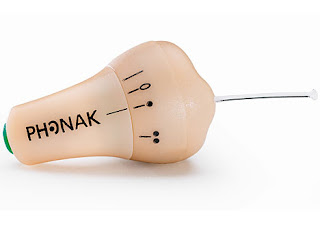 ITS NOT SECRET THAT THIS TECHNOLOGY IS AVAILABLE!!
Teenagers may be using James Bond-style hidden earpieces to cheat in their exams, according to the Government’s testing watchdog.
The Qualifications and Curriculum Authority is investigating concerns that students could be using the devices linked to mobile phones or MP3 players.
A Canadian company is openly promoting the invisible, wireless “micro spy earphone” to exam candidates around the world, The Times Educational Supplement reported.
The Toronto-based company, Examear, uses the advertising slogan: “Helping students succeed. Worldwide!”
Read more: http://www.dailymail.co.uk/news/article-475995/Invisible-earpieces-help-student-cheat-exams.html#ixzz4Hp883SuH

It’s not a secret that Obama uses ear pieces, because there are numerous photos that show him wearing one at various functions, as you see in the photos below:

Obama adjusts ear piece in photos above
“Gate” posted this close-up photo of Obama (see below) which clearly shows him wearing a clear-colored ear device (a Bluetooth® or  higher-end Kleer® wireless earbud?). However, this photo could not be from the third (or second or first) debate because Obama has jet-black hair in the photo, whereas his hair has grey in it during the three debates:

So I took screen shots from the videos posted on YouTube of the third and first debates, so we can see for ourselves.
Here’s a screen shot from the first debate, followed by a close-up of Obama’s left ear from this screen shot:

Here’s a screen shot I took from a video of the third presidential debate, followed by a closeup of Obama’s left ear from that screen shot:

I painted two red arrows onto the above closeup, pointing to two features that are missing from Obama’s left ear in the first debate:

I found the same two features in other screenshots of Obama which I took from the video of the third debate.
Here are the closeups of the two ears (left from the 1st debate; right from the 3rd debate) placed side by side so you can better compare them. I’ve painted red dots on that strange flesh-colored vertical line in the picture of his ear from the 3rd debate:

Here are the first pic posted by “Gate” showing clearly a clear-colored ear device in Obama ear (left), side by side with the closeup of his ear from the third debate (right). Do you see how the pink crescent shape is EXACTLY the same U shape as the clear ear device?

Now watch this video of the third presidential debate. Notice, for example beginning at the 0:02:40 mark, how when Romney’s talking, Obama is very still and just stares at Romney, as if he’s intently listening to someone talking into his ear:

This is what Mark McGrew wrote in an email to me:
“I’m sure there are clear ear pieces. But in a clandestine application they would be flesh colored and used with makeup to blend in which is what Obama’s ear looked like in the 3rd debate.
Blue Phone: This is a technique used by sales managers to train new salespeople, who know little about sales methods or their written script (sales pitch). A manager listens in to a call between a salesman and his customer. The customer can not hear the manager. The call is recorded so that the salesman can listen to it later, over and over again, until he understands what to do when he is on his own. The salesman’s only purpose in life, is to watch and listen to every word and every inflection of the manager and the salesman has to duplicate, like an actor, every thing the manager says, in the same tone of voice, the same inflections and the same body motions. The salesman becomes like a Disneyland robot, completely mimicking the manager in every way. In reality, the manger is negotiating with the customer, but using the salesman’s body to do so. The salesman is ‘possessed’. If done properly, the manager at some point can say, ‘I shot John Kennedy and raped your daughter’ and that is exactly what the salesman will tell the customer, and not even know he said it. After the call, the manager can tell the salesman what he said, but the salesman will not believe it until he hears the recording of the call. The salesman is hypnotized during the blue phoning. The manager has complete control over his robot. This technique is used in complicated sales, with many questions coming from the customer, such as securities and investments. If the manager stops the blue phone and walks off, the salesman will not have the faintest idea where he is in the sales call and will take several seconds to ‘come out of trance’ and try desperately to get back in the sales call, usually failing to do so. It is like you dropped a salesman off a 30 story building and he doesn’t realize it until just before he hits the sidewalk.
I personally have blue phoned hundreds of sales calls and know exactly what a blue phoned person looks like: As if in an intense trance. And they are in an intense trance. I am an expert in Blue Phoning and I know what a Blue Phoned person looks like, the expression on his face, the eyeball movements, the stress level, the body movements…..everything.
In debate #2 and debate # 3, Obama was Blue Phoned. Whether it was an ear piece, a teleprompter or a brain implant, I do not know. I only know that he was Blue Phoned.”