Louisiana: What They Don’t Want You To Know Or See

What is happening in Louisiana right now is being called “The worst natural disaster in US since Hurricane “Sandy”,” with others saying it it is the worst to hit the U.S. since Katrina, but either way, the bottom line is it is bad.

The Hill reports that at least 13 people are dead, more than 85,000 people have applied for federal disaster aid, 30,000 people needed to be rescued and 40,000 displaced. State officials report it is easily the biggest housing crunch since Sandy. In Livingston Parish, officials report as many as 75 percent of the 52,000 homes there had been damaged by floodwaters. In Ascension Parish, water had seeped into one of every three homes.

“We’ve been through Hurricane Gustav, Katrina, Isaac and Rita, but this without a doubt is the roughest we’ve ever had in this parish,” said Livingston Parish Sheriff Jason Ard.

The reason I specifically am highlighting The Hill report is because we often take the mainstream media to task for their biased reporting, their attempts to influence readers and only “inform” them of what they MSM wants them to see or hear, but in this article from The Hill, written by Joe Concha, the writer absolutely shreds his own colleagues for the bias we constantly highlight.

If ever there was a contrast to make around “then-and-now” media coverage of a Republican and Democratic president put in similar situations and their respective reactions to it, this one definitely makes the Top 5.

2005: President George W. Bush’s presidency is basically declared over after he waits two days to cut a vacation short to return to the White House to directly engage in relief strategy around hurricane-ravaged Katrina. On Day 3, he would visit the Gulf Coast to survey the damage.

The headlines at the time and since have included, A compassionate Bush was absent right after Katrina, The 7 worst moments of George W. Bush’s presidency, Kanye West Rips Bush at Telethon, What If They Were White?, Jesse Jackson lashes out at Bush over Katrina response, Katrina thrusts race and poverty onto national stage: Bush and Congress under pressure to act and An Imperfect Storm – How race shaped Bush’s response to Katrina.

Concha then fast forwards to 2016, stating “President Obama continues his vacation that includes fundraising events for Democratic nominee Hillary Clinton and the relative silence is deafening.”

2005: A Republican president takes three days to survey a natural disaster in Louisiana and Mississippi after cutting a vacation short.

The media at the time declares that was way too long, far too insensitive, even pushes a narrative that labels him racist.

2016: A Democratic president will not only cut a vacation short in any capacity to survey a natural disaster in Louisiana — the worst of any kind to hit the country in four years — but hasn’t even made any public statements on it. Not one.

The media of 2016 now yawns. Basically indicates its no big deal and if there is actual criticism, it doesn’t lead a cable news hour or go anywhere near a front page.

Kudos to Concha for the courage to take his own brethren to task for their obvious bias and partisanship.

Breitbart is now reporting that after being shamed by Donald Trump cancelling an event in order to visit Louisiana, while Hillary “calls her concern in,” Obama now announces that he will be visiting Louisiana.

As to Trump’s visit, the MSM breathlessly highlights the negative with reports that the Democratic governor warns Trump about coming to Louisisana for a “photo op,” and that Trump spent a “minute” handing out Play-Doh, then leaves, but what they don’t want you to know or see is the 18-wheeler filled with supplies for disaster victims that Trump donated.

Was Trump’s visit a “photo-op?” Doesn’t seem to matter to flood victims screaming “We knew you’d be here.”

It also doesn’t seem to matter to those that were lamenting that Obama and the media were ignoring the scope of the devastation and the plight of the flood victims: 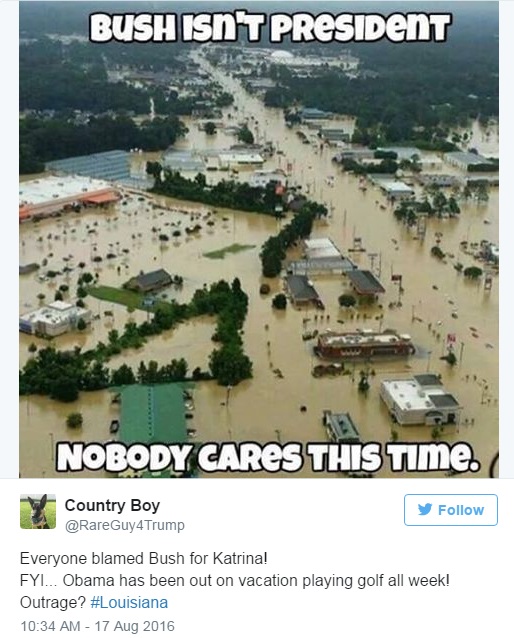 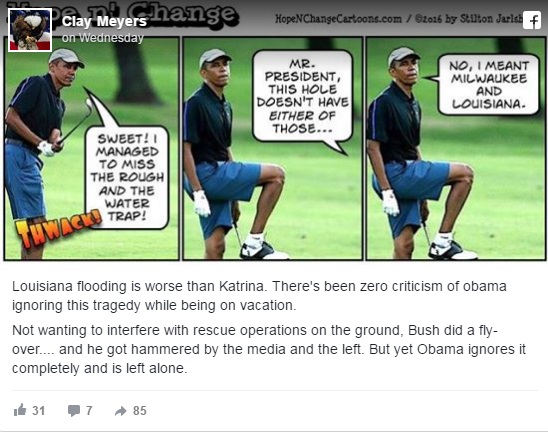 Do any of the Louisiana flood victims that are receiving those supplies that Trump donated out of his own pocket care if it was a “photo-op,” or those that see that Trump’s visit garnered more news coverage for Louisiana in just one day than they have received since the beginning of the disaster?

There is no doubt that as President, Obama is providing aid and resources to Louisiana behind the scenes, but what these behind the scenes actions do not do is highlight the need of the flood victims, force the media to pay attention and perhaps encourage others to help in any way they can.

Hillary Clinton claimed she wasn’t visiting the disater area because it would be a “distraction,” rather than seeing, as Trump did, that rather than distract, it spotlights, brings attention to those that are left without anything. Clinton also calls for donations for the flood victims…. but what has she donated? Did she show up with media in tow to bring attention to Louisiana? Did she donate supplies, an 18-wheeler full of them?

No. Hillary is too busy planning two fundraisers for this weekend:

The Democratic presidential nominee will attend a “Summer Celebration with Hillary” at Pilgrim Monument in Provincetown tomorrow afternoon, according to her campaign schedule. The event, which is slated to run from 1 to 3 p.m., will feature an appearance from world-famous actress, singer and pop icon, Cher. Tickets for the celebration run from $500 to $27,000, according to Clinton’s campaign website.

In addition to the “Summer Celebration,” Clinton is also expected to appear at a private, two-hour fundraiser at the home of former U.S. ambassador to Portugal Elizabeth Frawley Bagley in Nantucket today, according to The Inquirer and Mirror. Tickets for the Nantucket fundraiser reportedly start at $1,000 and run as high as $27,000.

Hillary is too busy planning Bill Clinton’s birthday bash in Martha’s Vineyard, to which Barack Obama is apparently going to attend before heading to Louisiana.

The next video is something Obama and Hillary Clinton definitely do not want people to know about or see.

Note at the 13:25 minute mark in the video below, a group of men explain, on camera for Trump and all of America to see, the scope of the disaster for parishes that historically have never had to deal with flooding of this type, they explain what is needed, how Americans can help and at one part the man standing next to Trump states “You actually come in here when our president is too busy.”  The second the man says that, observers actually start clapping.