Gold’s Most Important Month of this Year

September may very well be the most important month of the year for gold.

I’ve explained before that Japan doesn’t have a sustainable choice. I also explained it would be forced into a stimulus program to appease the citizenry and diversify its approach towards its stated goal of 2% inflation.

The government late on Tuesday detailed a package of financial measures that it said was worth ¥28 trillion ($US277 billion), equal to more than five percent of Japan’s gross domestic product.

The move followed a disappointing stimulus package announced last week which included only a slight rise to its monetary stimulus in the form of an increase in purchases of exchange-traded funds (ETF) and maintained the pace of purchases for Japanese bonds.

The response? The yen hit a three-week high against the dollar. In less than a week, 10-year Japanese government bond yields have surged higher. Last Wednesday, they stood at -0.29%; on Tuesday, they closed at -0.07%, having come close to zero.

The opposite of the desired effect.

The Financial Times explained it best:

In normal market conditions, a move of this nature would simply equate to a small potential capital loss for the investor. As the income from such bonds is fixed at issue, rising yields in the market make an individual bond less valuable.

But what about in the strange world of negative interest rates? Someone who bought ¥100m of ten-year JGBs last Thursday morning now holds securities worth ¥97.5m, a drop in capital value equivalent to about NINE years (emphasis mine) of losses for a bond yielding minus 0.29 per cent.

These types of distortions cannot last.

Results of that review are expected in the next policy meeting in September, which will coincide with a September meeting here in the U.S. that could surprise with a rate hike.

The Bank of Japan (BoJ) owns more than a third of outstanding debt, the most of any investor class, and volatility has surged this year to the highest level since 1999.

Why does this matter? For two reasons.

Japan is running out of bonds to buy at exactly the time where it needs to drastically ramp up the amount of assets and bonds it’s buying.

If the BoJ can no longer buy enough bonds in order to stimulate the economy and achieve the 2% inflation target, what can it buy?

Goldman Sachs provided a chart of the various assets that the BoJ could tap into. The challenge with each and every one of those assets are thin markets that can’t provide the liquidity needed or, in the case of ETFs, there is a day of reckoning when the ETF is sold back into the market that would likely cause a stock panic. 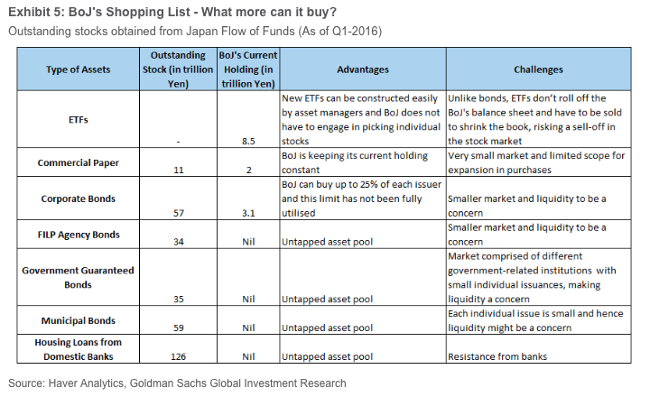 Why does this matter to those of us in the resource and specifically the precious metals space?

Which will inspire real money to go looking for something to buy.

Bill Gross, known as the bond king, says he favors gold and real assets over stocks, bonds, and private equity.

“I don’t like bonds; I don’t like most stocks; I don’t like private equity,” Gross, who runs the US$1.5 billion Janus Global Unconstrained Bond Fund, wrote in his monthly investment outlook Wednesday. “Real assets such as land, gold and tangible plant and equipment at a discount are favored asset categories.”

Loews Corp., the holding company run by New York’s Tisch family, was able to counter low bond yields and stock market volatility in the first half of this year with gold-related investments that doubled in value.

Jeff Gundlach, the chief executive of Los Angeles-based DoubleLine Capital, which oversees more than $100 billion, reiterated that gold and gold miners are the best alternatives to Treasuries and predicted gold prices will reach $1,400.

I saw the movie “The Big Short” again yesterday. The basic premise is there were several investors that recognized and invested in the subprime mortgage crises.

Everybody that recognized the trend made a lot of money. In the meantime those that didn’t were displaced, lost homes, jobs and… well you know how it ends. The average taxpayer footed the bill. But I digress.

My point is there is a lot of money to be made from the powerful trend that is developing. You don’t have to have a billion dollars or a million dollars or even one hundred thousand dollars to profit.

You just have to recognize the trend developing and participate at a level that is comfortable for you.

Resource Stock Digest Premium is off to a great start, but it is still in the very early stages.

Every single stock in the portfolio is an excellent way to participate in the upside ahead and I’ll have a new pick, maybe two, for you next week.