Hold Your Hands Out Helicopter Money Is Here

Bernanke met with Bank of Japan Gov. Haruhiko Kuroda about the plight of the country’s economy and its currency.

Japan’s economy has been weak for a very long time. But slowing global growth and the looming “Brexit” have raised even more alarms than usual. A major exporter, Japan relies more than most on external growth. It also needs a weak currency to compete with the likes of China, South Korea, and other Asian exporters. Unfortunately for Japan, the yen has been stengthened by the global retreat from euros and British pound sterling.

A weaker economy AND a stronger yen simply won’t do.

Helicopter money is when the central bank gives money directly to the government, either through a handout, or by buying bonds. The government then uses that money to finance fiscal stimulus, like tax cuts, rebates, and infrastructure spending.

In Japan’s case, the government is reportedly pursuing a 20 trillion yen ($190 billion) stimulus, equal to 4% of GDP. That fiscal stimulus would be accompanied by an identical 20 trillion yen of government bond purchases by the BOJ.

It’s a bold new step among central banks, which have been employing unconventional monetary warfare (quantitative easing, negative interest rates, etc.) ever since the financial crisis struck in 2008.

Of course, it isn’t entirely new. The Federal Reserve has already deployed what might be called a “stealth” helicopter money drop.

You see, the Fed is required by law to remit to the Treasury Departmentany excess funds left after covering for its expenses. Such payments date back to 1917, but only recently have they gotten so large.

Divided among America’s 125 million households, that’s the equivalent of each U.S. household receiving about $1,000 from the government and 2% tax relief for households falling in the $50,000 median-income bracket, according to Torsten Slok, Deutsche Bank’s chief international economist. 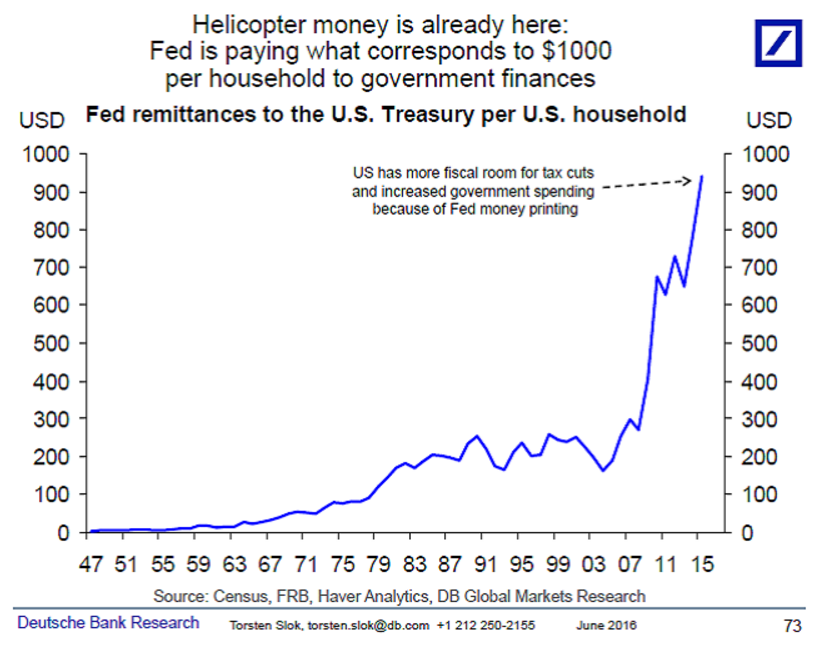 And guess what? More is on its way.

Caught In the Middle

Congress is going to pass another huge stimulus bill next year.

First, let me tell you why.

As you know, U.S. growth is still weak. It looks strong only in comparison to other countries that are in more dire straits.

But those countries are all scrambling to boost growth. We just talked about what’s going on in Japan. And that’s hardly an outlier.

Central banks in Europe have already deployed negative interest rates. Great Britain is eyeing up a huge new stimulus package to ease its transition from the EU. And China continues to rely on government spending to prop up its massive economy.

This is just the world we live in now. Except the United States has fallen behind. In fact, it’s been moving in the opposite direction, raising interest rates while others are slashing them.

We’re now in a situation where growth is slowing and rival monetary policy is increasingly adversarial.

The Fed has been caught halfway out in the street. It can’t keep ratcheting rates higher with the rest of the world going in the opposite direction — not without damaging growth anyway. But it also can’t reverse course, cutting rates just a year after raising them. (Even if it could, the boost from lower rates has been just about exhausted.)

So we’re more likely to see a different policy approach instead — one in which the Fed buys bonds directly, or at the very least continues to operate in stealth mode passing excess currency over to the Treasury, and the government picks up the slack.

That’s what brings me to the next big stimulus package.

You may have heard that we’re in an election year — an important one too.

Any administration that comes in is going to be face-to-face with weak economic growth at best, and a tanking economy at worst. There’s no sunny scenario where U.S. growth magically returns to pre-crisis highs over the next four years.

Furthermore, whoever wins in November is going to want to put their own stamp on the economy, and buttress employment — lest they end up a one-term wonder.

The Next Big Stimulus

You might think that’s unlikely given Congress’ track record for inaction, and that’s totally reasonable. However, the idea of a huge new stimulus bill actually emerging from Congress isn’t really as far-fetched as one might think.

When it comes down to it, the November election can only end one of two ways:

1) Donald Trump proves as toxic as the Politerati says, and loses by a wide margin. In this scenario, the Senate goes back to the Democrats and the Republicans are forced to moderate.

2) Donald Trump surprises the establishment (again), wins the presidency, and the Republicans walk away with both Congress and the White House.

In the former case, the Democrats will immediately push for a massive stimulus package modeled after the 2009 Recovery and Reinvestment Act.

That bill, passed after Democrats swept the 2008 election, dumped some $787 billion on infrastructure development, education, health, energy, and federal tax incentives, while simultaneously expanding unemployment benefits and other social welfare provisions. Its effects have just about worn off by now.

This next stimulus bill would likely be smaller, but the overall structure would be the same.

Now let’s look at case No. 2, in which Donald Trump wins.

In that case, we’re likely to see a stimulus similar to the Economic Stimulus Act of 2008, passed by the Bush administration on its way out of town. That bill provided for tax rebates to low- and middle-income taxpayers, and tax incentives for businesses.

The total cost of that bill, which passed with bipartisan support, was $152 billion. A new version would almost certainly be much bigger, since again, Republicans would have full control over the House, Senate, and White House.

In any case, we’ll be in a situation where the Fed is printing money and passing it on to the Treasury — either directly or through backdoor channels — and Congress is funneling it into a stimulus program.

How do I know? Because it’s already been happening for eight years now.

Helicopter money. It’s here, and there’s more on the way. Grab a bucket.