My best insider source states that FBI Director James Comey has absolutely no law enforcement background, and is not qualified to run the FBI. To add insult to injury, the FBI Director held an executive position at HSBC Bank, while extreme money laundering operations where being carried out by the Mexican Drug Cartel and their terrorist allies with the direct assistance of HSBC banking officials. I asked my source if Comey would have known, and he replied “he would have to have been drunk 24/7 to not know what was going on”.

As the caption indicates, Comey has a very questionable background after having worked at HSBC bank, one of the most scandalous banks in history. So, should we be surprised that Comey essentially gave Clinton a walk, despite her blatant criminality? Better yet, why isn’t he investigating Attorney General, Loretta Lynch(mob) in regard to her conflict of interest meeting with Bill Clinton, regarding Hillary’s fate. That is because the FBI Director is just ass dirty as Lynch and the Clintonistas. 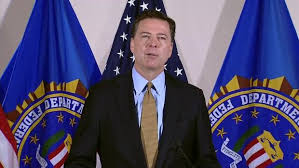 FBI Director is clearly motivated to retain his job after Clinton is elected than he is in performing his sworn duties as an FBI Director. Comey is one of the faces of the criminal enterprise mafia that has taken over the U.S. government.

Comey did not just work at HSBC bank as his resume indicates (see below). He was on the Executive Board at the very time the HSBC scandal was breaking. There is no way he did not know as he looked the other way. And when he was vetted for his job as FBI Director, they knew then, he was in a key position of an organization that was caught laundering Mexican drug cartel money for the Sinoloas, the Los Zetas and their terrorist allies. Yet, despite this information which is publicly available, he was made the FBI Director with no law enforcement background! Now, are surprised that he just issued a de facto pardon for criminal Hillary over the email scandal?

If you are not familiar with the HSBC bank, this link will grant you acces to an interview I did with John Cruz who formerly worked at HSBC. Cruz tried to blow the whistle but nobody in the federal government would pay attention, at least intially. Eventuallly, this turned into the nation’s biggest banking scandal. Here is the link tot he page that contains the Cruz interview.  Paste this into your browser and you will come to a page that contains the Cruz interview.  http://www.thecommonsenseshow.com/2012/12/03/archives-december-2012-the-common-sense-show/     You will have to scroll down the page about half way until you “John Cruz” in bold. Remember, Comey was on the Board of Directors while this scandal was going on. He had a duty to know what was going on and then report these criminal actions to tha authorities. Comey should resign in disgrace at this revelation. As you listen to the Cruz interview, keep in mind that this happened on Comey’s watch.

Effectively, Comey is a globalist, an appointed political hack who has shown that he is cut from the same New World Order cloth as Hillary Clinton. Sadly, we have become a nation that is operating without the rule of law.

In lieu of the Clinton/FBI miscarriage of justice fiasco, every American needs to ask themselves, why should they follow federal law? Why should the people pay their taxes to support such a corrupt government? Why should any of us ever believe anything these gangster thugs ever say?

Here is Comey’s professional background as per Wikipedia.

In December 2003, as Deputy Attorney General, Comey appointed the U.S. Attorney in Chicago, close friend and former colleague Patrick Fitzgerald, as Special Counsel to head the CIA leak grand jury investigation after Attorney General John Ashcroft recused himself. In August 2005, Comey left the DOJ and he became General Counsel and Senior Vice President of Lockheed Martin. In 2010, he became General Counsel at Bridgewater Associates. In early 2013, he left Bridgewater to become Senior Research Scholar and Hertog Fellow on National Security Law at Columbia Law School. He also joined the London-based board of directors of HSBC Holdings. In 2013, Comey was appointed as the director of the FBI by President Barack Obama.”

Finally, here is the breakdown of the globalist background of the current FBI Director. This short video will detail the fact that the Director is a globalist and has gotten his hands dirty in one of the biggest banking scandals in American History. Director Comey is representative of the type of thugs that comprise the Obama/Clinton cabal.