At this point I’d like to remind everyone that crime in the U.S. has been dropping since the 1990’s. So why has domestic police force militarization been growing exponentially since then? Ostensibly, it is for the “war on terror” and to keep us safe. In reality, we know this is bullshit. Just like the NSA’s unconstitutional spying hasn’t stopped a single terrorist attack, turning local cops into a domestic army hasn’t done a single thing to make us safe. To the contrary, it is creating an environment where the general public harbors increased resentment and skepticism toward police, and the police view the citizenry as the “enemy.” This takes the societal tinderbox that already exists and makes it downright explosive. Ferguson is just the latest example of the tension bubbling to the surface, but there will likely be many more in the future.

– From the 2014 post: “A Good Time Was Had By All” – The Obamas Dance the Night Away as Ferguson, Missouri Burns

Last spring, I highlighted the egregious and barbaric shooting of Walter L. Scott as he fled from a South Charleston, South Carolina police officer. In light of recent events, it’s crucial to recall the sordid details of this case. As such, here’s a excerpt from the post, South Carolina Cop to Be Charged with Murder for Shooting Man 8 Times in the Back as He Ran Away:

The video at the end of this story is really hard to watch. Not just because we see a police officer gunning down a man as he ran away, but because he repeatedly yells at a dead body to “put his hands behind his back,” and then seemingly plants his taser by the corpse to cover up the crime.

Just like with banker theft, unless people are held accountable with serious jail time, the criminality will not only continue, it will get worse. The rule of law must be restored and applied equally to the rich and powerful, or we are truly doomed as a society.

Although I haven’t been as focused on police brutality and murder this year, that doesn’t mean the problem’s gone away. Just yesterday, a very disturbing incident occurred in Baton Rouge, Louisiana that once again looks a lot like straight up police murder. As is often the case, the victim was a marginalized black man merely trying to make a buck in an incredibly corrupt and rigged economy.

Here’s the tragic case of Alton Sterling, as reported by the New York Times:

Scores of protesters gathered in Baton Rouge, La., on Tuesday night after a black man was fatally shot in an encounter with police officers earlier in the day, an incident that was captured in a graphic cellphone video that began circulating on social media.

The victim, Alton Sterling, 37, was killed in a shooting at about 12:35 a.m. on Tuesday, the Baton Rouge police said in a statement. The police had received a call from someone who reported having been threatened by an armed man wearing a red shirt who was selling CDs outside a store in the eastern part of the city, the statement said.

A police spokeswoman reached early Wednesday said that she could not comment beyond the statement, which provided no details of what it called an “altercation” between Mr. Sterling and the two officers who responded.

William Clark, the coroner of East Baton Rouge Parish who is known as Beau, said that Mr. Sterling had died at the scene from multiple gunshot wounds to the chest and back.

A cellphone video shot by a bystander, which was released later in the day, showed Mr. Sterling being tackled by a police officer. He is then held to the ground by two officers, and one of the officers appears to hold a gun above Mr. Sterling’s chest.

Before you accuse Mr. Jackson of exaggeration, watch the video below and make up your own mind.

I think it’s quite fitting that the shameless police murder above occurred on the exact same day that Hillary Clinton was set free by the top cops in the nation thanks solely to her position of power and influence. Benjamin Dixon said it perfectly last month in the following tweet:

None of this will be lost upon a citizenry which is already seething with rage and very close to a tipping point. Increasingly, the general public is coming to the very unpleasant realization that they live in a corporate oligarchy in which they are subjects rather than citizens. The more they are pushed into a corner, the sooner they will lash out in all sorts of ways.

The generational level revolts I anticipate have been a long time coming and will emanate from both rural, largely white America, as well from inner city communities populated mostly by minorities. The key thing we must all bear in mind going into the turbulent times ahead is that we are all in this together.

The status quo doesn’t care whether you are black, white, Jewish, Muslim, Christian, male, female, straight, gay or transgender. To the status quo we are all expendable peasants — cannon fodder. The establishment loves to play up the differences between us in order to divide us, but they don’t care about any of us. They will allocate all their energy and efforts into dividing and conquering the public in the period of civil unrest to come. If we fall for this trap we will have only ourselves to blame for the failure to turn grassroots protests into genuine, systemic change.

The other key variable as to whether the forthcoming rebellions result in any positive change will revolve around what form they take. When I say civil unrest, I am well aware that this likely means some degree of violence and looting; however, such expressions of frustration will do far more harm than good. We must recognize that as it stands the status quo has no actual legitimacy, and therefore can only succeed if it’s able to portray the abused public as the bad guys, and sell us on the idea that the U.S. government is the only thing standing between us and violent mobs.

If you want to win this battle, you need to be smart. Winning the hearts and minds of the general public is absolutely critical, and shouldn’t be difficult in an environment in which the establishment discredits itself on a daily basis.

To summarize, I think the activist community across American needs to do two things:

1. Stick together. Black, white, rural, urban, we are all in this together. Don’t allow yourselves to become divided — we have the same opponent. Never forget that.

2. Keep things non-violent. If violence happens, always make sure the government fires the first shots. If the general public perceives you to be out there looking for a fight as opposed to reacting to state aggression, you will lose. Think outside the box, be creative and employ non-violent civil disobedience whenever possible.

A perfect example of what not to do was seen earlier this year in Oregon. See: A Stupid Standoff but a Just Cause – My Thoughts on the Hammond Situation.

John Lennon had it absolutely right. If we’re going to achieve real paradigm-level positive change we must always remember his words: 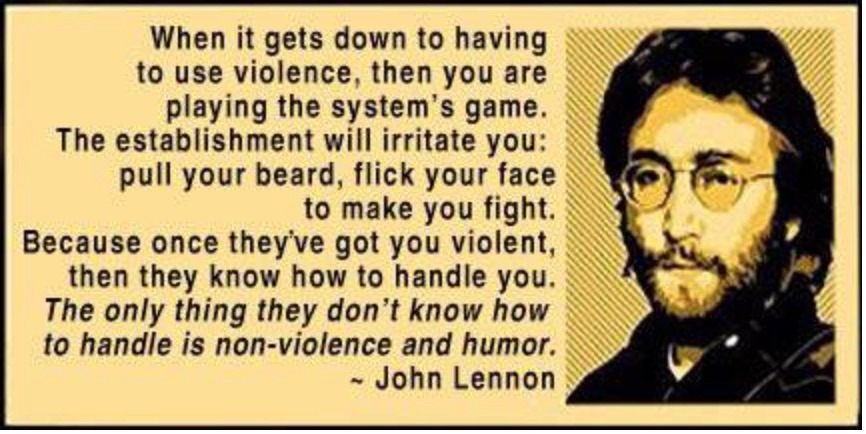