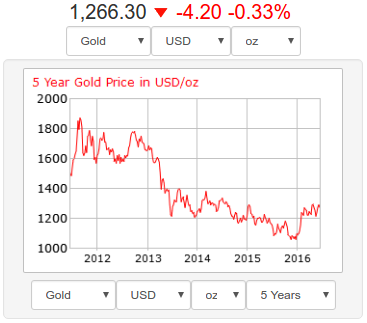 But it was just a few billion free dollars ago that the S&P wasn’t in such bullish form.

So the notion of gold trading higher than the S&P is no strange phenomenon. In fact, that was largely the case from 2010 through 2013.

And it will soon be that way again. Sooner, probably, than most imagine, as the narcotic drip of what the educated addicts call “accommodative monetary policy” fails more and more often to deliver the required euphoric high.

All it’s going to take is a small portion of the world’s capital to look for a friendlier home, just as it did from 2007 through late 2011 when gold tripled its value as the S&P got cut nearly in half.

Gold was friendlier than equities at that time, the latter of which had become toxic thanks to ill-conceived Wall Street products and worse ethics.

To “fix” the problem, we got Quantitative Easing and Operation Twist and money printing and bond buying and a thousand other terms you’ve heard that did little to nothing to improve the underlying issues but did wonders for bank and corporate balance sheets.

It’s amazing what free money can do.

Armed with free money and a wink and nod from the Fed that it would stay that way, banks began buying stocks.

And wouldn’t you know it, when you have limitless capital to buy stocks… stocks go up. Trading desks at banks delivered record profits. Corporations simply began buying their own stock rather than investing in their businesses to actually grow. Teenagers became hedge fund managers.

It became — and remains — farcical.

But all the while — as stocks marched higher — there was this underlying sense that much remained wrong.

The number of jobs grew, but wages didn’t. The richest among us got richer, but no one else did.

And as I’ve said for years now, when you have a consumer-based economy but the consumer isn’t recovering, you have to put “recovery” in quotation marks.

It has been only a paper recovery, a papered-over recovery if you’re a cynic like me.

Now, all the monetary stops have been pulled out. And still, the underlying economy won’t heal. The world’s string-pullers are hanging by a thread.

And to keep the narcotic drip going, they have now taken to rates negative.

For the first time this month negative-yielding debt has topped $10 trillion.

That is no longer a friendly home for capital. The free money that was meant to spur growth has instead created massive asset bubbles.

It drove stocks higher for some time as rates went lower and lower, but now that they’re negative that bond money will look for a new, safer home. Why on Earth would you pay someone to hold your money?

That is where we’re at. The Fed helped markets defy logic and gravity for the past few years, but the facade is now wearing thin, the chickens are coming home, pick your saying.

Banks are laying off staff by the tens of thousands. Bank of America announced it’s laying off 8,000 just a few weeks ago. JP Morgan, BMO, RBS, Goldman Sachs, and many other major banks have fired thousands more.

The party is ending. In terms of price-to-sales ratio — the price a stock is trading relative to the revenue it generates — stocks have never been more expensive. The median price-to-sales ratio for all S&P 500 companies is now over two. That’s the highest it’s ever been. It was below 1.6 during the tech bubble and below 1.75 during the housing bubble.

This is the most expensive stocks have ever been.

And the thesis for gold to pass the S&P is a simple one. All it will take is a bit of the smart money heading into the safety of precious metals to significantly increase their prices.

Billionaire Ray Dalio, who runs one of the most successful hedge funds in the world, is now saying to buy gold.

Bill Gross, the bond king, says the $10 trillion of negative bonds will explode like a supernova.

We just learned that George Soros bought over $123 million worth of gold-backed funds in the first quarter as well as bought 19 million shares of Barrick Gold. (More on how billionaires are now buying gold here.)

I have personally taken all my IRA money out of stocks.

This is all beginning to play out now. And as the script flips for stocks and gold over the next few years, much pain will be felt.

I actually feel sorry for those who don’t see it coming.

But for those who do, and who position themselves correctly, owning the right resource assets over the next few years could prove to be the opportunity of a lifetime.

We are now recommending the purchase of what we consider to be the best-in-breed junior mining assets out there.

You can click this link to see our rationale for that, to see the research approach we use, and to set yourself down the path to gold gains instead of stock pain as this all plays out.