While information is coming out faster than we can keep up with about the Orlando massacre where up to 50 people were killed at the gay nightclub “Pulse,”  with another 50+ injured, where we see the killer Omar Mateen “swore allegiance to the leader of ISIS in a 911 call moments before the rampage at Pulse,”  as well as having previously been investigated by the FBI over “inflammatory” comments about radical Islamic propaganda,” we see the MSM attempting to push an “anti-gay” agenda as the cause of the brutal massacre and Barack Obama once again dancing on the graves of the victims to push for more gun control, while refusing to even speak the words “radical Islamic terrorism.”

Sign up for The Daily Coin Newsletter Here! While ANP has published a follow-up on the Orlando shooting in an article titled “Insiders On ISIS Terror In America: ‘It’s Going To Get Way, Way Worse’ – ISIS Plan To Attack 6 US Cities Leaked – ‘It’s Going To Be A Very Bloody Summer In America‘,” this article is going to focus on Islam itself, its teachings that homosexuality is a crime punishable by death, the massive amounts of attacks and deaths across the world in the name of Islam in June, the Islamic Holy Month of Terror, and why Barack Obama is ignoring the dangers of importing terrorists into America as he attempts to disarm Americans. WHAT OBAMA WON’T TELL YOU What Barrack Hussein Obama will not tell you is that at least 226 terror attacks have occurred over the last 30 days by Islamic Jihadists, in 32 different countries, including the U.S. after the orlando massacre, where at least 2,230 people have been brutally slaughtered and over 2,224 people have been injured, by the so-called “religion of the peace.” (Source and full list of attacks over the last 30 days) 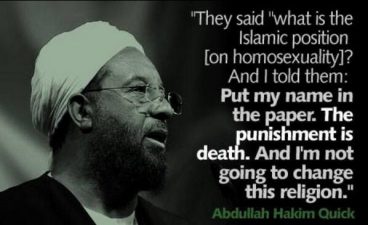 According to the list provided by the website “Religion of Peace” some of the more brutal radical Islamic attacks over the last 30 days include  a A double suicide bombing outside a Shiite mosque in Syria which killed 20 people on June 11;  Islamists spray machine-gun fired into a crowd of women and children trying to flee the caliphate, killing at least 30 in Iraq on June 10;  ISIS members massacred at least thirty-seven villagers, including women and children in syria on June 10; A Sunni suicide bomber targets a commercial district in a Shiite area, killing 19 in Iraq on June 9; Dozens (43) of AU peacekeepers are massacred during an al-Shabaab suicide assault in Somalia on June 9; At least 25 defenders are killed during an ISIS assault on a small town in lybia on June 8; The Taliban stop vehicles along a highway and massacre a dozen occupants in Afghanistan on June 7; Eleven people are executed in front of their families for trying to flee the caliphate in Iraq on June 6; 65 civilians, including university students, are rounded up and executed by caliphate staff in Iraq on June 6; Two killed and 27 injured when Islamists target a church with rockets in Syria on June 5; Thirty-four Iraqis are killed by two Islamic State suicide bombers on June 4; A mass grave is discovered containing at least four hundred victims of ISIS executions on June 4; Ten women and a girl are among seventeen shredded by Shiite shrapnel at a market on June 3; Thirty-two defenders are slain during a massive Boko Haram assault on a small town on June 3; Nineteen Yazidi girls are put in cages and burned alive for refusing sex with caliphate members in Iraq on June 3. That is just a small sample of attacks in June 2016, the Islamic Holy Month of Terror. See all the Jihadist attacks, deaths and injuries at “Religion of Peace.” OBAMA IGNORES ISLAMIC TERRORISM AND QUARAN TEACHINGS ABOUT KILLING GAYS While Obama attacks guns and claims “we need the strength and courage to change” our attitudes toward the gay, lesbian, bisexual and transgender community, he makes no mention of the fact that Islamic terrorists are killing gays across the globe,  he also doesn’t mention that “they” need to change their attitudes, nor does he even acknowledge that the attack that happened in Orlando was a Islamic terrorist attack. Neither does Obama acknowledge that he waved a red flag in front of a bull when he once again used his position to push his “Proclamation” of June being “Lesbian, Gay, Bisexual and Transgender” month in the U.S., knowing that June is also the Islamic holy month of terror, Ramadan. We know Obama was aware of Ramadan as the White House website posted his “statement” on the occassion of Ramadan on June 5, 2016. What Obama understands but does not want Americans to understand is that there are multiple references to homosexuality in the Quran…. Islam as a religion considers homoosexuality as an offense punishable by death. This is also evidenced by statements made in April by an Imam in Orlando, where the brutal massacre just occured, , stating that homosexuals should be killed “out of compassion.” By focusing on the LGBT agenda, diversity and gun control, Barack Hussein Obama and Hillary Clinton, are deliberately ignoring that guns do not shoot themselves, there is always a finger behind the trigger and that finger in the case of the Orlando massacre, was an Islamic extremists that swore allegiance to ISIS, a man taught by his own religion that homosexuality if a crime punishable by death. Via Heavy.com: Homosexuality is “illegal” under sharia law, and being accused of it is punishable by death. “Hudud” is a punishment mandated by god in the Quran. “Liwat” is charge of engaging in homosexual sex. The hudud for liwat in the Islamic State is being thrown from the top of a building and then stoned to death by the watching public. While Obama is busy trying to misdirect Americans from the fact that the Orlando shooter was of Afghanistan descent, as well as a radical ISIS supporter, we note that 99 percent of Afghans support Sharia law as the official law, with 51 percent of Muslims living in America today believe Sharia should be the law in the U.S. and 25 percent saying that violence against Americans is acceptable if they offend Islam. In another example of pathetic attempts to misdirect America, the ACLU is trying to blame “conservative Chsritians” for the fact that the Islamic religion believes homosexuals should be slaughtered. Really? Was it a Christian that walked into the Pulse nightclub and slaughtered 50 people?  Was it conservative lawmakers that brutally massacred those 50 people? No, it was a member of the “religion of peace.” BOTTOM LINE Sharia is derived from the religious precepts of Islam, particularly the Quran and the Hadith. The term sharia comes from the Arabic language term sharīʿah, which means a body of moral and religious law derived from religious prophecy, as opposed to human legislation. (Source) The fact is Sharia, which is derived from the teachings of the Quran, is incompatible with the U.S. constitution, specifically the First, Second, Fifth, Sixth, Seventh, Eighth and Fourteenth Amendments. In the video below you will hear an Imam, described as an “Islamic Scholar,” by the name of Abdullah Hakim Quick, where he states the  “Islamic position” on homosexuality by answering “So I said: Put my name in the paper. The punishment is death. And we cannot change Islam” (Relevant portion at the 2:00 minute mark) That ladies and gentlemen is the bottom line, the fact that Barack Obama, the ACLU, Democrats, Liberals and Progressives absolutely refuse to admit…. Islam will not change.

Until we have a leader willing to name the enemy, we will continue to see attacks on American soil, like the one on June 12 in Orlando, and the attack in San Bernardino California. In the meantime the LGBT community are so brainwashed, they are encouraging the importation of their own executioners. 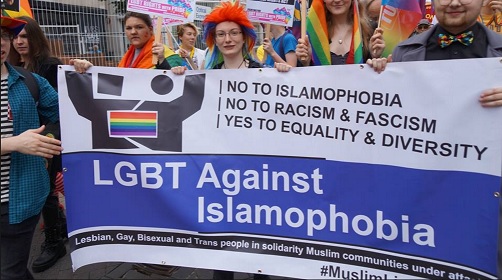 The Muslim reponse to them below: 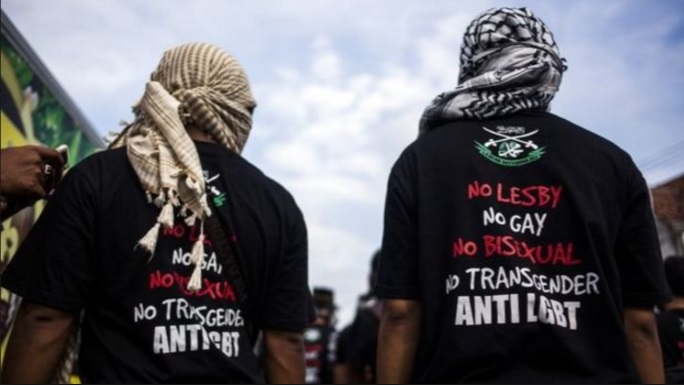