The Debt That We Will Never Be Able To Pay Back

by Chris Vermeulen, Gold-Eagle Do you realize that every member of your family owes a debt of $59,568.00? That is the debt per person within the U.S., which the U.S currently owes.  This debt will never be able to be paid off. You can get a visual picture of this debt by viewing the debt clock. Not only is the debt astronomically high ($19 trillion), but it is ever-increasing at an alarming pace.  Additionally, the debt is only going to increase, with every passing second, as time goes by.

Why Did Out Debt Increase So Much?

In the decade since the last financial crisis, in 2007, the debt has exploded by almost 250%, as shown in the chart below.

In order to avert short-term pain, the central banks, in their infinite wisdom, began printing money. Central bankers wanted a Quantitative Easing (QE) “wealth effect,” where stock price increases would pump-up consumer spending, and, thus, business production. Their hope was that stock prices and business production would rise together – a balance that would avoid stock market ‘bubbles’.

However, the real economy never received the benefits of the QE as the GDP has been contracting in this mature economy. The money was merely used to inflate asset prices, thus, pushing the stock market into bubble territory. The FED was caught up in its own doings. Every time the stock market showed signs of weakness, the FED stepped in to support it by introducing more QE and easing measures. It is not only the FED, but also the central banks, globally, that have resorted to QE.  Additionally, a few others have gone a step further and introduced a Negative Interest Rate Policy (NIRP). Even the FED, which increased interest rates by 25 bps in December 2015, had initially planned to hike interest rates by one percentage point in 2016. However, within three months, they altered their plans and reduced the expected rate hike to half of a percentage point in 2016. Despite this, I believe that they will not hike more than a quarter of a point during this year. Central bankers are in uncharted waters. They do not know how to create economic growth and fight deflation. Additionally, they do not know how to return to a time period with normal monetary policy. We are addicted to debt. The total U.S. debt markets are now over $60 trillion. This impact is a result of devaluing of the U.S. dollar!  The FED has no choice left but to inflate its way out of this debt.

Along with the risk of not being able to pay back the debt, there are systemic risks to the USD. Only recently, Saudi Arabia, a long-term ally of the U.S., threatened to sell more than $750 billion in U.S. assets.  If an ally can threaten to liquidate U.S. Treasuries and other assets, what would happen if either China or Japan, which hold more than $1 trillion each in U.S. Treasuries, had to sell them? The chart below shows the data, as of January 2015. 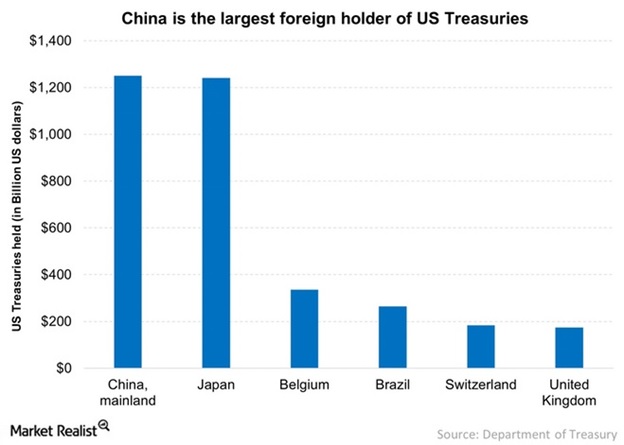 Chart of who owns US securities. The U.S. Treasuries are considered one of the safest assets in the world to own. Although we may never default, as the U.S. continues to print more dollars, it may have to buy back the debt at a discount after negotiations. Although this seems to be a good plan, as suggested by Presidential Nominee Donald Trump, any negotiations on U.S. Treasuries will jolt the financial market throughout the world. When the safest asset classes are no longer safe anymore, the world will have no option but to go back to the time-tested asset class, which has withstood financial turmoil over thousands of years. Gold’s important, even in today’s environment. It was clearly visible during the massive rally in gold at the beginning of this year, when all other asset classes were tanking. Investors piled into gold in fear of a likely financial crisis occurring in the world. Gold demand reached 1,290 tons in Q1 2016, a 21% increase year-on-year, making it the second largest quarter on record. This increase was driven by huge inflows into exchange-traded funds (ETFs).  The purchase of 364 tons was fueled by growing indications of the shifting global financial mood of new systemic risks. Investors at all levels of experience are attracted to gold as a solid, stable, tangible, and long-term store of value that, historically, has moved independently of other assets. My analysis shows that gold will be implemented to protect global purchasing power and minimize losses during our upcoming periods of market shock. It serves as a high-quality, liquid asset to be used when selling other assets would cause losses. Central banks of the world’s largest long-term investment portfolios use gold to mitigate portfolio risk in this manner and have been net buyers of gold since 2010.

Investors should make use of gold’s lack of correlation with other assets, which makes it the best hedge against currency risk. The correct and proper time to buy gold is right around the corner!  After the price of gold rose to $1300 per ounce, it has retraced close to $1215 per ounce. The current drop in price will provide investors with a great long-term buying opportunity. 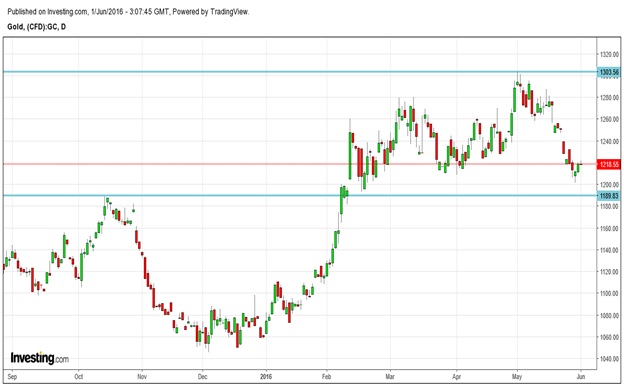 Although we are in for a period of great financial turmoil, investors can safeguard themselves by investing wisely in gold and silver. Do not get left behind and have your dollar assets lose their value. Invest in gold and silver, and continue to view this space in order to time your entry appropriately! Also, I should mention that I feel there will two large moves in bond prices that will directly affect almost every investor around the world if they are on the wrong side of the second move. Stay tuned for what you should be slowly preparing for over the next 1-3 years.