The Case For A Super Glass-Steagall

by David Stockman, Contra Corner Donald Trump can instantly get to the left of Hillary with respect to Wall Street and the one percenters by embracing Super Glass-Steagall. The latter would cap U.S. banks at $180 billion in assets (<1% of GDP) if they wished to have access to the Fed’s discount window and have their deposits backed by FDIC insurance. Such Federally privileged institutions would also be prohibited from engaging in trading, underwriting, investment banking, private equity, hedge funds, derivatives and other activities outside of deposit taking and lending. Instead, these latter inherently risky economic functions would be performed on the free market by at-risk banks and financial services companies. The latter could never get too big to fail or to manage because the market would stop them first or they would be disciplined by the fail-safe institution of bankruptcy. No taxpayer would ever be put in harms’ way of trades like those of the London Whale.

By embracing this kind of Super Glass-Steagall Trump would consolidate his base in the flyover zones and reel in some of the Bernie Sanders throng, too. The latter will never forgive Clinton for her Goldman Sachs speech whoring. And that’s to say nothing of her full-throated support for the 2008 bank bailouts and the Fed’s subsequent giant gifts of QE and ZIRP to the Wall Street gamblers. Besides, breaking up the big banks and putting Wall Street back on a free market based level playing field is the right thing to do. Today’s multi-trillion banks are simply not free enterprise institutions entitled to be let alone. Instead, they are wards of the state dependent upon its subsidies, safety nets, regulatory protections and legal privileges. Consequently, they have gotten far larger, more risky and dangerous to society than could ever happen in an honest, disciplined market. Foremost among these artificial props is the Fed’s discount window. The latter provides cheap, unlimited funding at a moment’s notice with no questions asked. The purpose is to insure banking system liquidity and stability and to thwart contagion, but it also nullifies the essential bank management discipline and prudence that comes from fear of depositor flight. Likewise, FDIC insurance essentially shields banks’ balance sheets and asset management practices from depositor scrutiny. Whatever its merits in behalf of the little guy, there is no doubt that deposit insurance is a fount of moral hazard and excess risk-taking in the bonus-driven executive suits. Indeed, the function of maturity transformation—–borrowing short and lending long—-which is the essence of fractional reserve banking is inherently risky and unstable. Once upon a time the state attempted to limit banks’ propensity for excesses by permitting injured depositors to bring suit against stockholders for double their original investment. That tended to concentrate the minds of bank boards and stock owning executives. The opposite incentives prevail in today’s bailout regime. Under current legal and regulatory arrangements shareholders and boards face no liability at all—let alone double liability—-for mismanagement and imprudent risk taking. Instead, insolvent or failing institutions are apt to be bailed-out; and even if share prices are permitted to plunge, boards and executives are likely to be given new stock options struck at the post-collapse price. That happened in every big bank in America after the 2008 meltdown. Likewise, prior to the establishment of the Fed and its bailout windows, the big New York money center banks were required to remain super liquid by holding cash reserves equal to 20% or more of despots. In that regard, the post-Keynesian history books have been stripped of the fact that even at the peak of the infamous banking crisis on the eve of FDRs inauguration in March 1933 none of the big New York City banks had lines at their teller windows or were in any way illiquid or insolvent. By contrast, one of Greenspan’s most deleterious actions was to essentially reduce cash reserve requirements to zero. Owing to the release of such immobilized assets, of course, banks became more profitable. Yet the ultimate cost of keeping the banking system liquid was not eliminated; it was just transferred to public institutions including the Fed, FDIC and eventually the US Treasury via TARP. All of these violations of free market discipline have had a cumulative historical effect that’s no longer tolerable. And these distortions, disincentives and moral hazards were immensely compounded by two decades of monstrous bank merger roll-ups that resulted in incomprehensible and unmanageable financial services conglomerates like Citigroup. Indeed, the worst excrescence of that trend—-the merger of Travelers and Citibank—–happened only after the old Glass-Steagall was repealed in 1999. Once these unnatural and inherently unstable multi-trillion financial services conglomerates came into existence after the turn of the century, the subsequent regulatory acquiescence in the 30:1 leverage ratios achieved by the Wall Street brokers, including the vast investment banking operations inside Citigroup, Bank of America and JPMorgan, only added insult to injury. So did the regulatory lapse which enabled Citigroup and others to establish trillion dollar off-balance sheet SIVs during the run-up to the financial crisis. Indeed, the Citigroup style of rogue financial behemoths should have been put out of their misery by the FDIC when they failed in 2008. But their screaming insolvency—–including that of Goldman, Morgan Stanley, Bank of America and others—- was covered up by multi-trillion bailouts from the Fed’s alphabet soup of liquidity infusions and TARP.

Indeed, Washington’s desperate thrashing around in the bailout arena resulted in the worst of all worlds. The problem caused by too-big-to-manage government enabled financial conglomerates was made far bigger by Washington sanctioned and directed mega-mergers. These included the shotgun marriage of Bank of America and Merrill Lynch, the Federally subsidized takeovers of Bear Stearns and Washington Mutual by JPMorgan and the rescue of Wachovia by Wells Fargo. These mergers were outright madness. As shown in the chart below, we now have five Federally subsidized and underwritten behemoths that control $7 trillion of assets and nearly 50% of the banking market. And these figures do not include Goldman Sachs and Morgan Stanley, which also have bank charters, and would add another $1.7 trillion of assets and bring the concentration level to upwards of 60%. I 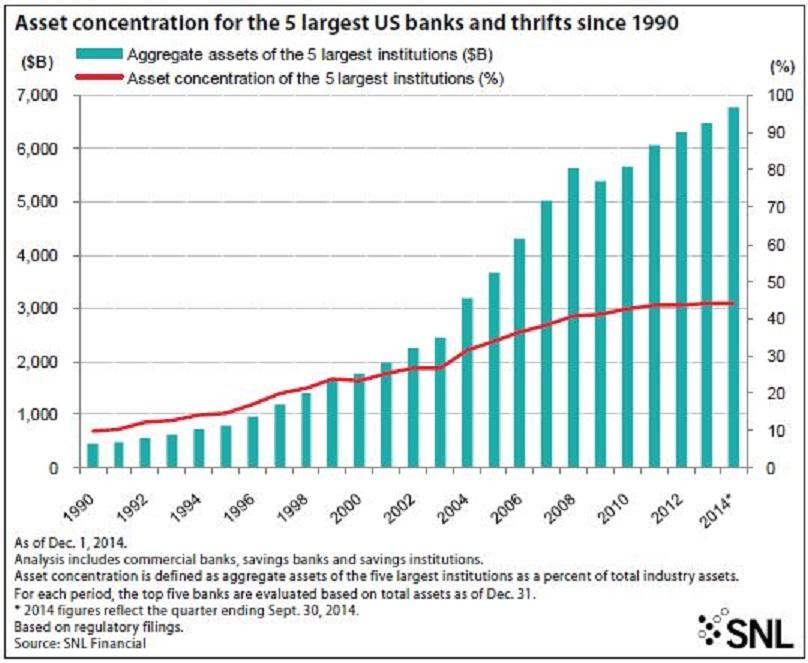 Again, this is not about bigness per se or anti-trust populism, but about dangerous financial conglomerates that would not even exist without the dispensations of government, and would not persist if they did not hire half of the K-street lobby complex to protect their privileges. If Congress had really meant to fix the system that supposedly brought us to the cusp of Armageddon in September 2008 it would not have bothered with Dodd-Frank at all—-and its incomprehensible 1,700 pages of legislative pettifoggery and 10,000 pages of implementing regulations that metastasize by the day, and will do so as far as the eye can see. Instead, it should have gone to the root of the problem and passed a Super Glass-Steagall that would have  kicked the Wall Street based gambling houses out of the FDIC entirely. The fact is, deposit insurance has been coopted and abused by the Wall Street mega-banks for decades, and now stands as a vast perversion of what had actually been intended—-misguided or not—way back in the dark hours of 1934. Back then there were three people in Washington who counted when push came to shove—–FDR, Senator Glass and Congressman Steagall. FDR was against deposit insurance because he thought it would be abused by Wall Street, and for once he was right. Senator Glass was against it, too, because as one of the true financial statesman of modern times he did well and truly understand the dangers of moral hazard and fractional reserve banking propped up by the state. Alas, Congressman Steagall was a demagogic foe of Wall Street, and only wanted deposit insurance to protect the red-neck depositors of Alabama, who had been taken to the cleaners by banksters of local origin. So we got deposit insurance for the proverbial “little guy” and a sharp separation of banking and commerce at the insistence of Senator Glass. And for at least a generation, Wall Street—-which was still run by the chastened survivors of the 1920s gambling orgies and the Crash of 1929—-kept its distance and its lobbyists at home. By contrast, today we have almost the opposite history. Wall Street is run by a generation that has been bailed-out too many times to count and that has been blatantly and egregiously coddled by perverse central bank theories and practices that have turned the nation’s capital and money markets into veritable gambling casinos. This includes such practices as the stock market “puts”, the “wealth effects” doctrine and years and years of ZIRP. The latter is nothing more than free gambling money that can be used to fund the carry trades—-that is, using free overnight money to buy anything with a yield or prospect of short-term gain—–and that can be rolled over day after day with the assurance from the Eccles building that the cost of carry is fixed and subject to change only upon ample notice. (To be continued)