by Mike Gleason, Money Metals Coming up Michael Rivero of WhatReallyHappened.com updates us on some of the key developments in the ongoing attempt by the central planners to bring about a one world government, when and why we’re likely to see a massive inflationary uptick in the not too distant future, and how gold and silver may end up being the key beneficiaries as the masses discover them as the safe haven assets to own. Don’t miss our explosive interview with a man who pulls no punches, Michael Rivero, coming up after this week’s market update. After suffering through a sharp pullback in May, gold and silver markets could be eyeing a bottom in the trading so far in June. Gold touched the $1,200 level on Tuesday and managed a small bounce off that key level. As of this Friday morning recording, gold is surging and is up close to $30 so far on the day with the spot price coming in at $1,241 an ounce now, up 2.2% for the week. Turning to silver, prices dipped below $16.00 per ounce earlier in the week as that market appeared headed for a fifth straight week of losses. But silver closed Thursday back above the $16.00 level, though just barely. But, like gold, the white is rallying nicely today and now trades at $16.39 an ounce, now eking out a small 0.7% weekly advance.

Platinum and palladium prices had also been moving to the downside over the past month. As for this week platinum is now flat since last Friday’s close thanks to this morning’s advance to trade at $980 an ounce, while palladium shows a weekly gain of 1.5% to trade at $548. The fortunes of the precious metals markets going forward will be tied to the direction of the U.S. dollar. The Dollar Index surged last month from a low of around 92 to a reading of nearly 96. This week the dollar is trading virtually flat versus a basket of foreign currencies. Currency markets took the latest announcement from the European Central Bank in stride. On Thursday, the ECB left interest rates unchanged and vowed to stay the course on its bond buying campaign. No surprise there. Eurozone economies continue to show moribund growth and stubbornly low inflation, despite a recent uptick in oil prices. The question for investors is whether the U.S. economy will increasingly look more European. If signs of a slowdown here at home grow, investors may come to realize that the stock market and the U.S. dollar are overpriced. Several prominent billionaire investors are now warning that financial markets are at risk of suffering a crash. Globalist kingmaker George Soros recently slashed his equity exposure and loaded up on gold and gold mining shares. Former George Soros associate and billionaire trader Stanley Druckenmiller says the Federal Reserve’s efforts since 2008 to keep the stock market propped up have created dangerous distortions. Druckenmiller is now hedging himself with a large position in gold. AUDIO INTERVIEW DOWNLOAD/LISTEN HERE>>> Meanwhile, legendary investor Carl Icahn is so concerned about the stock market the he has taken out a massive 150% net short position in equities in hopes of profiting from a crash. Bonds are normally seen as a safe haven from stock market volatility. But billionaire bond guru Bill Gross is worried that markets have mispriced credit risk across the board. In a recent interview he warned that the financial system is at risk.

Bill Gross: I’m an investor that ultimately does believe in the system, but believes that the system itself is at risk.

A lot of smart money sees trouble ahead. How far ahead is unknowable. No one knows exactly when the next financial crisis will hit. Perhaps it will be triggered by a Federal Reserve policy mishap this month or next. Or perhaps the powers that be will keep markets propped up until after the election. Hillary Clinton is now trying to make political hay over the fact that her Republican rival Donald Trump sought to profit from the bursting of the housing bubble. Of course, Mrs. Clinton has been cozy with enough Wall Street fat cats over the years to know that successful investors look for ways to capitalize on bear markets. Anyone who understands the idea of “buy low, sell high,” as Mr. Trump surely does, knows that bear markets create the greatest buying opportunities in beaten-down assets.

Donald Trump: I hope that (a housing correction) happens because then people like me would go in and buy. If there is a bubble burst as they call it, you could make a lot of money. He wanted to buy housing when it was at a low point. Who the hell doesn’t? Who doesn’t?

That was Trump first speaking before the housing collapse back in 2006, the statements recently pounced on by Hillary, followed by Trump’s response to her criticisms in one of his recent campaign speeches.

So with the housing market now well off its low point, the U.S. stock market at a very high point, and bond yields seemingly too low to compensate for inflation and credit risk, precious metals are a relatively attractive asset class. Gold is a premier safe haven from turmoil in financial markets, while silver offers superior upside potential during times of rising inflation fears. While there are no guarantees in any market, what is certain at this point in time is that there are few assets in the investment universe as historically cheap as silver now is. Well now for more on what’s ahead for the economy and on the political scene, let’s get right to this week’s exclusive interview. 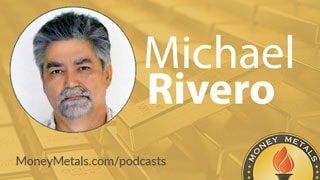 Mike Gleason: It is my privilege now to welcome in Michael Rivero, founder and editor of WhatReallyHappened.com. Michael is a talk radio host and prolific commentator on geopolitics, financial markets, and many other topics. It’s great to have him back with us today. Michael, thanks again for joining us. How are you? Michael Rivero: I’m doing just fine and thank you for having me back. Mike Gleason: I wanted to start off by asking you about the presidential election which has been a free-for-all since the beginning. One headline in the past week has been about a recent poll that revealed a full 70% of Democrats think that Hillary should still run if she is federally indicted. On the other hand, a prominent Democrat pollster said this week that Hillary could lose California’s primary on Tuesday and that, if she does, Sanders can actually win the Democratic nomination. Who do you think will be the Democrat nominee?