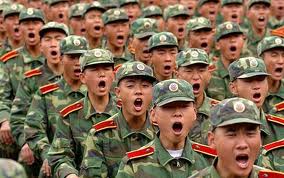 The UN plans to invade the US. This story is how they will attempt to use Chinese troops to accomplish this goal. Synchronicity has struck The Common Sense Show.  In 1993, I listened to the Art Bell Show for the very first time as I listened to Vance Davis, formerly of the NSA. His revelations regarding the current trends at the time in world affairs led me to believe he may have known about my father and his work with captured German Scientists. I could not speak openly at the time because my late father’s Navy’s pension, was the sole source of support for my mother, would have been forfeited if I have publicly revealed what my father told me before his death. But I did not have to, because, initially, Vance Davis did not contact me back. However, a man named Bill Pawelec did.

Who Was Bill Pawelec?

Bill Pawelec told me that Vance Davis had passed along my number to him and asked him to call me because Bill knew my father. After my father retired from Naval Intelligence and then later Martin-Marietta (site of his work with captured German scientists), they had both worked together at Sundstrand Electric in Westminster, Colorado. Bill was a security contractor and did a lot of work with the CIA. As I was fighting for my financial life against John McCain and his globalist friends attempt at putting a CANAMEX super highway through my area. McCain was in favor of not compensating myself and my 300 neighbors. Pawelec managed my fight from behind the scenes. This launched my career in broadcasting and investigative journalism. Very early on, I decided to put the United Nations in my cross-hairs and this is where we came across the work by a man who went by the name of Garudas. It was a pen name designed to keep him safe. Unfortunately, Garudas was murdered in his San Francisco apartment as he was beginning to publish material related to the United Nations and their allies plans to invade and destroy the United States. Using his CIA contacts, Pawelec was able to track Garudas’ materials to a person in Boulder, Colorado. Pawelec traveled to Boulder and offered to buy the material from him. The man became frightened and told Pawelec never to contact him again. This week, the week that I revealed the connections between AMES, the Gurkhas and UWEX 16 and their intent to wage war against rogue American military units that would not go along with the UN takeover of this country, the Garudas’ materials resurface. The remainder of this article will take you back to what Garudaa discovered almost 20 years ago as to what the United Nations was planning to do to the United States.

Below are several references to Garudas observations of an Un takeover fermented by the Chinese whose troops were being funneled into the country through the treasonous complicty of top government officials. From Garudas

“… As the New York Times said in February, 1972 in conjunction with Nixon’s opening to Red China, Nixon was “merely reiterating the belief he brought to China that both nations share an interest in peace and building a new world order.”

This means that we have been sold out by every President since Nixon. From Gaurdas

“China is building a large facility including an ammunition plant in Adelanto, California to distribute its products with 1,000 Chinese workers expected to move in. There are plans to build similar facilities in Charleston, Arkansas, Oklahoma, Texas, Tennessee, Mississippi, and Louisiana. U.S. tax payers are subsidizing a $138 million loan guarantee to build ships for the China Ocean Shipping Co.(COSCO) in Alabama. This company is controlled by the Chinese military.”

Pawelec and I had this information in 2003. We later learned that these workers were actually Chinese military masquerading as workers. From Garudas

“COSCO has been attempting, with White House support, to lease the closed naval facility in Long Beach. Under the agreement U.S. Customs could only inspect one in 8 COSCO ships so it will be impossible to prevent illegal drugs and weapons from entering the U.S. Strategic Investments (May, 1997) said the Chinese military has agreed to distribute opium/heroin for Burma. Last year U.S. Customs in Oakland seized 2,000 AK-47s delivered on a COSCO ship. According to federal documents these weapons were going to street gangs in southern California. Wang Jun chairman of Polytech, the manufacturer of these weapons, attended a White House function in February, 1996. On April 14, 1997 the AP said two truckloads of illegal Chinese arms bound for Mexico were found in a San Diego warehouse. According to the evidence there were four other truckloads of arms from China”

Was this the true beginning of Fast and Furious? And why would the Chinese be interested in arming criminal cartel members south of the border?

The Significance of Long Beach

I want to stress that I am NOT abandoning my position that the Chinese could and would employ weapons against the American grid resulting in catastrophic consequences. If the Chinese cannot bring America to her knees using the three-pronged strategy, they will not hesitate to bring down this country through the application of an EMP attack. Regardless of the Chinese mode of attack, one can rest assured that the Chinese will show America no mercy. At this point, I am offering a corollary to the Mike Adams report of the three-pronged attack by the Chinese upon America. Following the Chinese caused collapse of the American economy, they will need to militarily occupy America in order to reap its vast mineral resources. To do this, they will need occupation troops. If one thinks that the location of these Solar Energy Zones next to a Canamex, or planned Canamex Highway Corridor system is a coincidence, they should take a close look at what is happening at Long Beach, CA. These international corridors would provide excellent transportation routes in order to control what is left of American commerce as well as deploying its occupation troops across the country.