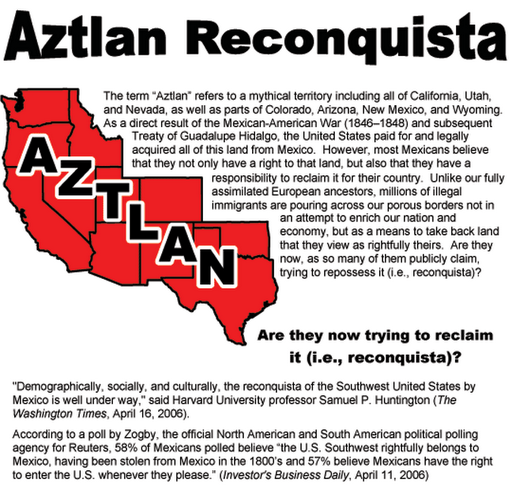 Live Free Or Die “The country that can’t control its borders isn’t really a country anymore.”  — Patrick J. Buchanan paraphrasing Ronald Reagan, State of Emergency: The Third World Invasion and Conquest of America Just over a year ago back in March of 2015, prior to the start of Jade Helm 15, ANP reported on what could either have been called a very strange coincidence or an alarming development: the states participating in JH15 aligned nearly perfectly with a map of ‘Aztlan’, the territory that Mexico hopes to soon take back from the US via Agenda 21 under a forthcoming world government. You can see the maps side by side directly here. Just a coincidence? Much more below including the latest signs that they’re preparing to unleash the ‘North American Union’ before Trump can build a wall.

In our story back in March of 2015, we quoted to you a story from Freedom Outpost called “What Was Once Called ‘Conspiracy Theory’ Is Happening Now”: There is also one more issue to consider when addressing the border situation, and it has do with La Raza and the belief that the U.S. stole Mexican land. There is a plan underway via Agenda 21 to return land to indigenous populations. In fact, this plan can be seen by viewing the 45 communist goals for the takeover of America. Look at goal number 43 for instance

We also told you then that the Barack Obama administration had nearly tripled US government funding to La Raza and warned that Obama and LaRaza were ‘plotting to replace Americans with a country within a country‘ with these two sentences holding a key: I do know that overthrowing colonial governments and returning land to native populations is a United Nations initiative under Agenda 21. I also know that La Raza believes that California and other states in the region rightfully belong to them. 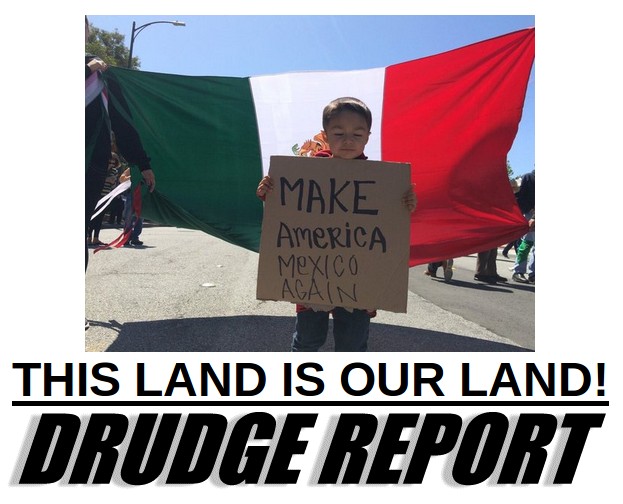 Several stories that Matt Drudge linked to over at the Drudge Report Friday help to tell it all: while protesters formed a human chain to block the entrance to a San Francisco hotel, Donald Trump and his Secret Service entourage are forced to jump a fence to reach their destination while news comes out Barack Obama plans to build a bigger wall around the White House while putting down Trump for wanting to build a wall on our border to help protect Americans. As we see in the screenshot photograph above, while Trump has plans to ‘make America great again’, the protesters and La Raza obviously have something different in mind and as we’re warned in the 2nd video below featuring Rick Wiles of TruNews, Americans “better brace for impact…suddenly, things will change“. Showing once more what a total hypocrite he is for criticizing Trump for wanting to build a border wall, it’s likely that Obamas White House wall is preparing for the mass social unrest that is likely coming to Europe and America as the ‘old’ White House fence failed miserably from keeping jumpers from jumping it. What do they know that we don’t know? Meanwhile, Donald Trump doesn’t miss a beat, trolling POTUS over his desire to build bigger fences and a higher wall around the White House as seen in the tweet he released on Twitter below. 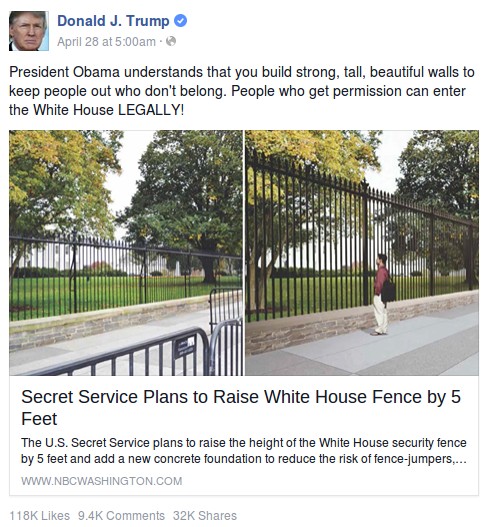 Each day we’re getting more and more signs that the NWO will complete their takedown of America prior to giving our Republic a chance at an ‘America first’ president like Trump and as we’re seeing in the paid protests that have been unleashed by George Soros across America and the preparation taking place by law enforcement across the country for civil unrest, our nation is quickly heading into what could turn into a ‘freefall’. More and more people are being allowed into the country who clearly may not have American’s best interests in mind and as we learn in the videos below, every day we’re watching more ‘end game’ preparation in our country. As David Knight from Infowars tells us in the 1st video below, welcome to Aztlan! What happened in California on Thursday night was an absolute disgrace as we see in this video, people are being beaten and bloodied simply for being Trump supporters while those protesting in the streets demand free education and more ‘free perks’ than those who have been living in America all of our lives. Was Donald Trump ‘chosen’ more than 2 years ago to be our next president just for these reasons as is argued in this story from Z3Newslinked to by Steve Quayle on Friday? Are we now watching the unfolding ‘end game’ and the planned takedown of America as Mexico prepares to ‘reclaim’ parts of California, Arizona, New Mexico, Texas and Soros pushes more and more protesters over the edge to violence? As we have warned on ANP over and over again, we’re seeing more and more proof that when Americas creditors come calling, they’re asking for and receiving US land as compensation. Are we about to witness a major part of the ‘new world order’ come to fruition with the finality of the ‘North American Union’? As we’re told in the final video below, while Americans have been distracted by politics, bathroom issues and racial tension, the North American Union is clearly expanding and as this recent Washington Post story called “Six Maps That Will Make You Rethink The World” helps prove, after hitting a few stumbling blocks along the way, it’s back with a vengeance. 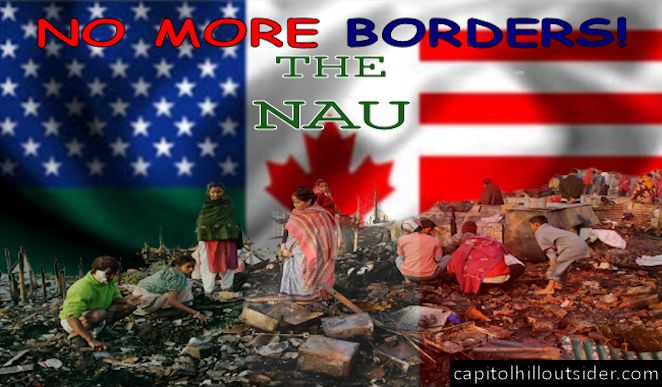 To close from the Rick Wiles interview below and this Z3News story.:

“The hinges of sanity have fallen off the doors of America! Insanity, madness, and murder have entered her doors and gateways. Every unclean spirit will now manifest itself as this nation invites them to inhabit this once sanctified place and people!”

“Up is down and down is up. Wrong is right and right is wrong. America has lost her direction. Her moral compass is broken. She is lost at sea!”

“Civil unrest is upon this nation. Agitators will ignite this fire that will not be put out until the new system is in place.”

“Banking, law and politics will now go south. Not in direction, but in perception. The banking system will implode upon itself.” (The Father made it known to me concerning this statement about Law that He is referring to the Supreme Court laws to come. We haven’t seen anything yet.)

“Politics at both federal and state levels will mirror each other. States will cave into the pressure of the federal government concerning everything from LGBT rights, to the increase in taxation. Though this is already happening, we will soon witness the increase of conservative states caving in to the pressure, because of the threat of federal money being withheld., There will not be a difference between the two; they will operate from the same book. The American people will now realize what has happened to them, but it will be too late.”

“America will now see the rising of the Beast system. It will be too late to stop it for those who become awake during its birthing!” (No amount of revolt will change the course of this System. It will be a crushing system that will not allow dissent to flourish.)

My People must brace themselves for impact! Suddenly things will change! The media will no longer be able to spin the propaganda of false peace, false stability, and false comfort. For the reality of this nations fall is at the door!