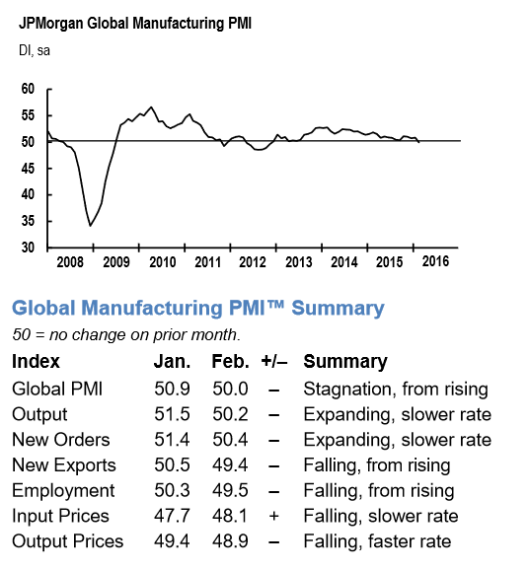 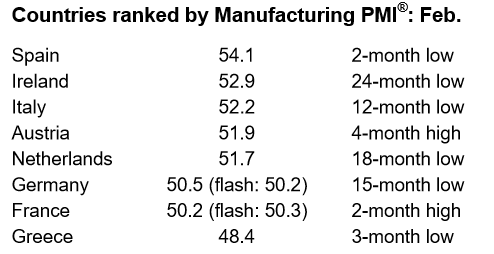 Commenting on the final Markit/BME Germany Manufacturing PMI ®survey data, Oliver Kolodseike, economist at Markit and author of the report said: “It looks as if the German manufacturing engine has run out of steam, with the headline PMI falling to a 15-month low in February. Faced with weak domestic and foreign demand and slow production growth, manufacturers reduced their workforce numbers for the first time in one-and-a-half years. Moreover, with backlogs of work rising at the weakest rate since last July, there is certainly a danger that companies will continue to shed staff in coming months. “Deflationary pressures meanwhile intensified, as low energy and raw material prices led to the steepest drop in input costs since the financial crisis. Although companies were able to reduce their selling prices to the greatest extent since the summer of 2013, demand remained subdued, as highlighted by the smallest gain in new business since last July. “Overall, the data are a serious blow to hopes that any meaningful growth in Germany’s manufacturing sector would resume at the beginning of the year.”

US Weakest Since October 2013 Unlike the ISM diffusion index which has been in contraction for five months, Markit mysteriously has the US economy expanding but at the Weakest Pace Since October 2013. Key Points

The headline index was up fractionally from the earlier ‘flash’ estimate in February (51.0), but this was still the second-lowest reading since October 2012. Moreover, the latest reading pointed to one of the weakest improvements in overall business conditions since the recovery began in late-2009. Subdued export demand also weighed on new business levels in February. The latest survey pointed to the most marked decline in new orders from abroad since April 2015, which manufacturers partly linked to competitive pressures from the strong dollar. February data highlighted a reduction in input prices for the sixth consecutive month. Manufacturers mainly commented on lower steel prices and energy costs. Reduced cost burdens and strong competition for new work in turn resulted in the fastest drop in output charges for over three-and-a-half years.

Markit US Manufacturing I cannot account for the discrepancy between the ISM which has been in contraction for five months and Markit but the trends all point the same direction – lower. For today’s ISM report please see Manufacturing ISM Contracts 5th Month Despite Rise in New Orders. Dismal State of Manufacturing in China  Rounding out the dismal state of global affairs, please consider the Markit CaixinChina General Manufacturing PMI report. Key Points

Commenting on the China General Manufacturing PMI™ data, Dr. He Fan, Chief Economist at Caixin Insight Group said: “The Caixin China General Manufacturing PMI for February is 48, down 0.4 points from the previous month. The index readings for all key categories including output, new orders and employment signalled that conditions worsened, in line with signs that the economy’s road to stability remains bumpy. The government needs to press ahead with reforms, while adopting moderate stimulus policies and strengthening support of the economy in other ways to prevent it from falling off a cliff.”