‘This Is It, We Are Watching The Meltdown’

The FED has lost control and collapse is here. As of Wednesday January 13, 2016 it was reported that nearly 3.2 trillion had been wiped off the global stock market since the start of 2016 and now we see another voice added to the ever-growing list of experts that are telling us “this is it, we are watching the meltdown” happen right before our very eyes. Bill Holter from JS Mineset was interviewed on Friday by SGTReport, informing listeners that this was the first time ever he requested to be interviewed because “The Fed has lied themselves into a corner. They raised rates and here we are a month later, the system is imploding and they have no bullets left. They are going to have to do QE4, they are going to have to do negative interest rates.” Holter continues on to say “I guess the best way to look at where we are right now is, we’re standing at the gates of Hell.” Anyone that thinks Holter is overly dramatic about what is happening right now, needs to understand that by Sunday it was reported that according to Bank of America Merrill Lynch those losses had reached $4 trillion as ThisIsMoney UK offers “truly apocalyptic warnings that stock markets are set to plunge by levels that would wipe out the gains of the past decade – and then some.” (Article continues after the Holter interview) Michael Snyder from The Economic Collapse Blog offers up some sobering facts of what has occurred just this weekend before concluding “this is just the beginning.  What we have seen so far is just the warm up act, and much, much worse is yet to come.” On Sunday, news that Iran plans to dramatically ramp up oil production sent stocks plunging all across the Middle East.  Stocks in Kuwait were down 3.1 percent, stocks in Saudi Arabia plummeted 5.4 percent, and stocks in Qatar experienced a mammoth 7 percent decline.  And of course all of this comes in the context of a much larger long-term decline for Middle Eastern stocks.  At this point, Saudi Arabian stocks are down more than 50 percent from their 2014 highs.  Needless to say, a lot of very wealthy people in Saudi Arabia are getting very nervous.  Could you imagine waking up someday and realizing that more than half of your fortune had been wiped out?  Things aren’t that bad in the U.S. quite yet, but it looks like another rough week could be ahead.  The Dow, the S&P 500 and the Nasdaq are all down at least 12 percent from their 52-week highs, and the Russell 2000 is already in bear market territory. Related: ‘Elite’ Are Preparing For ‘Uprising’ From The Masses – With Global Economy In Full Panic, More Signs They’re Preparing To Move Into Their Underground Bunkers While there is no doubt the “Plunge Protection Team” is working over-time in an attempt to re-assert some control, we see the world markets have  already started the new market week with a drop, with CNBC reporting “Markets in Asia closed mostly lower Monday, on the back of another Wall Street sell-off Friday. Major indexes in Australia and Japan were nearing bear market territory, down over 18 percent from their 52-week closing highs.” BOTTOM LINE The bottom line here is that the Fed and central bankers have lost control, they do not have many, if any more, tricks up their sleeve to manipulate the markets, the economy or control the news about what is coming. Some of the biggest names, banks, investors, trends analysts and other industry insiders have been warning us for years this day would was coming…. “Welcome to tomorrow.” 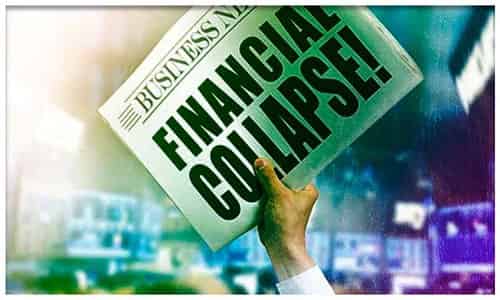