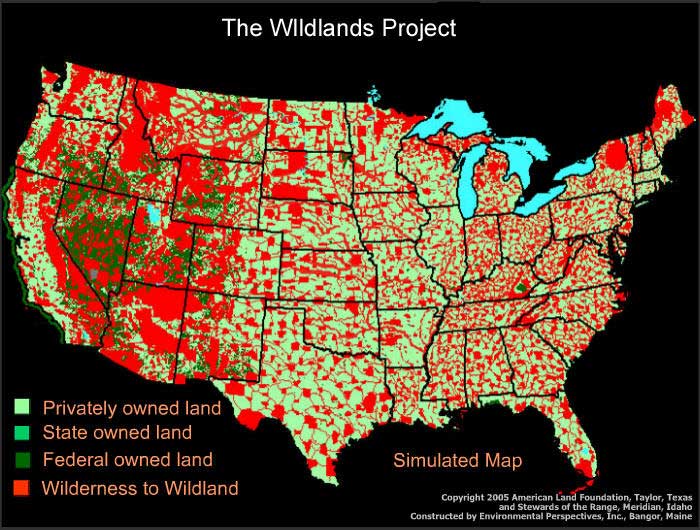 Live Free Or Die While Americans have long thought of ourselves as ‘free’, most of us have noticed those ‘freedoms’ are rapidly being chipped away.Free to choose what jobs we do, who we spend our lives with, what clothes we wear, who we want to be friends with, where we want to go on vacation or for leisure time, what religion we practice and all of the many other facets that make up our daily and extended lives, one choice that Americans have long taken for granted, choosing the location of where we’d like to live, is in grave danger as shared in this story and the 1st video below. Need we be reminded that Americans no longer own much of our country – confiscated as collateral on the national debt. The Wildlands Project at first sounds like an amazing thing to people like Susan and I who prefer to spend our time far away from the cities and the masses of people while loving the wilderness within which we live. We know that many of our readers here at ANP feel the same way, preferring to spend their time with family in the country or in the mountains rather than with the masses. What if, suddenly, you were told that you were no longer allowed to live in the mountains or the country, they were being reclaimed for the Earth, and you had to go live with the rest of the masses in the cities or in the suburbs as the globalists ‘new world order’ agenda goes ‘live’? Human access denied? 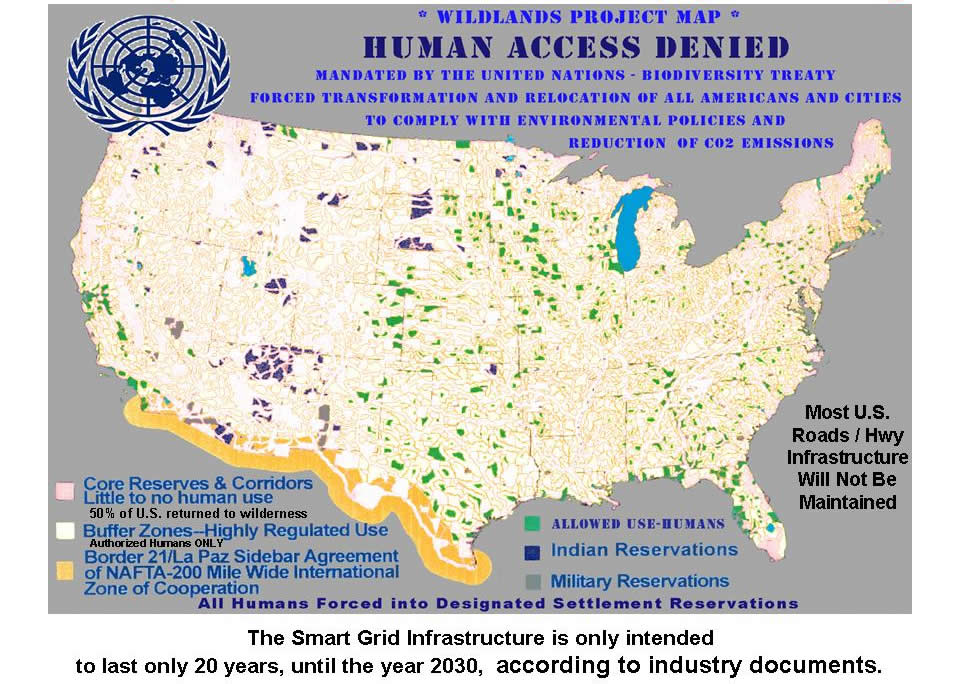 For those of us who love the wild lands of America we live in, we have to be very careful in giving our approval to a project called the ‘Wildlands Project’ no matter how grand it might sound at first for those who love nature for if we don’t pay enough attention, we’ll quickly fall into the same trap so many others have. From Citizens Review Online.: Step by step, piece by piece, the Wildlands Project is coming to fruition. The Project, foundational to the U.N. Biodiversity Treaty which was never ratified by the U.S. Senate, calls for approximately 50 percent of the United States to be set aside as “wildlands”, where no human can enter.   Much has been accomplished over the past 10 years toward that goal, and the pace is stepping up, with the help of the federal agencies under Clinton/Gore. (And so much more since then!) From control of the water – to taking land out of private ownership – to “protecting” numerous species – all the pieces of the puzzle work together to form the complete picture.  People remain unaware of the size and scope of the operation because land is being taken in the name of “endangered species”. 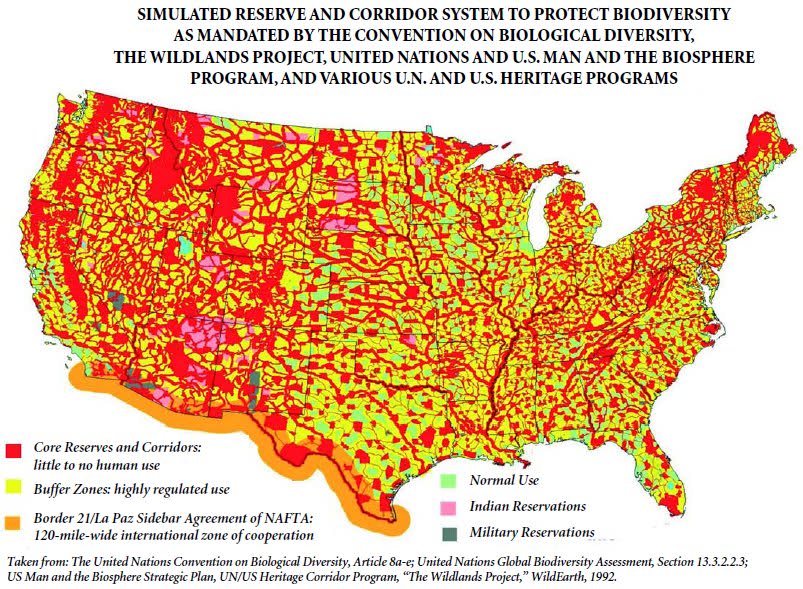 While many might think the govt controlling where people can or cannot live could never happen in a ‘free’ country, the recent story that has captured the attention of the entire country, Hammond’s Ranch in Oregon, has within its deep roots this very issue. With Undrtaker having taken a look at the Hammond Ranch story from several different angles in this excellent story on ANP, we see that Hammond Ranch, like Bundy Ranch before it, has the ‘Wildlands Project’ and Agenda 21 as part of the heart of the matter and the slowly eroding land ownership of Americans in the West compared to the federal government’s rapidly growing land ownership. As has been pointed out before, the staggering percentage of land owned by the federal government in the west compared to the east is absolutely mindblowing and shows a country largely already ‘taken over’ compared to the relatively small percentages seen in government land ownership in the east as seen in the graphic below. 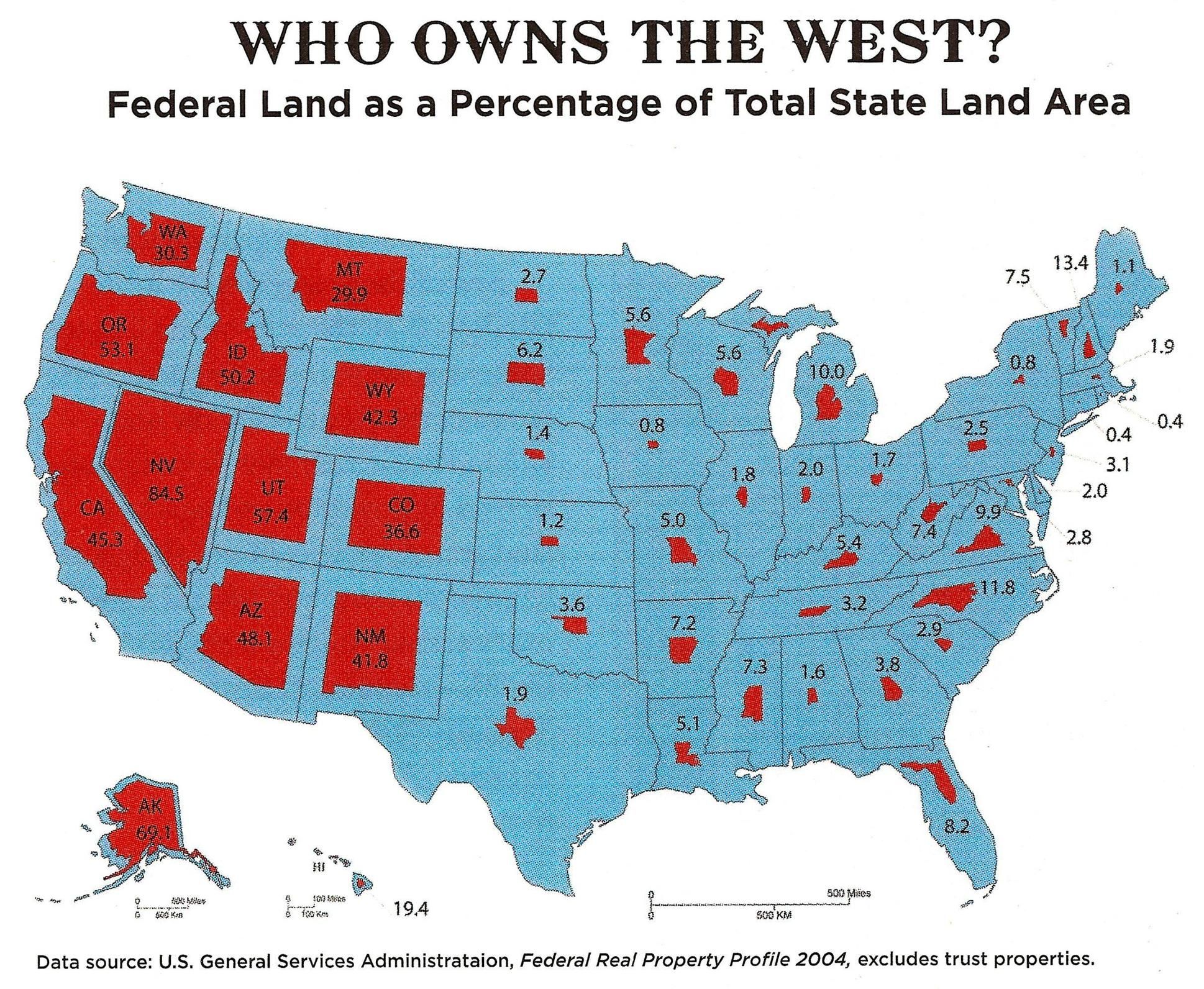 For those who may not know, what exactly is Agenda 21? A program largely originating from the United Nations, there’s a very good reason why most American’s don’t know about Agenda 21 because our mainstream media isn’t speaking about it. If our mainstream media isn’t talking about it, we generally immediately want to know why and begin digging into whatever issue it is that they are censoring. Agenda 21 is a huge issue, and it impacts EVERYBODY living in this country. We get an excellent breakdown of Agenda 21 in 3 paragraphs from Liberty Sentinel.: A decades-old scheme to eliminate private ownership of land has been working quietly to snatch up thousands of acres in North-Central Florida and across the nation under the guise of environmental protection. The plan, formally known as “Agenda 21,” was originally outlined in a 1976 United Nations report called ‘Habitat I.’

United States and Florida law enshrine the protection of life, liberty, and property, but the U.N. condemns private property and goes on to state that “public control of land use” is “indispensable.” Private land ownership, according to Habitat I, contributes to “social injustice.”

The two ideologies are irreconcilable, but Agenda 21 marches on with the support of the U.S. government and even state and local governments. “Agenda 21 is a comprehensive plan of action to be taken globally, nationally and locally by organizations of the United Nations System, Governments, and Major Groups in every area in which human impacts on the environment,” the U.N. Department of Economic and Social Affairs explains on its Web site.

While Exposing the Truth tells us that many times, activists mistake the Wildlands Project map for Agenda 21, we see they are largely related, both UN programs tied to the future of land usage in America and the reclamation of land for animals and Earth. This PDF tells us how to recognize Agenda 21 within our own communities. Do we really want or need our public servants controlling this much land in America? With their control comes our lack thereof. That is something that everyone needs to remember, and that is why we are here at this point in time now, slaves to our own servants and to a broken system preparing to further enslave us. 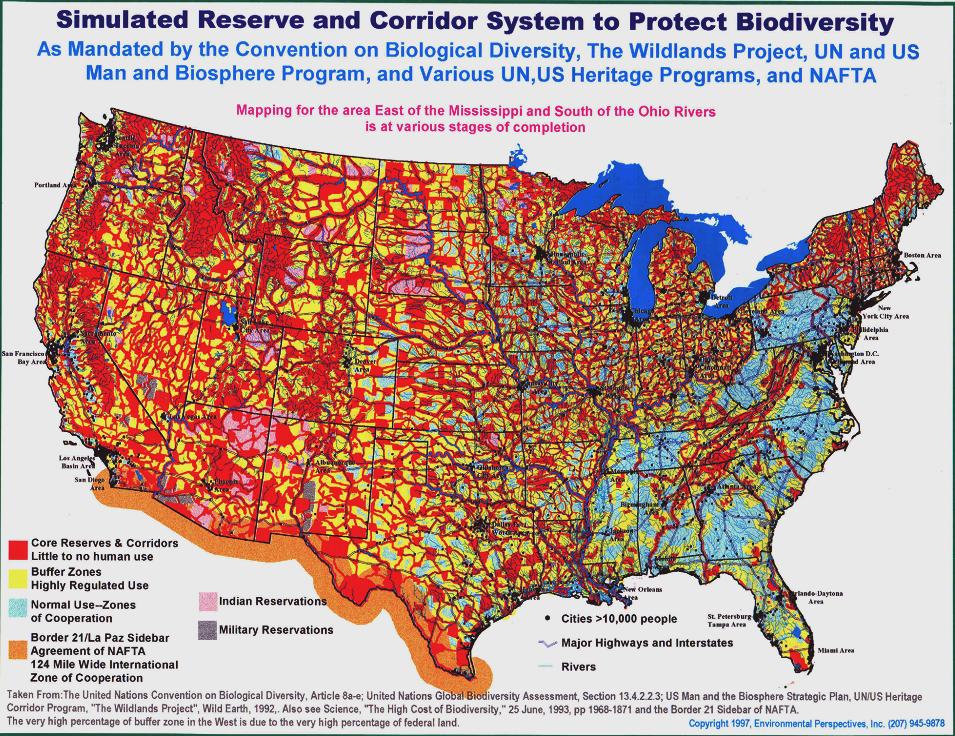