‘Be Ready’ – ‘Enough Is Enough’ – ‘It Is On Its Way’ – One By One Law Enforcement Officials Are Standing Up And Speaking Out ‘Arm Yourselves Now!’

One by one law enforcement is standing up and speaking out against Obama and gun control, telling their citizens straight out to “arm themselves” and to be prepared, with the latest example being a Police Chief from Texas who takes it a step further speaking directly at Barack Obama and telling him that trying to disarm Americans would “cause a revolution in this country.” As Congress prepares to vote on a bill that would make it easier for Mulsim refugees (and terrorists!) to be imported into the U.S., which would “burden the U.S. immigration system and prevent authorities from normal background checks meant to ensure individuals are not tied to terrorists or other type of criminal enterprises,” we are facing danger not just from radical ideologists invading America, but an unprecedented danger from the President of the United States that is importing them while at the same time pushing for “gun control”  against Americans. As an ISIS leader declares “Islam is the religion of war,” it becomes critical that law enforcement officers, police chiefs, sheriffs, street cops, etc… continue to counter the words of “politicans.” It is worth noting, the “gun control” Obama is fighting for are the same laws already on the books in California, but which did nothing to stop the San Bernardino massacre, which killed 14 and injured up to 20 others. Randy Kennedy, longtime chief in the small East Texas town of Hughes Springs, about 120 miles east of Dallas, says in the video posted this week on his personal Facebook page that the Second Amendment was established to protect people from criminals and “terrorists and radical ideology.” “It’s also there to protect us against a government that has overreached its power,” Kennedy says in the video. “You are not our potentate, sir. You are our servant.” He warned people in his town to prepare themselves: “Be ready when the wolf comes to the door, because it’s on its way.” On December 7, 2015, another law enforcement official posted a video that has gone viral, Brevard County Sheriff Wayne Ivey, states “Enough is Enough, as he also took to Facebook stating “IT’S TIME TO SAY WHAT NEEDS TO BE SAID TO PROTECT OUR CITIZENS!!” Ivey explains that in an active shooter situation, no matter how fast the police response time, by the time they arrive on the scene it is often too late because it only takes seconds to kill the victims and that “The only thing that stops a bad guy with a gun is a good guy with a gun.” “If you’re a person who is legally licensed to carry a firearm, now is the time to realize that you, and you alone, may be the first line of defense for you, your family

and others around you in a terrorist or active shooter scenario,” said Ivey. Another is Lee County, Florida Sheriff Mike Scott, who went on to the Department’s Facebook page and explained the “Fallacies of Gun Control,” where he stated in part  that “the good guys (and gals) and their right to legally own and possess firearms,” are “likely going to be the first responder,” in an attack. Law enforcement at large does a remarkable job in the face of unprecedented challenges and a growing trend of being vilified in whole for the rare misdeeds of an occasional bad actor. Still, we can’t be with everyone at all times and most of the citizens we serve do not have Secret Service protection around the clock like our President who touts gun control as the remedy for the myriad of real threats that face us. I doubt he would condone those that guard him and his family being disarmed or demilitarized, and I believe our citizenry deserves no less in protecting itself. The criminally insane, the violent offenders, and the mounting number of terrorists within our borders do not give a damn about gun laws or gun free zones and make no mistake, they will always have guns. Few will dispute that the only way to stop a bad guy with a gun is a good guy with a gun. I salute the good guys (and gals) and their right to legally own and possess firearms, be they for sport and peaceful purposes or for self defense…after all, they are likely going to be the first responder! On December 3, 2015, Ulster County, New York Sheriff Paul J. Van Blarcum, took to the Department’s social media page with a message to all licensed handgun owners, which stated the following: In light of recent events that have occurred in the United States and around the world I want to encourage citizens of Ulster County who are licensed to carry a firearm to PLEASE DO SO. I urge you to responsibly take advantage of your legal right to carry a firearm. To ensure the safety of yourself and others, make sure you are comfortable and proficient with your weapon, and knowledgeable of the laws in New York State with regards to carrying a weapon and when it is legal to use it. I also want to remind all Police/Peace Officers both active duty and retired to please carry a weapon whenever you leave your house. We are the thin blue line that is entrusted in keeping this country safe, and we must be prepared to act at any given moment. Thank you, Paul J. Van BlarcumUlster County Sheriff On December 1, 2015, Detroit Police Chief James Craig indicated that “Armed Citizens Deter Terrorist Attacks In Detroit,” stating “If you’re a terrorist, or a carjacker, you want unarmed citizen.” Before the San Bernardino attacks, D.C. Police Chief Cathy L. Lanier stated in a “60 Minutes” interview  “Your options are run, hide or fight. I always say if you can get out, getting out’s your first option, your best option. If you’re in a position to try and take the gunman down, to take the gunman out, it’s the best option for saving lives before police can get there.” The importance of these brave law enforcement officials speaking out cannot be overstated. First it shows exactly what side of the line they will be standing on when Obama attempts to disarm Americans, which will be the side of the people, not the government bureaucrats, but more importantly, it shows the difference in the thought processes between politicians that receive armed protection while at the same time declaring that citizens shouldn’t be able to defend themselves, and the men and women out on the streets, that face violence each and every day and making it clear they want and need a legally  armed citizenry. In their declaration, they have drawn a bright red line, making it abundantly clear that not only will they stand with Americans in protecting themselves against terrorists, but they will also stand with them  as protection against an overreaching and increasingly tyrannical government. If anyone has seen their local law enforcement stand up against the gun grabbing politicians led by Barack Obama, please let us know in the comment section… if there is a link, a social media post or a video, we will add them as updates. 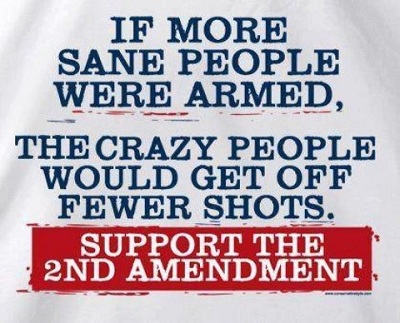