Obama Is The Greatest Gun Salesman Of All Time: “There Were Two Background Checks Every Second On Black Friday” 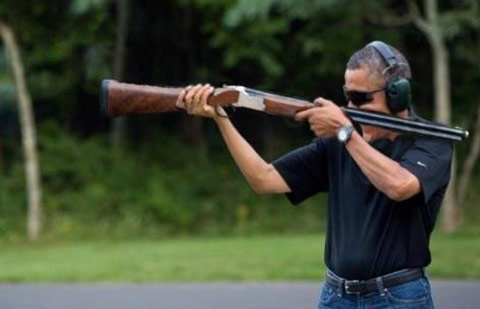 (Image Source: AR15.com) While most Americans who braved the annual Running of the Sheep celebration were stocking up on discounted veggie steamers and last year’s flat screen TV models, those who understand the threats to liberty and personal safety chose to spend their hard earned wages on personal protection. According to the Federal Bureau of Investigation sales of firearms on Black Friday broke a new record. The agency processed 185,345 background checks, or roughly two per second. The previous record was set shortly after the Sandy Hook shooting in 2012 when President Obama and numerous anti-gun Senators proposed widespread bans and restrictions on “weapons of war,” prompting literal lines out the door from Americans fearing government driven confiscation initiatives.

Black Friday shoppers sought to buy a record number of guns on the nation’s biggest retail holiday — about two every second — eclipsing a previous record set in the days after the Sandy Hook massacre. The FBI processed a terrifying 185,345 firearms background checks — the most ever on a single day — on Black Friday, the agency said Tuesday. While a background check does not mean a gun was purchased, the mandatory National Instant Criminal Background Check System checks are seen as the best measure for U.S. gun sales. (NY Daily News)

Mainline news outlets like USA Today, the New York Daily, and the Huffington Postmade it a point to note that on the very day 185,345 Americans across the country were purchasing firearms a crazed individual killed three people and injured nine at a Planned Parenthood abortion clinic. President Obama, who saw over 10,000,000 guns sold ahead of the 2012 Presidential election, weighed in after the shooting.

“Enough is enough,” Obama said in a statement on Saturday. He said the Planned Parenthood shootings showed the need to “to do something about the easy accessibility of weapons of war” for “people who have no business wielding them.” (Huff Post)

We assume he is referring to the millions of Americans who wield these weapons of war after being subjected to unconstitutional background check violations, attending multi-hour safety courses, studying their legal responsibilities in safe defense situations, and spending hundreds of hours at the shooting range ensuring they don’t kill innocent bystanders should they ever be forced to draw their weapons. He couldn’t possibly be referring to people in positions of power who have initiated drone strikes that kill 90% civilians and control our nuclear strike codes, though they have never served in the United States Armed Forces, never held a private sector job, served as a state Senator for just two years with the only accomplishment to their name being a Harvard education for which no official records exist before becoming the highest elected official in the land.