The Coming Great Recession, Brought to You by the Healthcare Cartel

by Charles Hugh Smith, Washington’s Blog Why the coming Great Recession is brought to you by the Healthcare Cartel is painfully simple: in an era of stagnant household incomes, every additional dollar devoted to rising healthcare insurance, outrageously unaffordable medications and soaring co-pays is one less dollar that’s available to be saved, invested or spent on something other than healthcare. Recent headlines tell the story: off-patent medications suddenly leap in price, healthcare premiums jump 25+% in a single year, co-pays increase and the deductibles on many insurance plans are so high that the coverage is more phantom than real: if you have to spend $5,000 before your insurance plan pays $1, what value is the coverage? If the plan costs $5,000 a year, but doesn’t pay a dime of expenses until you’ve spent $5,000, then the plan actually costs $10,000. No wonder rising healthcare costs are tightly correlated with recessions, as longtime correspondent B.C.’s chart reveals: as healthcare expenses consume more oxygen, the rest of the economy starts gasping for air: 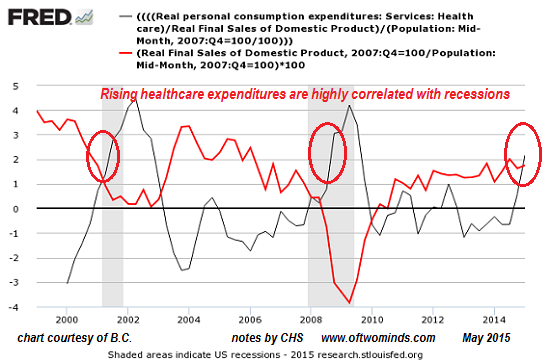 Adjusted for inflation, healthcare expenditures have risen 55% since 2000: 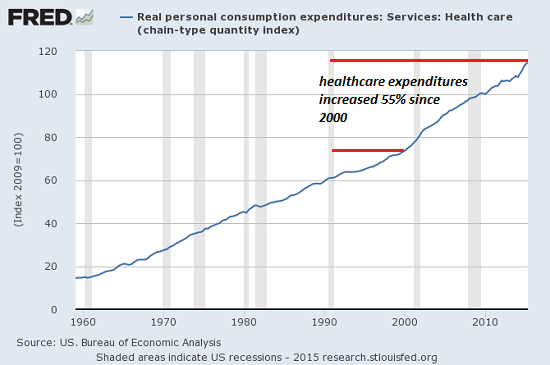 Compared to our developed-nation competitors, the U.S. spends an inordinate amount of healthcare spending on the elderly. Why? because it’s so profitable, and the federal government pays the bills, no questions asked–even when the billing is fraudulent or inflated, or the medications and procedures are needless or even harmful. 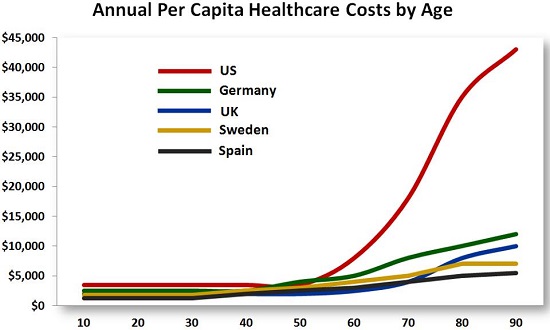 So what happens when an insatiable state-mandated cartel attaches itself to households with declining real incomes? 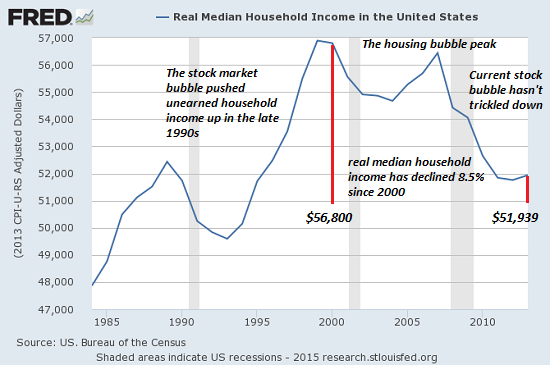 There is less money to spend in the rest of the economy, which stumbles into recession.