14 Things To Do Before World War III Begins 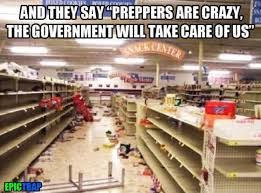 Yesterday, The Common Sense Show issued a breaking news alert as to the elite bugging out to deep underground bunkers in Morocco. The Common Sense Show is announcing that we have even more details have surfaced regarding to Moroccan bugging out indicating that World War III is imminent. If such an event ever came to fruition, it could potentially paralyze this nation and bring the economy to a standstill. Subsequently, the grocery store shelves could be empty within two days and food riots would likely commence by sundown of the second day. All Americans would instantly be in danger. Local law enforcement would be overwhelmed. What would be your chances of survival? Previously, I wrote about the fact that FEMA has conducted research studies on America’s level of preparedness and the news is not good. FEMA concluded that 72% of all Americans are not prepared to survive what is coming In other words, when society begins to fragment, you and your fellow preppers are outnumbered by a 3 to 1 margin.

Initial Inquiry Regarding Generators for DUMB

Below is the initial inquiry from the South Korean Corporation which was looking for 5000 generators for deep underground bunkers. The details regarding the request surfaced in later communications. Tim Moeller, the owner of of Moeller engineering, request that our mutual contact, Bob Griswold forward these communicatis to me (DH).

M/S: Moeller Engineering
From: YJ Kim (Mobile: +82-10-3865-8456. e-mail:[email protected])
Vice-president, Specialist consultant for renewable energy section
Dear Sir,
You company and web-site introduced by Korea trade Center and we have seen detail all your items on sale through your web-site. We are Korean company and doing renewable energy and water treatment business. Now we are having some ODA(Official Development Assistance) project with NGO and the Ministry of Foreign Korean Government that we are plan to have 2014’ ODA project for supporting to Africa 54 countries, According to their requirements, we are going to provide “Hand Crank Generator for all weather”
What we are looking for is ‘Hand Crank Generator“ and specification and quality guarantee condition as follows and hope your items will be suitable for this condition. If not available to fit this specification, your best counter offer will be appreciated.
And also, we are very interested to be your Sole agent in Korea if you are looking for best agent in Korea. Please let me know what is your sole agent policy.
Our company profile
Company Name*: AK International Co., Ltd.
Country: Head office in Korea,
Main Contact Name & Title*: YJ Kim/Vice-president
Company Website: www.ak-int.co.kr
Awaiting for your prompt reply soon.
With best regards,
YJ Kim

As I reported yesterday, the proverbial poop is ready to hit the fan. The Russians are on the verge of taking over Syria. The overlords of the Petrodollar are never going to let that happen. Jade Helm forces are in place. The elite are bugging out. Owners of deep underground bunkers are frantically seeking generators. All hell is ready to break loose. Are you prepared for 3 out of 4 of your neighbors climbing through your windows in search of life-saving supplies? If the elite are bugging out, shouldn’t you be preparing for the worst?

In response to concerns about strengthening the nation’s ability to protect its population and way of life (i.e., security) and ability to adapt and recover from emergencies (i.e., resilience), the President of the United States issued Presidential Policy Directive 8: National Preparedness(PPD-8). PPD-8 is a directive for the Department of Homeland Security to coordinate a comprehensive campaign to encourage Americans to practice national preparedness. Despite efforts byFEMA and other organizations to educate American citizens on becoming prepared, growth in specific preparedness behaviors has been limited. Government programs to this end are nearly nonexistent. I have spent the past week illustrating how a coming economic collapse is unavoidable and how the elite have conspired to steal as many of your assets as possible prior to the collapse. This article presents  some common sense things one can do which could increase the chances of surviving a major societal meltdown resulting from an economic collapse. If you have any doubts as to what is coming, I strongly encourage you to read what I have written about on this topic over the past several months. Even Ray Charles could see that our economy will  not be around much longer in its present form. Your can read these storieshere, here, here, here, here, here, here, here, here, here and here, It is always best to prepare for the worst and hope for the best. For the purposes of this article, it is possible that society will not totally collapse even if the dollar does. However, large segments of societies always collapse when an economic collapse happens.  Surviving the worst case scenario is the purpose behind what will be covered here.

1. The Creation of a FAKE-Identity

It may be necessary to become invisible in the event you think you believe that your name could be on a (Red) list because roundups will usually occur in dire situations. Therefore, the creation of a pseudo-identity could become very important.

2. It Takes Money to Prepare

If you have read the articles at the above links, you should have concluded that it is the height of stupidity to leave your life savings in an institution that is planning to steal from you. You need to divert your cash, other than the ability to pay basic bills, in preparation for what is coming.

Getting your money out of the bank has become an art form and you need to be careful. There is a barrier to your ability to procure some of these life-saving and life-extending supplies. Right now, you do not have full access to your money. As you move to withdraw the bulk of your money, there are three federal banking laws that you should be cognizant of, namely, Cash Transaction Report (CTR), a Suspicious Activity Report (SAR) and structuring.

Federal law requires that the bank file a report based upon any withdrawal or deposit of $10,000 or more on any single given day.The law was designed to put a damper on money laundering, sophisticated counterfeiting and other federal crimes. To remain in compliance with the law, financial institutions must obtain personal identification, information about the transaction and the social security number of the person conducting the transaction. Before proceeding with the planned withdrawal of your money, I would strongly suggest that you read the following federal guidelines as it relates to CTR’s as produced by the The Financial Crimes Enforcement Network (FinCEN). All the federal regulations contained in this article are elucidated in this series of federal reports.

There will undoubtedly be some geniuses whose math ability will tell them that all they have to do is to withdraw $9,999.99 and the bank and its protector, the federal government will be none the wiser. It is not quite that simple. The bank is required to file a Suspicious Activity Report (SAR) which serves to notify the federal government of an individual’s attempt to structure deposits or withdrawals by circumventing the $10,000 reporting requirement. Structuring transactions to prevent a CTR from being reported can result in imprisonment for not more than five years and/or a fine of up to $250,000. If structuring involves more than $100,000 in a twelve month period or is performed while violating another law of the federal government, the penalty is doubled.

Much like the enforcement of our tax laws, the federal government’s enforcement of its banking laws as it relates to CTR’s, SAR’s and subsequent structuring is quite draconian. Civilian asset forfeiture laws come into play. The government can seize your bank accounts while it determines if a crime has been committed. The government can literally seize your assets in perpetuity without an order of the court. Of course, you could try and sue but you will be up against the deep pockets of the federal government and the case could take years. By the time your case is decided, the financial banking crisis that you are so desperately trying to avoid by withdrawing your money, could be over.  So, proceed with caution.

Withdrawing Your Money From the Bank

The best way to avoid getting your money caught in the bank in the midst of a bank run would be to not let the lion’s share of your money ever cross the bank. The simplest way to accomplish this is to prevent any form of deposit from going automatically into your account, as much as it is possible. Secondly, you need to begin to pay cash for everything. Let’s say that every 30 days, Bob cashes his check at the bank from his work worth $5,000 net pay. Bob leaves just enough in the bank to be able to conduct normal banking business. Bob walks out of the bank every month with the majority of the cash from his check. Bob should begin to pay cash for as much as he can, such as eating out, paying the electric bill (pay the bill in person), buying groceries, etc. When it becomes necessary to make a “big ticket” purchase, Bob could temporarily leave more in the bank to cover the writing of a check. You would also be wise to open multiple banking accounts ranging from the big five megabanks to your local credit unions. You could withdraw much smaller amounts until the sum total of your accounts is greatly diminished and is in your possession. To open the accounts, simply write a personal check from your home bank. Of course, in these cases, the bank could hold the check for 15-30 days. I cannot promise you that if you become the target of federal investigators, that you will not have your every financial move scrutinized and the feds will eventually discover the aggregate patterns of withdrawal. People who I interviewed told me that they believe that the federal government is in the process of getting the banking computers to “talk” to each other in a way that would reveal structuring, but that technology is not yet online.