by Case Adams, Green Med Info You might like the spicy taste of cloves in your meal. But cloves have a deeper side: Preclinical research reveals their ability to halt the growth of a number of types of cancers. So you like the taste of cloves as a spice? Turns out that cloves run deeper than taste. Quite simply, cloves are dried flower buds from a plant scientifically called Syzygium aromaticum L. Cloves have been used for centuries in several traditional medicines, including Ayurveda and Traditional Chinese Medicine. They have also been used in Indonesian, Thai and Kampo medicine of Japan for centuries. This means that cloves have been clinically used as a medicine on billions of people for thousands of years. Cloves have been used for numerous types of infections, including those caused by bacteria, viruses and fungi. They also have a way of deadening pain, which is why they are often used for relieving teeth infections. Traditional therapies have used cloves for gastrointestinal disorders, disorders of the kidneys and spleen, and for pain. But because cancers are more of a modern disease, the use of medicinal herbs such as cloves has been overlooked as anticancer agents. Nonetheless, over a third of today’s anticancer agents are in fact based upon plant-derived pharmaceuticals. As it turns out, cloves are not simply antibacterial, antifungal, antiviral and carminative: Cloves are also potent anticancer agents. 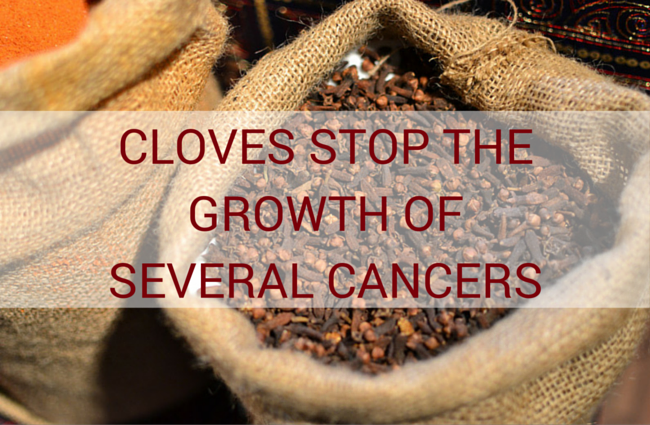 The extract that proved the most efficacious was an ethanol extract. This means basically that the cloves were soaked in alcohol and the resulting solution was used (don’t self-medicate – talk to your doctor). More specifically, the cloves were soaked in 95% alcohol for 72 hours at room temperature. The whole extract was then concentrated. The extracting process had the effect of releasing the medicinal compounds from cloves that may or may not be released when they are eaten. This is a common method used by herbalists for centuries. Today these are called tinctures. Cloves have many different medicinal compounds. Some have been isolated while others have not. Those that have been isolated and identified include eugenol, β-caryophyllene, humulene, chavicol, methyl salicylate, α-ylangene, eugenone, eugenin, rhamnetin, kaempferol, eugenitin, oleanolic acid, stigmasterol, campesterol and others. The variety of these compounds have been categorized as sesquiterpenes, flavonoids, triterpenoids and others. This whole array of compounds within natural herbs provides the basis for the safety of many medicinal herbs. When compounds are isolated and prescribed without nature’s blend of other constituents, the medicine often produces side effects. These other compounds provide a buffering effect. That said, the two compounds that the researchers found provided critical anticancer potency were oleanolic acid and eugenol. The former is a triterpenic acid.

Case Adams is a California Naturopath who is board-certified by the American Alternative Medical Association as an Alternative Medical Practitioner, with a Ph.D. in Natural Health Sciences and a degree in Naturopathy. He is a traditional naturopath – not a licensed physician. His focus is upon researching, writing about and authenticating traditional therapies with clinical evidence. He is the author of 25 books on natural health. His books can be found on Heal Naturally – and many are available for immediate download on GreenMedinfo’s book library. Contact Case at [email protected]
Disclaimer: This article is not intended to provide medical advice, diagnosis or treatment. Views expressed here do not necessarily reflect those of GreenMedInfo or its staff.
Disqus commenting is available to everyone.