Jeez. What ever happened to the ‘free world’??

by Simon Black, Sovereign Man On August 12, 1961, Walter Ulbricht, the Chairman of the State Council in East Germany, signed an order to close the border and begin building a wall around East Berlin. It happened quickly. Soldiers began tearing up the roads leading into West Berlin almost immediately and actually stood with weapons at the border with orders to shoot anyone who tried to cross. 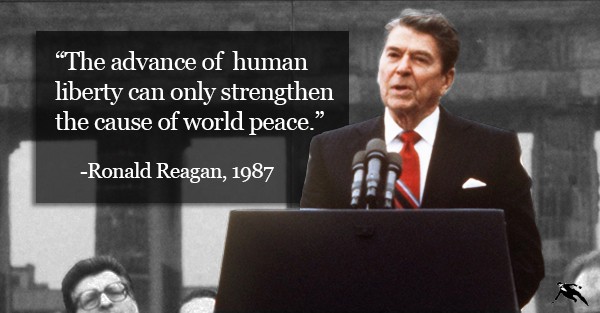 Before long there were barbed-wire fences. Then concrete walls. Then dogs. Guard towers. And even anti-tank obstacles. Of course, the East German government told people that the wall was for their protection, ostensibly to keep out rapists and thieves. They said that there were too many foreigners coming in to East Berlin who unfairly bought up state-subsidized goods. They also warned people of the looming threat of fascist invaders, and even went as far as to call the wall an “Anti-fascist protective rampart”. As a child of the ’80s (I was born at the tail-end of the Carter administration), I remember how the Berlin Wall was a symbol of tyranny and oppression. And from the steps of the Brandenburg Gate in West Berlin, Ronald Reagan told the world in a now-famous speech from 1987, “The advance of human liberty can only strengthen the cause of world peace,” before demanding, “Mr. Gorbachev, tear down this wall!” Back then if you had talked about building a wall in America, they would have called you a Commie. But now, in the Land of the Free, it’s all the rage to build a new wall. They’re also talking about rounding up Muslims and having ‘databases’ just in case you have the audacity to be brown. There’s already a massive level of surveillance in the Land of the Free. Everything you do online is monitored and tracked. The police state grows by the day. Federally-funded police forces now don combat boots, Kevlar vests, and intimidating paramilitary attire to drive around in their urban assault vehicles as if they’re in downtown Mogadishu. Nearly every federal agency down to the Fish and Wildlife Service has its own gun-toting police force… which makes it pretty unsurprising that Civil Asset Forfeiture has risen an average of 21% per year for the past two decades. Yet despite all of this security and surveillance, the government still doesn’t feel that it’s enough. The US State Department released an alert this week telling American citizens to avoid travel and public places… for the next THREE MONTHS. Apparently we should all be cowering in fear in our homes, grateful that the NSA is reading our emails. The Department of Homeland Security is bringing back “if you see something, say something” in the hopes of having the citizens all rat each other out. Former CIA Director Jack Devine stated “I have never felt more uncomfortable than I do today,” and that today “is the most dangerous time ever.” Someone needs to give this man a history lesson. Human civilization has had to deal with deranged threats for thousands of years. Yes, there are some nut jobs out there—crazed, lone wolf gunmen, angry teenagers, and even terrorists with an agenda, all of whom intend to do harm to innocents. But having traveled to nearly 120 countries on all seven continents, I can tell you from personal experience that the world is actually a pretty safe place. Today I can hop on a plane and be on the other side of the planet tomorrow morning, even in a country where I don’t know a soul. You couldn’t do that 500 years ago. You couldn’t even really do it 100 years ago. Centuries ago, even moving outside your own village was fraught with risk and peril. So the time we’re living in today is actually one of the safest in the history of the world. The far greater danger out there, more than angry teenagers and men in caves, is the palatable, distinct decline in freedom. I don’t know where the ‘Land of the Free’ went… or where the ‘leader of the free world’ ran off… But this is a far cry from those days in the ’80s when Western nations stood against tyranny and fear. If you celebrate Thanksgiving, I’d encourage you to give thanks that you can see the truth. Give thanks that you’re rational and aren’t giving in to the propaganda. But most of all, give thanks that, even though you may not be free right now, all the solutions exist to ensure that you can be once again. Our goal is simple: To help you achieve personal liberty and financial prosperity no matter what happens. Multiple times every week, we help over 100,000 Sovereign Man subscribers who are taking their family’s liberty and prosperity into their own hands with our free publication, Notes From The Field. Activate your free subscription today, and get fresh intelligence delivered securely to your inbox as we travel the world discovering the biggest opportunities available to smart, enterprising individuals like you.