How to Escape a Totalitarian Detention Camp

TDC Note – First, get a passport. Second, pick a country that is not the U.S. and move there. by Jeremiah Johnson, Ready Nutrition 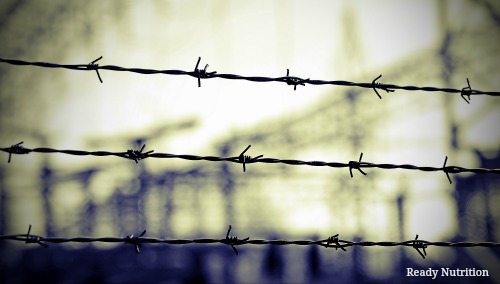 Good Day, ReadyNutrition Readers, and as I promised, here is the follow-up to the article on how to deal with being a prisoner of a foreign army or a tyrannical regime.  That being mentioned, this article is for informational purposes only and does not recommend or advise taking any actions that could or would violate any existing laws. In that vein, this is for when the U.S. has been invaded and you’ve been rounded up, or the country has gone “full-blown” communist-totalitarian and you’ve been taken to the Bill Ayers and Bernardine Dohrn Community Reeducation Center and Fertilizer Plant.  Drastic times call for drastic measures, and if you are not mentally prepared to take action in the face of Draconian measures of oppression to stand up for yourself and your family, then this article is a wakeup call. Remember that in both of the above-mentioned cases, you will not have any rights under the Geneva and Hague Conventions.  When you are taken by the Chinese or by the “U.S. Neighborhood Peacekeeping Force,” you will not be afforded the same rights as a prisoner of war in uniform.  You will be labeled a criminal and will be treated very poorly. Your best examples as such are found readily in history. Study the following military operations to gain a better understanding of what you are looking at.

All of these are perfect examples of a repressive, totalitarian regime taking out its hatred and frustrations on an unarmed populace.  Watch the first “Red Dawn” movie.  In the first half hour, a Cuban colonel directs his Russian subordinate to enter the sporting goods stores and obtain the lists of private ownership of firearms.  Think you for a minute that such will not occur?  It has in the past, and it will again.  Now you’re in the tank, and they have you.  What is done for starters?             You must find out the capacity they intend to keep you within: forced labor, political “reeducation,” strategic or professional value, or are you going to your death. Readers, I’m serious, here.  I have seen the results of the Guatemalan death squads and the atrocities visited upon civilians.  I have seen it from both sides (Serbs and Croats) upon the opposing side’s civilian populaces.  They round the ones up who are educated, the ones who are the potential troublemakers, and anyone who falls into their “threat” category. Assess their intentions for you.  The first place you go to is a short-term detention facility that may be no more than a tent with a few benches, prisoners in handcuffs, and guards all around.  The initial holding is not as high security as the “formal/permanent” facility that you will go to.  The initial holding compound is usually easier to escape, if you are not a high-profile individual.  You must train yourself to observe the following that will help you make your break:

These items to observe hold true for the larger camp that you will be sent to.  The only difference is that you do not have a great deal of time to observe these things, as you are in a short-term holding facility.  Here is a key point for you to remember: You must find “space/unguarded time” in order to effectively slip away or escape. How often do the guards check on you at night?  Is there a continuous guard presence?  If so, how “strack” (gung-ho) is the guard?  Can you win sympathy and potential support?  If not, can you overpower the guard? Once again, we are not “playing” survival-guy/survival-girl here.  The following skills (with videos included) se are real world, real time considerations that you have to have as a mental framework before you go in.  There are skills you need to know prior to your “visit” to the Weather Underground Community Holding Facility, and here they are: Hotwiring a vehicle: standard is 1 minute; if you can obtain the key, all the better. Lock picking: you should be able to pick simple tumblers and padlocks; standard for cuffs with a paper clip is 5 minutes. Climbing: you need to practice scaling/descending a brick wall with a minimum of climbing gear; practice by making a rope out of a bedsheet, and one out of a blanket. Weapons: virtually anything can be turned into a weapon.  Study these methods, and practice them beforehand.  Learn to take a piece of steel and sharpen it into a knife, into a shank, using the rough surface of a concrete curb.  Learn to make “knuckles” out of coins/metal, and duct tape/clothing strips.  Practice makes perfect; perfect makes escape possible. You take out a guard?  Remember in the previous article where I mentioned learning some of the language of the potential invaders?  Watch the film, “Midnight Express,” a true story of William Hayes who escaped from a Turkish prison.  He “appropriated” a guard’s uniform and with a smattering of Turkish walked out of the front door of the prison! You have to learn to “hustle.”  Nobody will care about who you are or what you were in civilian life on the outside.  These are harsh realities of life under military occupation or under the rule of a totalitarian dictatorship when you are a prisoner.  The rights you once had and we collectively took for granted?  You no longer have them.  It is (Jack London) now “the law of club and fang,” and you need to use every skill, every asset, and every trick in your repertoire to win on this one. You just went in, and they’re filling out your paperwork to send you to the big Gulag…the one in the compound that used to be your neighborhood Wal-Mart.  You are no longer John Smith or Jane Adams.  You are now Criminal # 23456-A, with a number on your back and pants leg, and no shoes or socks.  Alright, there was no time to do anything to escape the holding facility.  You’re on your way to the big house. The next installment of this series is going to tell you how to get out of there, down and dirty, straight up without any water or ice.  In the meantime, read all that you can on POW’s and political prisoners interred under dictatorships.  Now is the time to prepare your mind.  We gave you a taste of the gravy; the “meat and potatoes” will follow.  Have a good day, and do good things…well!’ JJ ####

Jeremiah Johnson is the Nom de plume of a retired Green Beret of the United States Army Special Forces (Airborne). Mr. Johnson was a Special Forces Medic, EMT and ACLS-certified, with comprehensive training in wilderness survival, rescue, and patient-extraction. He is a Certified Master Herbalist and a graduate of the Global College of Natural Medicine of Santa Ana, CA. A graduate of the U.S. Army’s survival course of SERE school (Survival Evasion Resistance Escape), Mr. Johnson also successfully completed the Montana Master Food Preserver Course for home-canning, smoking, and dehydrating foods.
Mr. Johnson dries and tinctures a wide variety of medicinal herbs taken by wild crafting and cultivation, in addition to preserving and canning his own food. An expert in land navigation, survival, mountaineering, and parachuting as trained by the United States Army, Mr. Johnson is an ardent advocate for preparedness, self-sufficiency, and long-term disaster sustainability for families. He and his wife survived Hurricane Katrina and its aftermath. Cross-trained as a Special Forces Engineer, he is an expert in supply, logistics, transport, and long-term storage of perishable materials, having incorporated many of these techniques plus some unique innovations in his own homestead. Mr. Johnson brings practical, tested experience firmly rooted in formal education to his writings and to our team. He and his wife live in a cabin in the mountains of Western Montana with their three cats.