A TEN-RING CIRCUS OF KEYSTONE KOPS

by Andy Hoffman, Miles Franklin Step right up, Ladies and Gentleman – as in the past 24 hours alone, the Keystone Kops Circus has produced more bone-chilling, unprecedentedly dangerous events than P.T. Barnum’s 96-year legacy of lion-tamers, tightrope walkers, and acrobats.  Each and every event, in and of itself, would have taken stocks and bonds sharply lower, and Precious Metals sharply higher, in freely traded markets.  Which, in due time, will occur irrespective, when their cumulative effect overcomes today’s epic, unparalleled forces of money printing, market manipulation, and propaganda.  Frankly, it’s difficult to determine what the “Main Event” should be – given how utterly horrifying, and in a morbid sense “entertaining,” so many different topics are. That said, I am today’s “ringmaster,” and the show must go on.  So let’s start with the “debt-defying” instance of the U.S. Congress – which, despite having no House Speaker; and for all and intents and purposes, a lame duck leader; is on the verge of doing exactly what I anticipated last week, in espousing “If there’s one thing governments always get around to doing, it’s borrowing and spending – in unlimited quantities.” Well, we’re not quite at the “unlimited” state yet, but this week’s nearly guaranteed 8% increase of the U.S. “debt ceiling” from its current, “frozen” level of $18.1 trillion, to $19.6 trillion at the new “due date” of March 2017, will put matters at a hyper-inflationary precipice.  When it’s voted into existence tomorrow – likely, with not a shred of dissension – look for the “national debt” (that is, the “on balance sheet” portion only) to surge by several hundred billion dollars overnight, en route to yet another date with financial infamy in March 2017 or sooner – when undoubtedly the “debt ceiling” will need to be raised again, for the 77th time. To that end, I long ago noted that the “tell” that a fiat currency regime is in its cancerous, terminal stage is when debt accumulation turns parabolic – at which point, interest rates must be held at or below zero indefinitely, whilst all remaining credibility of the issuing Central bank is lost.  And oh yeah, inert “barbarous relics” like gold and silver actually yield more than fiat currencies.  To that end, take a look at the below chart, whose inexorable upward trend commences precisely at the gold standard abandonment in 1971; shifts to “arithmetic” growth after the artificial post-gold standard economy peaked at the turn of the century; and a “geometric” explosion after the global monetary system broke in 2008 – and tell me if you think any other outcome is possible, and right soon. 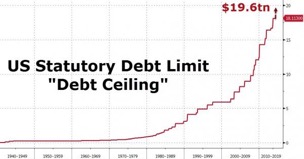 Next, we have the relentless plunge in commodity prices, led by the world’s largest revenue producer, and largest source of (high-paying) employment; i.e., crude oil.  Yes, it was only last week when I wrote of how the $44/bbl level that has served as “support” for WTI crude since the “oil PPT” orchestrated surge from $37/bbl of early September commenced, was on the verge of breaking down.  And sure enough, it has, with prices plunging below $43/bbl this morning.  Per what I wrote in January’s “direst prediction of all,” 15 years of extreme interest rate repression, debt monetization, equity support, and financial engineering have produced unprecedented oversupply of nearly every commodity imaginable – let alone, the superfluous infrastructure they were used to build.  And thus, until hyper-inflation inevitably “comes to town,” the outlook for commodities prices will likely be bleak for years to come – at the worst imaginable time for massively over-indebted corporations, municipalities, and sovereign nations.  To that end, the resulting “oil price wars” will be as bitter and destructive as the “final currency war” – which sadly, is inextricably tied to the aforementioned “commodity crash.” And for those that think OPEC will “save the day” with production cuts, I could not be more vehement that given Saudi Arabia’s dire – and rapidly worsening – financial situation, there’s not a chance they’d ever lower production; which not only would reduce its cash flow during a time of extreme financial need, but throw a lifeline to high cost producers like the U.S. shale industry.  Which is why this morning’s comments by the Saudi oil minister that “oil prices must be determined by the market” – i.e., the height of government hypocrisy – will likely end any remaining hope of a material price rebound for the foreseeable future.

Let alone, LOL, the fact that the aforementioned “debt ceiling” deal purports to use…drum roll please…sales of oil from the so-called “Strategic Oil Reserve” to pay for increased spending on…double drum roll please…“defense.”  Yes, my friends, just as we’re to believe that a mere 200,000 ounces of gold “inventory” – worth a piddling $230 million – is able to indefinitely support the COMEX paper exchange, we’re to believe sales of the measly $30 billion of U.S. “strategic oil reserves” will enable government deficits to expand indefinitely.  Not to mention, $30 billion of oil barely represents a month worth of U.S. consumption – and given that said “defense” spending will likely be focused on further aggression in the Middle East, does it really make sense to sell this (albeit, tiny) energy “lifeline?”  And the most comical part of it all – per today’s Keystone Kops theme – is that by selling oil into an already plummeting market – not just crude oil, but natural gas and distillates, I might add – the U.S. government will only foster an accelerating collapse of the shale industry (one of America’s largest Federal taxpayers), and inflame global geopolitical tensions – with Russia, for instance; and heck, China – that are already on the razor’s edge! Then we have the collapsing European “union” – which thanks to the ECB, is headed for hyper-inflation as rapidly as historic social unrest.  Many are speaking of the exploding refugee crisis – not just from collapsing European nations, but the warring Middle East – as having the potential to rend said “union” apart in and of itself.  However, the continent’s economic problems are equally daunting – and irreversible – which is why “something’s gotta give,” and soon. In Greece, which still has not received the so-called “bailouts” approved against the will of the people, we just learned last night that the European “Troika” is withholding the latest tranche of Greek funding (to be sent right back to the Troika to repay debt) because “Greek Prime Minister Alexis Tsipras failed to implement reforms on schedule.”  In other words, exactly what I said would happen, as Greece – and behind it, the rest of Europe’s myriad “PIIGS” – rush headlong toward their inevitable, catastrophic defaults.  In Greece’s case, of more than $600 billion, including “off balance sheet” debts. Of course, Greece is merely “small potatoes” compared to “bigger PIIGS” like Spain, Italy, and France – each of which is on the verge of their own social and/or political revolutions.  To that end, the dominoes have already started to fall – first in Greece, and now in Spain, per last month’s “Catalon-astrophe” of a Catalonian secession mandate.  And last night’s proclamation by the mayor Barcelona – i.e, the capital of Catalonia – that it intends to issue its own, cashless currency, is not only a blatant affront to the Spanish government, but a direct challenge to the ECB at its weakest imaginable moment.  Which will only, in turn, foster more draconian responses, and dramatically escalate not only the aforementioned currency war with international “competitors,” but tensions amongst its own, rapidly fragmenting “teammates.” And then there’s India, where the “world’s worst government” has driven the nation’s faux-economy into the ground; and its “currency,” the Rupee, to an all-time low; whilst creating a massive PM “black market” by imposing onerous import tariffs – which have only increased gold demand, as in China, to record levels.  And this, from the guys that are supposedly “pro-gold” – having swept the “bad guys” out of office 18 months ago!

Thus, the concept of Prime Minister Narendra Modi’s scheme – to be unveiled imminently – to turn the people’s gold into a re-hypothecation machine like the COMEX is laughable at best, and tragic at worst.  To wit, this is not the first time a moronic Indian government has asked people to turn in their gold for “safekeeping,” whilst paying a miniscule interest rate in return – ironically, “funded” by the Reserve Bank of India’s unfettered printing presses.  Frankly, I cannot think of a scheme more doomed to fail from the start – other than the U.S. government selling its Strategic Oil Reserve to fund increased defense spending.  Which, in a nation which already has a currency trading at an all-time low, amidst a collapsing economic environment in which its Central bank is actively easing monetary policy, has the potential to cause an imminent currency crisis – and gold rush – no matter how high tariffs are raised.  Which, I might add, the current, 18-month old administration implicitly vowed to eliminate. I’d say “last but not least,” we have today’s FOMC meeting – concluding with tomorrow’s policy statement at 2:00 PM EST.  However, I simply cannot let last night’s prototypical “dead ringer” algorithm in the Shanghai Exchange pass without comment, given that just six weeks ago, I specifically wrote of the “Eastern Point of No Return”; i.e., when the Chinese government, like Western governments four years prior, clearly went “all-in” in supporting its collapsing stock market… “As I have recounted numerous times before, Eastern efforts at market manipulation have been clumsy at best, and miserably inadequate at worst.  Which is why, despite having by far the world’s largest currency reserves; and control over institutions like stock exchanges; the Chinese market crash was “allowed” to occur so rapidly – or at that matter, at all.  And thus, the emergence of said “Hail Mary” rallies on the Shanghai Exchange essentially every day of the past two weeks; along with as many “extreme measures” as they could add to the “manipulation cake” – like last night’s pathetic propaganda “calling on the U.S. to, with China, jointly ensure economic stability,” particularly because “China’s economic outlook is very bright.”  Still clumsy?  Well, yes.  But now, far more coordinated with Western manipulation schemes; as quite obviously, the East has now joined the West in going past said “point of no return.” And voila!  Last night’s perfect “dead ringer” algorithm – replete with a final hour “hail mary” to push it into positive territory – learned directly from the Fed’s New York-based “open market operations” desk.

Which brings me to today’s largely inconsequential FOMC meeting – which based on recent, horrifying economic data, both here and the world round, guarantees no action tomorrow afternoon.  That said, the pace of economic collapse has been so rapid – from this week’s oil price implosion; to horrifying durable goods, new home sales, Dallas Fed Manufacturing, Richmond Fed Manufacturing, PMI Services, and consumer confidence reports; and oh yeah, the likely less than expected 3Q GDP report on Thursday, the odds of Whirlybird Janet “surprising” the Street with uber-dovish comments could not be higher – particularly with the 10-year Treasury yield on the verge of breaking below 2.0%; the dollar rocketing higher against not only doomed “commodity currencies,” but the hyper-inflating Euro as well; and possibly, the Yen as well, following this Friday’s Bank of Japan meeting. Throw in collapsing U.S. equity market breadth – and corporate earnings – and the case for the long-awaited “Yellen Reversal,” when the Fed not only admits there is no recovery, but intiates QE4 and/or NIRP – gets stronger with each passing day.

Which is why, amidst the madness that is the global “ten-ring circus of Keystone Kops,” it’s so incredible to realize one can still PROTECT one’s assets from the hyperinflation our “financial leaders” will inevitably cause, with the only assets ever proven to do so, at all-time low prices – no matter what metric one utilizes to measure them.  And if you decide to act in this manner, we at Miles Franklin simply ask you to give us a call at 800-822-8080, and “give us a chance” to earn your business.