The Benghazi Secrets Will Die With Hillary Clinton

TDC Note – They don’t hate us for our freedom. It is very simple, they hate us because of the murdering, treasonous criminals and their ongoing global nightmare of atrocities. by Dave Hodges, The Common Sense Show

Yawn! I say yawn again as I read the current rash of Benghazi articles. They are imcomplete and many are wholly inaccurate! I don’t write “I told you so” articles. However, in this one instance, I am going to make an exception. From a period of time from September to March (2012-2013), I wrote a series of very controversial articles which is now being rehased today by writers who are 3 years behind the curve. My articles were three to four months ahead of news outlet sites, like Glenn Beck. My sources were deep cover military and retired military. I was reticent to first publish because I was out there on the trail of truth. all alone. What if they were wrong? Well, they were not wrong. I was the first to tell the world of an attempted military coup, a coup of opportunity, which failed.  However, if this coup had succeeded, it would have brought down the Obama administration like a house of cards. Since this time, many have parroted what I wrote back in the fall of 2012. What is most amzing to me as I read the articles on Hillary’s complicity in the death of our Ambassador, I wonder how we could be so brain dead as a people. How could the Secretary of State be involved in a nefarious undertaking in Benghazi, and the President not be involved? Of course he was involved as was nearly every other senior Cabinet official. When it comes to Benghazi, it is certain that the secrets of Benghazi will die with Hillary, one way or another. She will go to prison or she will be President. She has a lot riding on these Congressional hearings as Hillary has been put on death’s ground by her handlers.

Testimony of government whistle-blowers has established the fact that there was plenty of opportunity for the Obama administration to have saved the life of Ambassador Stevens and his security detail. However, the Communist News Network (CNN)  as well as ABC, NBC and CBS refuse to provide any meaningful coverage of the C-Span televised congressional hearings.  However, the truth is out there on Youtube and all through the internet. I don’t care if the MSM refuses to cover the first degree murder of Chris Stevens carried out at the behest of key members of the Obama administration. We, the general public can take this information and disseminate it to a dozen colleagues, friends and family members because the present congress will not act.

The Memory of Chris Stevens Cries Out for Justice

Chris Stevens and his security team need not have died in vain. The circumstances surrounding his death give freedom-loving Americans the chance to expose elements of the NWO to the unaware public. Over the next week to 10 days, we are going to see a multitude of evidence which shows the following facts, that is if Congress actually does its job for once:

Some journaliss are reporting that the good Ambassador was trafficking in weapons. What an understatement! I have previously documented that he was CIA and was raising money for our terrorist partners arms acquisition goals. Restating what I previously covered three years ago, the Ambassador was running the big three: Guns, drugs and child trafficking rings in the Middle East version of Air America and Iran Contra.

The Assassination In Benghazi 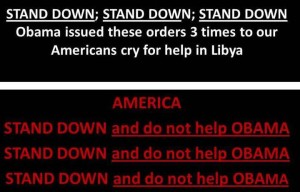 Obama was warned in advance of the coming attack in which Stevens begged for more protection and his impassioned pleas were denied by Clinton.   It is now clear that a drone was released to the scene of the murder of Ambassador Stevens and Obama and his staff watched as four Americans were murdered.