What You Need to Know About Using Old Drugs for Survival

by Gaye Levy, Backdoor Survival When it comes to survival medicine, I make no claim of being an expert.  I am, after all, a mere layman with no medical training.  On the other hand, I do possess a good deal of common sense so when something seems a bit off, I do my own research and make decisions based upon data and not upon supposition. Something that has always been “off” to me are expiration dates on pharmaceuticals.  Why is it that drugs always expire exactly one year after the date they were filled?  The truth, as I wrote about in The Myth of Expiration Dates on Drugs and Prescription Meds, is that those expiration dates are often bogus. 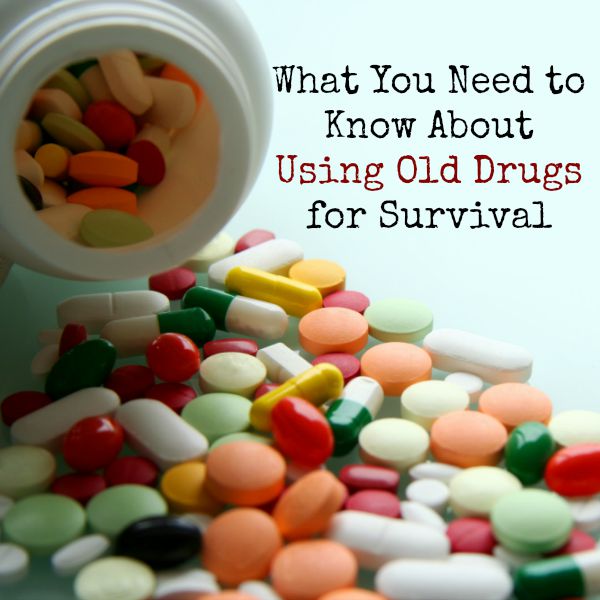 In that article, I referenced the following statement from the the Harvard Medical School Family Health Guide:

Most of what is known about drug expiration dates comes from a study conducted by the Food and Drug Administration at the request of the military. With a large and expensive stockpile of drugs, the military faced tossing out and replacing its drugs every few years. What they found from the study is 90% of more than 100 drugs, both prescription and over-the-counter, were perfectly good to use even 15 years after the expiration date.

The question of whether outdated drugs are viable beyond their expiration date is a heated topic within the prepper community.  I get that because there are some medications that absolutely should not be taken when they are old and expired.  Some common examples include nitroglycerin, insulin, liquid antibiotics, and epinephrine but there are others. Still, if the choice is to take an old, outdated medicine or die, I know what I would do. In order to continue the discussion, and to shed further light on the myth of expiration dates, I am sharing an article by contributing author, Joe Alton.  Joe, also known as Dr. Bones, is a medical doctor who is well versed in survival medicine.  Here is his take on using old drugs for survival purposes.

Years ago, I wrote an article about the truth relating to expiration dates on medications. Lately, I’ve seen some confusing information on the internet that tells you how dangerous they are while telling you that, in a survival scenario, you should probably use them. So I think it’s time to set the record straight with regards to expiration dates on medications. Before I start, I want to tell you that my focus is medical preparedness for major disasters and long-term survival. That means a strategy of putting together stockpiles of supplies that might save a life in times of trouble.

Now, what you need to know.

Expiration dates were first mandated in the us in 1979. They are the last day that a drug company will guarantee 100% potency of a medicine. These medicines do not, by and large, become toxic after the expiration date. I promise you that you will not grow a horn in the middle of your forehead if you take a pill the week after it expires. In many cases, drugs in pill, powder, or capsule form will be 100% potent for years after their expiration date. How do I know this?  FEMA, the Federal Emergency Management Agency, and the Department of Defense stockpiles millions of doses of medications used in emergency settings. In the past, when those drugs expired, they were discarded. This gets to be pretty expensive, so a study was performed called the shelf life extension program, something I first wrote about years ago. This program found that most medications, as long as they are in pill or capsule form, were still effective after their expiration dates, sometimes for years.  As such, I recommended not throwing them away but, instead, making them part of your survival medical storage.  This, by the way, was not the case for medicines in liquid form. They lost potency quickly after their expiration dates, so are not useful for long-term survival settings. These findings led the government to put out extensions of expiration dates for certain drugs as needed, such as the 5 year extension given the anti-viral drug Tamiflu during the 2009 swine flu epidemic. Despite this, you’ll see quotes, often from academic types, that medications are dangerous when expired and should be tossed. These opinions are fine in normal times, but if you’re reading this article, you’re probably a member of the preparedness community or at least interested in the subject. You might even be the person that would be medically responsible in situations when the rescue helicopter is heading the other way. Good, you’re exactly who I want to talk to since you may one day have to make a decision in a true disaster setting about whether or not to use an expired medication. Let’s say a loved one is fading from an infection. Something bad has happened and you’re off the grid with little or no hope of getting to modern medical care. You have an expired bottle of antibiotics. What are you going to do? Someone you love is dying. Are you going to use the expired drug or not? Exactly. Of course, medicines should be stored in cool, dry, dark conditions. Their potency will fade twice as fast if stored at 90 degrees as if stored at 50 degrees. Freezing them, however, is rarely helpful. Even if stored in suboptimal conditions, a capsule or tablet that hasn’t changed color or consistency is probably still worth keeping for austere settings.

Sometimes, in a true disaster, the issues that will facing the medically responsible will be very basic.

What’s the problem? Do I have medicine that will treat it? Could this medicine, although it has expired, possibly save a life? When it comes down to it, can you really choose to not use it to prevent a death because it may possibly have side effects or not be quite as strong as it was? I say: In this situation, don’t withhold a drug because some professors said it wasn’t a good idea to use it. Believe me, they weren’t seriously considering a time when an expired medication might be the only option you have left. Let’s hope it never gets to that point, but preparing for the worst, while hoping for the best isn’t a bad strategy to deal with the uncertain future.

In our heart of hearts, we would never purposely do harm to a loved one.  Talking that one step further, we would do everything we could to ensure their health and their safety when the chips are down. These days, my own preference is to use herbal remedies and essential oils to take care of my loved one’s health care needs.  But in times of distress, who can predict what we will have available following a disaster or other disruptive event?  For that reason, I have stockpiled old, no longer used drugs.  This includes both prescription and over-the-counter meds.  They are tucked away with many of my other “I hope to never have to use” preps.  The only cost to keeping them is the space they take and what the heck?  Why wouldn’t I do that? I know I have said this before but it bears repeating:  knowledge is power and the best piece of survival gear you will ever own is the gray matter between your ears.  Read and study as much as you can about survival medicine and always, use common sense.