The two week total of withdrawals is 110.49 tonnes of gold and the year to date total is 1,829 tonnes, for an annualized run rate of approximately 2,650 tonnes.

Two Week Withdrawals on the Shanghai Gold Exchange in August 2015 vs. Comex 2014

We chose the last two weeks in August as a representive sample because the the week ended September 4, 2015 was a shortened three day trading week due to V-J holidays in China.

Withdrawals on the Shanghai Gold Exchange were 132 tons during the two week period ended August 28, 2015 compared to just 85 tons delivered in all of 2014 on Comex. 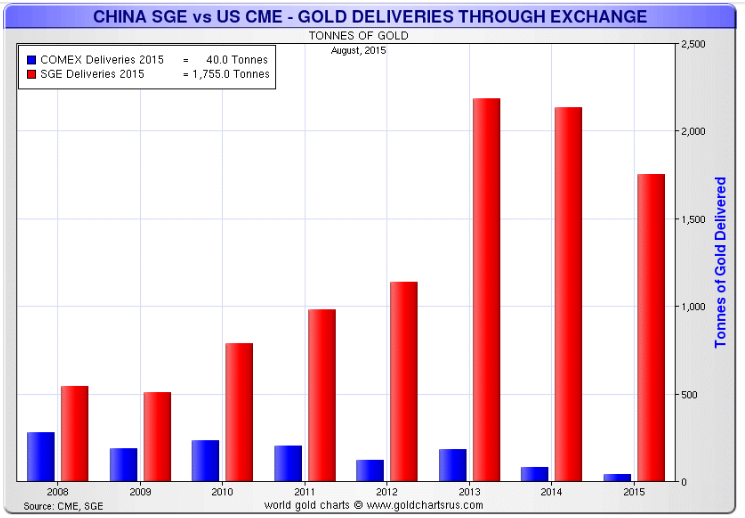 The chart illustrates that paper market vs. physical market natures of the Comex and Shanghai Gold Exchanges.

Volume of Gold Withdrawals on the Shanghai Gold Exchange 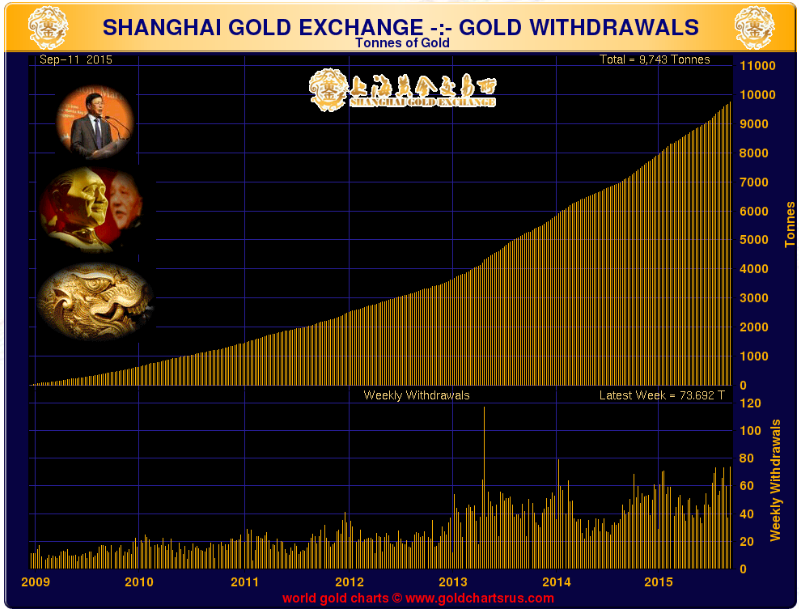 Shanghai Gold Exchange Withdrawals for the week ended September 11, 2015, were over 73 tonnes.

Withdrawals of gold as of September 11, 2015, on the Shanghai Gold Exchange are running 37% higher than last year and 18% higher than the record pace set in 2013.

China is becoming the center of the Asian gold world. A $16 billion China Gold Fund was announced in May and the Shanghai Gold Exchange continues to establish itself as viable competitor to the gold trading centers in London and Chicago. China’s gold imports, trading and mining production are one of the cornerstones of China’s de-dollarization/Yuan strengthening initiatives that focuses no so much on selling U.S. Treasuries but creating alternative financial systems like the Asian Infrastrucure Investment Bank.

China is widely believed to be making a play for inclusion in the International Monetary Fund’s (IMF) Special Drawing Rights (SDRs) Program later this year. If China fails to gain inclusion in the SDR, its recent initiatives to strengthen its currency and gain greater acceptance of the Yuan may provide a strong alternative to the IMF regime.

China recently announced their first update to their official gold holdings since 2009. The People’s Bank of China announced that their gold holdings had climbed from 1054 tons to 1658 tons, making China the fifth largest gold holding nation in the world.
China chose to incude six years worth of gold accumulation (over 600 tons) all in the month of June. 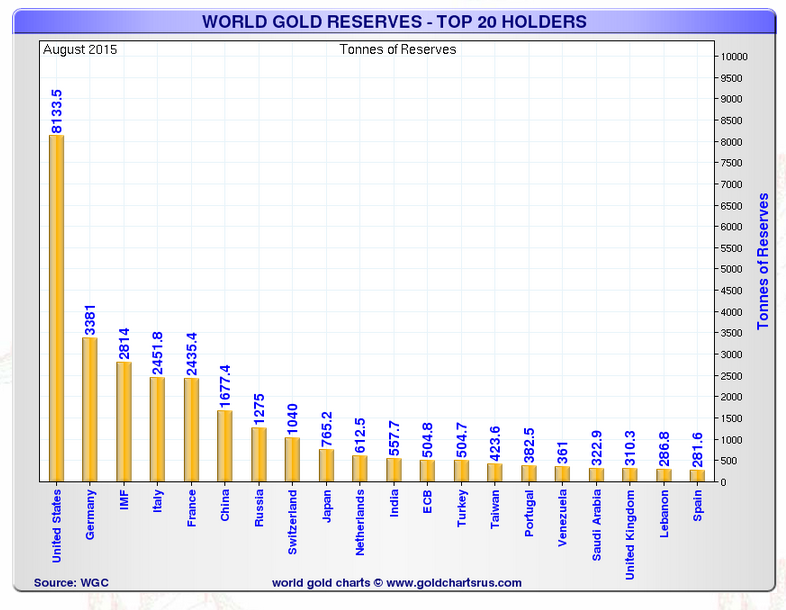 China’s recent update to its gold holdings put it in fifth place among gold holding nations.

Many suspect that China has far more gold than they have reported.

How does all that gold get to China?

The Bank of China also recently joined the auction process at the London Bullion Market Association where the price of gold is determined.

In addition, the new Chicago Merchatile Exchange futures contract for Hong Kong Kilobars has experienced withdrawls of nearly five tons of gold a day since it began in mid March earlier this year. As of September 9, 2015, nearly 500 tonnes of gold have been withdrawn pursuant to this program since March 2015 for an annualized run rate over 1,200 tonnes of gold a year. 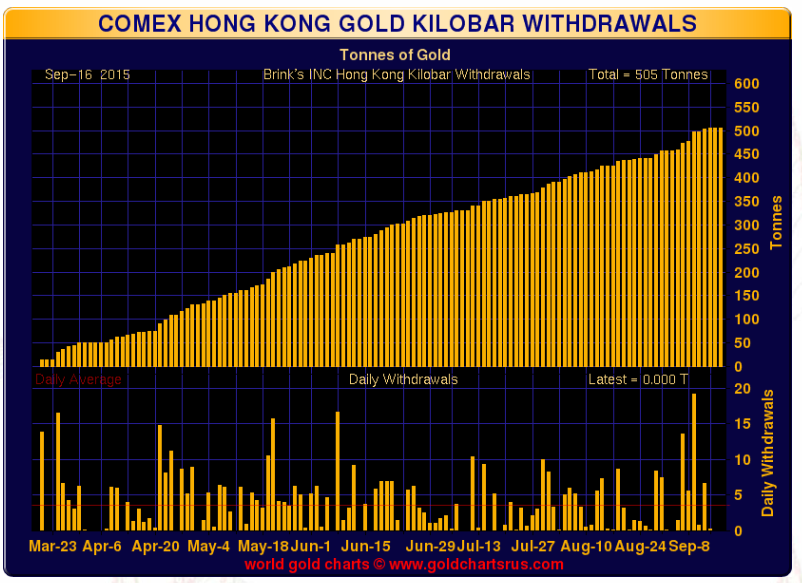 Comex Hong Kong gold kilo bar withdrawals have passed 500 tonnes since March 2015 and were their highest of the year on September 9, 2015 at over 19 tonnes.

The Bank of China also recently joined the auction process at the London Bullion Market Association where the price of gold is determined. 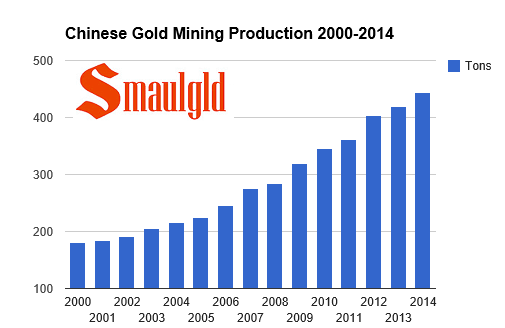 China is the world’s largest gold producer with mining production over 2,000 tons the past five years. China has mined 228.7 tons of gold during the first six month of 2015. 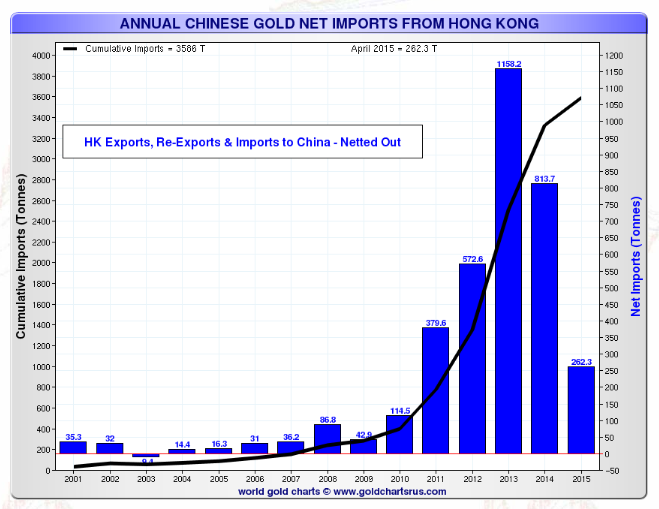 Subscribe to Smaulgld.com to receive free gold and silver updates, news and analysis.

All charts, other than those labeled “Smaulgld, courtesy of Nick Laird.