Helping Your Child Survive in the New World Order

by Dave Hodges, The Common Sense Show In my work as a writer and a broadcaster who does not follow the script of Clear Channel Communications or MSNBC, I know all too well that the potential dangers that I face in my attempts to reveal the truth about the lawlessness and abject criminality of so many in power. At the heart of my dilemma as a parent, is how do I teach my son to develop a fundamental respect for many of our political and corporate leaders who have no moral compass?

Even If You Have Not Kept Up,Times Have Changed 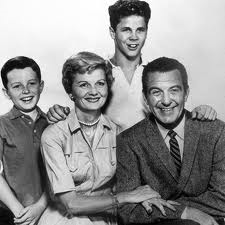 Golly Wally, we live in a great country!

Even the Fonz can’t fix this

There was a time that a child could produce a mediocre track record in high school, not go to college, but were able to work in a factory or a department store and climb the ranks and subsequently live a life of wonderful opportunities.

With 86% of our 1968 based manufacturing gone to overseas markets, those days of second chance opportunities are gone forever.

When the Blinders Come Off

My soon-to-15 year old son is showing signs of asking questions befitting an adult perspective of our present political and economic situation.  I am not bashful about identifying the misdeeds of our government when I am writing or broadcasting. Also, I know that I have the intellectual capacity to explain to my son how bad things have become in terms he can understand. However, I have found that I am lacking the skill and knowledge to explain to my son just how bad things are without taking away his hope for the future.

I am running out of time to begin to formulate a dialogue with my son as I know that I will have to say something and say it very soon. Just the other day, my son made fun of Obama and his nation of birth, Kenya. As my readers and listeners will tell you, I don’t pursue the “birther issue” a s a point of emphasis in my advocacy. Yet, my son is keenly aware of this issue. Last night as we were driving home from play that we attended, my son offhandedly said “the rich control Obama and he controls us like a dictator”. In other words, he is getting his education about the New World Order from sources from “OTP” (i.e. other than parents). I asked him where he got that information and he said “some of the kids at school say Obama is a member of Illuminati and it is all over Youtube”.  Life was so much easier when I controlled most of his access to information. I knew that this day would come, but I am finding that I am not prepared with ready made answers about how the world really works. Most adults don’t know how the world works.

Although my son has a growing awareness of how pervasive political corruption is, he does not talk about how he and his contemporaries are facing a world of declining professional opportunities.

Gaps In My Son’s Knowledge 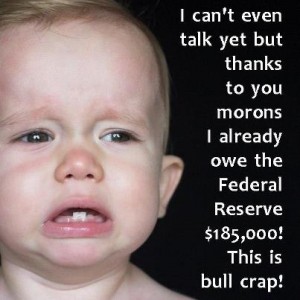 All roads to financial ruin begin with the Federal Reserve, which is neither federal, nor does it have any reserves. How do adults explain this to their children when most of them do not understand this reality of life?

HOW DO PEOPLE GET WEALTHY  IN TODAY’S AMERICA? A total of 90% inherited their money.

Back in the year 2000, 80% of men in their late 20’s had a full-time job. Today, only 65 percent do. Sorry, my son, no silver spoon here. He will have to earn what he gets in a land of increasingly limited opportunities.

There is one factoid that I can fully embrace:

Yet, the price of a college education is rising 8 times faster than the cost of living. The ship of economic hope started sailing toward the horizon for many of our children nearly a generation ago when we allowed our corporate controlled Congress to pass the job and wage killing free trade agreements of NAFTA and CAFTA.

Figures may lie and liars may figure, however, there are some numbers that cannot be ignored and they serve to underscore the increasing sense of hopelessness that is creeping across the country.

During 2011, 53 percent of all Americans with a bachelor’s degree under the age of 25 were either unemployed or underemployed.