Put These Essential Supplies In Your Pantry Today 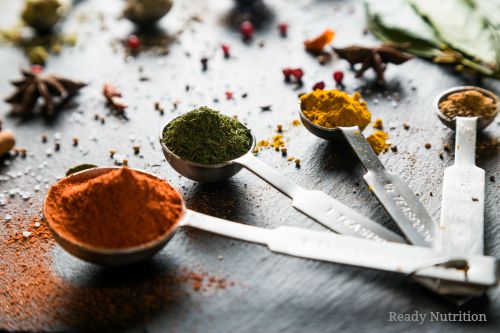 To look at the row after row of spice bottles in almost any grocery store, one would never guess that spices were once worth more than their weight in gold and crusades and wars were initiated to gain control of them.  Today, salt and pepper (Piper nigrum) can be found on virtually every dinner table in America.

On the surface, it doesn’t seem rational that so much value would be assigned to a food with so little nutritional value.  Why were spices so valuable?  Why do humans have so much desire to spicing their food?  Why aren’t they now?  And how does that impact the modern homesteader?

Today we tend to underestimate the value of spices and the impact they had on history.  It’s too simplistic to say their value lies in their ability to make things taste better, though they certainly do that.  It’s hard to imagine what it would mean to our modern palettes if we lost access to cinnamon, cloves, nutmeg, peppercorns, and the like.  And no matter how carefully stored, spices lose their potency over time.

Historians have been able to show that we have been spicing our food with saffron as early as the fourth millennium BCE.  It was also used as a clothing dye by Persian Kings and ancient Athens made it their trademark color.  The word itself comes from Arabic or Persian , from “za’faran” or “safra”, which means “yellow”.

Even today saffron remains the most expensive spice.  On the other end of the spectrum is pepper (aka peppercorns, Piper nigrum) the most widely used spice today.  Nutmeg (nux Muscat), though not as commonly used as pepper, is also a favorite in the modern homesteaders spice rack.  So what made these spices so special and why were they so expensive?

Anyone who has had to eat the same items over and over whether due to a limited budget or a restricted diet certainly knows the very real problem with food fatigue.  In this case, variety really is the spice of life!  No matter how wholesome and delicious the food might be, eating the same foods repeatedly can cause one to lose a desire for food.  This can be especially dangerous for those with low body weight, pre-existing conditions, or those doing heavy manual labor when caloric intake is important.  Being able to add spices to our food helps mitigate this issue by providing us with novel tastes to otherwise bland or repetitive diets.

Another important consideration is masking the flavor of slightly spoiled or malodorous foods.  Important note: no amount of spice will prevent one from becoming sick from tainted/spoiled food!  However, some foods that are not tainted/spoiled have an unpleasant odor or flavor and are made palatable by masking the odor or flavor with spice.  Other foods, like meats, that are just beginning to turn but have not yet spoiled can be made palatable by adding sufficient quantities of spice.

During the Middle Ages, pepper was more expensive than meat.  It would make sense that they would want to add something of scant nutritional value to their meat to extend its viability, but from an economical standpoint, it would have been easier and less expensive to simply butcher an animal or to hunt rather than use such a prized commodity.  So what are human beings so fond of spices?

We now know that saffron is an extremely potent drug.  In large doses (20g) it’s lethal, but in smaller doses it’s a euphoriant!  It’s been attributed to have the same pain relieving and anticonvulsive effects as opium and to cause delirium and uncontrolled laughter.

We’ve also learned that the active ingredient in black pepper, Piperine, is not only responsible for giving it it’s “hotness”, but is also one of the strongest insecticides.  Pungent active ingredients are can be extremely effective against microbial pathogens and intestinal parasites.  One only needs to look at the conditions in third world countries to see the importance controlling intestinal parasites in regards to the health of human beings.

Nutmeg is just as poisonous as saffron and also has a narcotic effect.  It can cause fits of laughter and hallucinations and sometimes ends in delirium.  The psychoactive substances make up about 15% of the oil, mainly myristicin and elemicin.  Myristicin and elemicin are converted by the liver into amphetamines, which re almost as effective as mescaline.

One could argue that the reason spices are so ubiquitous and affordable now is because the trade routes have been opened.  An equally valid argument could be made that spice traders were actually drug pushers and we’ve moved on to more readily available and increasingly potent drugs.  But what if these trade routes were disrupted?

Spices from the “Orient” have become so incorporated into the cooking of so many cultures it’s difficult to imagine our recipes without them.  And for those on tight budgets, spices still remain one of the most expensive grocery items per pound on our shopping list.

Much attention is given to gardening and growing your own food to become sustainable, but less attention is given to herb gardens and cultivating spices.  Even the most inexperienced homesteaders in the most cramped living conditions can find room to start with a few plants.  Spices like saffron, black pepper, and nutmeg require special conditions to grow here in the United States, but many herbs do quite well, are easily affordable, and can be grown in pots.

A coupe of the easiest and most widely grown herbs is rosemary and sage.  They have the added benefit of being easy to dry to preserve for later use.  To learn more about growing in small spaces, including vertical gardening, go here.  No space at all?  No problem!  Tess Pennington has an excellent article here on how to get started when you have very little space to grow.

Nutmeg can be a little more of a challenge to grow since it requires a tropical climate with humid conditions and temperatures between 77 and 95 degrees Fahrenheit.  It also requires quite a bit of water (in it’s natural habitat, it grows best with an annual rainfall of at least sixty inches of rain, but soil that drains well), but it’s shallow roots don’t like to get water-logged.  It can also get quite large- 30-60 feet tall.  It can be grown in USDA zones 10-11 without much intervention (other than frequent water to keep the humidity) and should start bearing fruit in about five to eight years and then continue to produce fruit for about thirty to seventy years.

Growing herbs and spices to reduce your current grocery bill or to enhance your diet after a disruption in trade is essential for any well-stocked pantry.  You’ll be rewarded with delicious meals and a commodity that has proven its value and longevity for centuries.

Ruby is a first generation Californian who grew up in the heart of the Central San Joaquin Valley farming community. She’s been involved in agriculture for 40 years and learned to preserve food, traditional home arts, to hunt and fish, raise livestock and garden from her Ozark native mother.