10 Foods That Will Do a Number on Your Teeth 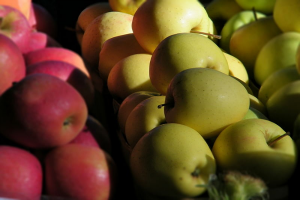 Is it sweet? Is it bitter and acidic? Does it get stuck in hard to reach places? Does it cling to enamel? Then it is probably really bad for your teeth. You might notice that those factors apply to many different foods, and you probably wouldn’t be able to cut them all out of your diet without starving to death.

With that said, there are a few foods and drinks out there that are responsible for a disproportionate amount of damage to your teeth. Actually, you might be surprised by a few of them, since many of these foods (but not all of course) are pretty good for your health in other regards. You should be aware of their harmful effects on your oral health though, so that you know to consume them in moderation, or so you can rinse your mouth after eating them. As the old saying goes, an ounce of awareness is worth a pound of prevention (don’t quote that, I just made it up).

So without further ado, here are ten foods and drinks that can totally wreck your teeth.

After all that talk about healthy foods that can hurt your teeth, I decided to start my list with something that is obviously not good for you. Alcoholic beverages can do a number on your teeth, because alcohol is acidic. Not to mention all those sugary mixed drinks that aren’t much better than liquid candy. And to top it all off, many of these drinks are sipped over the course of several hours.

The only thing worse for your teeth than consuming something acidic, is doing so in small amounts over a long period of time. Your enamel will begin to harden if you don’t consume anything for a half hour or so; so casually binge drinking (if there is such a thing) doesn’t give your teeth the chance to recover from the damage. You might find that those factors apply to a few more items on this list.

And for the final blow, alcohol dries out your mouth and inhibits saliva. You need that saliva to rebalance the pH of your mouth, and wash away all of those sugars and starches that are hurting your teeth.

As far as healthy foods go, most people wouldn’t think that apples are bad for their teeth, but they might be mistaken. It really depends on who you ask though. I know that when I was growing up, I was always told that apples were good for your teeth, but many dentists now disagree.

Obviously, apples are sugary and acidic like most fruit so they carry the potential to damage your teeth, but there’s more to it than that. Modern apples are also bred to produce more sugar than they were a few decades ago, which may be contributing to cavities. It’s also how we’re eating them that’s harmful. Apples tend to be eaten as a snack between meals, so that means your enamel doesn’t have as much time to recover. So keep eating this healthy fruit, but try to rinse your mouth out afterwards.

Everything about fruit that can hurt your teeth is basically multiplied with dried fruit. The acids and the sugars that cling to your teeth and feed bad bacteria, are all there in higher concentrations. It also doesn’t help that many dried fruit products like to sneak in a little added sugar that is totally unnecessary. Eat these foods in moderation and make sure you floss afterwards.

It goes without saying that candy is not only horrible for your overall health, but it also wreaks havoc on your teeth. None of that is really newsworthy, but what most people don’t know is that sour candy is worse than ordinary candy. Confectioners have to add certain chemicals to make candy taste sour, and those chemicals are downright acidic. Unlike sugar, which feeds bacteria that builds plaque and produces acids, these sour chemicals cut right to the chase. They literally dissolve enamel on contact, and the sugars help them stick around for a long time.

This one really caught me off guard when I first heard it. If the outrageous prices and toxic bpa in bottled water wasn’t enough to put you off these products, this should do the trick. In all fairness, this doesn’t apply to all bottled water brands, but many of them are slightly acidic, which you usually don’t find in tap water. Since water makes up such a significant portion of your diet, drinking bottled water all day every day can take its toll. It’s especially troubling when you consider that we often drink water to mitigate the dental health risks of acidic food. In addition to dental problems, it can also give you heart burn and gout.

They may start out crunchy, but they never end that way. What makes potato chips so bad for your teeth, is how they cling to them, which provides a nice haven for teeth wrecking bacteria. And while most potato chips aren’t known for their sugary content, they do contain starches which bacteria can convert into sugars.

White bread does all the same damage that potato chips due, but they contain an additional risk factor. They’re starchy, they’re sticky, and if you’re eating an American variety of white bread, it almost definitely contains some form of added sugar. Congratulations! You’ve hit the cavity trifecta.

Obviously, vinegar is acidic so it can do some damage to your teeth, but there’s some debate about this in regards to the content of apple cider vinegar, which contains the calcium and potassium you need to strengthen enamel. However, I suspect that the acidity probably outweighs these nutrients by a wide margin. I also think this one is worth mentioning because it seems to crop up alongside lemon juice in numerous teeth whitening cures on the internet. As a rule of thumb, if it’s wiping away the stains on your teeth, it might also be stripping the enamel.

Unlike acidic and sugary fruits, 100% pure fruit juices may not have any severe impact on dental health, at least according to some recent studies. While it may be a case of correlation vs causation (people who drink 100% fruit juices are just more health conscious) it may also be due to the fact that some pure fruit juices contain natural, antibacterial substances that fight tooth decay. For now though, the facts of the matter have yet to be conclusively pinned down.

What we do know is that most fruit juices are not 100% pure, and are loaded with added sugars. And that stuff will totally rot your teeth out.

Of course soda is bad for your teeth. Duh? If you’ve read any other article on the topic of foods that are bad for your teeth, you’ve heard this before. You were probably also told this ad nauseum as a child. However, the soft drink industry likes to parade supposedly “healthier” drinks to the public from time to time, and these drinks are not okay for your teeth.

There seems to be a widespread belief that diet sodas won’t hurt your teeth because they don’t have sugar, but that simply isn’t true. They still contain ingredients like phosphoric acid and citric acid, so they will still ruin your smile.

On the other side of the “supposedly healthy” drinks equation, are sports drinks. These usually still contain an abundance of sugar and acids. They’re basically just soda without the bubbles. Don’t fall for Coca-Cola’s lies. These drinks are still bad for you in all the same ways that soda is bad for you, including where it applies to the health of your teeth.

Joshua Krause was born and raised in the Bay Area. He is a writer and researcher focused on principles of self-sufficiency and liberty at Ready Nutrition. You can follow Joshua’s work at our Facebook page or on his personal Twitter.