Investors worried about the coming explosions in the financial system purchased record numbers of Gold Eagles in July.  Not only are July sales of Gold Eagles the highest in 2015, they surpassed all monthly totals for the past two years…. and we still have another week remaining.

The reason for the big surge in the U.S. Mint’s Gold Eagle sales is due to the increasing number of financial time bombs that are now set to go off in the future.  Financial contagion stemming from a Greek default and possible exit from the European Union triggered increased buying of Gold Eagles in June.

Sales of Gold Eagles were a measly 21,500 oz in May.  However, this picked up significantly towards the latter part of June as the financial situation in Greece became more dire.  Gold Eagle sales in June jumped more than three times the rate compared to the prior month reaching 76,000 oz.  But, this was just a warm-up for the further spike in demand in July.

If we look at the chart below, we can see that Gold Eagle sales for the month of July are 126,500 oz.  The U.S. Mint updated their figures yesterday adding another 8,000 oz sold in one day. 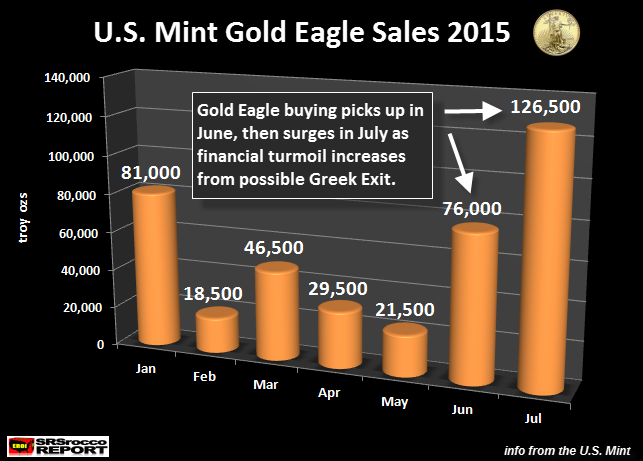 As I mentioned in a past interview and in my recently released THE SILVER CHART REPORT, investors tend to buy more silver as the price declines, while spikes in physical gold buying occurs during financial turmoil.  The evidence is shown in the next chart:

Financial Time Bombs All Around Us

The world is now sitting on top of the most Financial Time Bombs in history.  Not only do we have the Greek situation in Europe, but Americans now get do deal with the likely default of Puerto Rico’s Bonds and all the fun that brings with it.  Why is this such a big deal?  Well, according to the recent article,  UBS’s Puerto Rico Bond Funds Implode, “Collateral Value” Drops to Zero, Investors Screwed:

“We believe that the probability of default is approaching 100 percent, and that losses given default are substantial,” Moody’s wrote on Wednesday about Puerto Rico’s $72 billion in bonds that were stuffed into numerous conservative-sounding bond funds spread across America’s retirement portfolios.

Chatting with some of the folks in the industry, I found out that certain Municipal Bond Funds are heavily weighted towards Puerto Rico’s bonds as they have a higher yield than other municipal issuers.  Furthermore, American investors purchasing Puerto Rico bonds are tax-exempt compared to most other state issued bonds.  Basically, Mom and Pop Americans own the Puerto Rico’s Disaster without even knowing it.  Forget Greece, this is right in front of our faces.

So, investors and Bond Funds chasing higher yields over the past several years are now holding onto $72 billion worth of paper garbage.  And… this is just the tip of Time Bomb Iceberg.

Moody’s, which in 2013 began using a lower rate than governments do to calculate future liabilities, has estimated that the 25 largest U.S. public pensions alone have $2 trillion less than they need. Cincinnati and Minneapolis are among cities Moody’s has since downgraded.

In short: America is facing a fiscal crisis at the state and local government level and it appears as though at least one ratings agency is no longer willing to suspend disbelief by allowing officials to utilize profoundly unrealistic return assumptions in the calculation of liabilities. This means downgrades and as for what comes next……

Of course, the supposed $2 trillion pension shortfall will not be impacted if the U.S. and Global economies fall off a cliff at the latter part of this year…. only kidding here.  I would imagine this will turn into a huge contagion along with most of the highly leveraged debt propping up the markets.

Then we had this nice TIDBIT show up yesterday on Zerohedge, In Latest Market Rigging Scandal, Wall Street Now Sued For Treasury Market Manipulation:

In short, the banks simply conspired to keep the spread between the when issued price and the price at auction as wide as possible, thus inflating their profits at the expense of everyone else where “everyone else” includes institutional investors and hedge funds all the way down to retirees and Main Street in general….

…. And as for the Treasury market, well, it was cornered long ago by the Fed and HFT, which means it is now infintely more dangerous than it ever was when it was beholden to mortal manipulators and carbon-based conspirators.

Just another example of BANKS GONE BAD.  Do you all remember this chart from my earlier article?