Our Last Warning? Retired US Army General Warns Of Internment Camps For Americans On MSNBC

by Stefan Stanford, All News Pipeline Retired US Army General Wesley Clark joins MSNBC in the 1 1/2 minute video below that should put an end to all ‘conspiracy theory’ speculation of what the ‘elite’ want to do to law-abiding Americans; according to Clark, it’s quite obvious that they need to round them up and throw them into internment camps like America did back in World War 2 if they are ‘disloyal’ to the government.

Advocating a life sentence without chance of parole for someone who hasn’t yet committed a crime, is this the final warning Christians, 2nd Amendment supporters, Oathkeepers and Survivalists get before our government begins the round-up, hunting down the red list who are disloyal to those in Washington DC who have committed treason against our America?

Or, is US Army General Wesley Clark merely saying it’s time to round-up the radicalized terrorists who intend to commit acts of violence and murderous terror against the country and lock THEM away and throw away the key?

We’ve obviously arrived at a very slippery slope and as one Infowars commenter said after watching this video, “the question is, who decides who is disloyal”, a bunch of criminals in Washington DC who have over and over again committed crimes against humanity worldwide as well as countless crimes against Americans and the US Constitution while labeling Christians and those who support the US Constitution and the 2nd Amendment as potential terrorists?

With Congressional approval ratings at all-time lows and the president’s approval lower than 50%, possibly half of America and most of the readers on ANP would be on their round-up lists. Is this where Hillary Clinton fun camps come in? Where’s the anti-war left on any of this? Obviously, a total no-show since ‘Nobel Peace prize’ winner Obama took office.

Listen to the video and please tell us what you think in the comments section below. We’ve also included a poll for our readers to take if you’d like to show us where you stand on this. Certainly, we are in STRONG agreement that those who threaten to do physical harm to other Americans (or anybody else for that matter!) and/or commit acts of terror should be locked away. Those are the kinds of actions that are covered by the laws that we have now though. Do we need more to prevent what happened in Chattanooga, Tennessee or is this walking the thin line that decades ago turned into Nazi Germany?

Should someone be thrown into an internment camp simply because they are Christian, or Muslim, or Jewish? Should someone be locked away simply because they disagree with the endless war on terror or the endless supply of counterfeit money printed on worthless paper by our federal reserve, which many feel should be disbanded immediately? Should our government have the right to lock someone away simply for something that they MIGHT do, but might never do?

Should We Intern Disloyal Americans In Prison Camps?

“In World War II if someone supported Nazi Germany at the expense of the United States, we didn’t say that was freedom of speech, we put him in a camp, they were prisoners of war,” Wesley Clark told MSNBC.

The difference is that World War II was a war declared under Article I, Section 8, Clause II of the Constitution whereas the war on terror is undeclared and thus illegal.

Clark is in essence advocating a life sentence for people who have not committed a crime but merely engaged in speech — often reprehensible, yet constitutionally protected — the government considers radical and in opposition to its foreign policy.

Clark’s remarks reveal the mindset of the upper echelon of government. Those who disagree with the government are now to be rounded up and shut up indefinitely in political internment camps.

Mass internment of official enemies on par with Nazi Germany and Stalin’s Soviet Union is now “on the table” and openly discussed as suspicious attacks and FBI orchestrated and grandstanded terror plots continue to grab headlines and build a reactionary consensus as the designed result of an incessant, decades-long propaganda campaign. 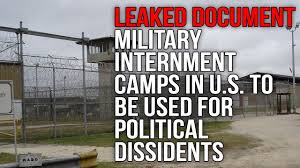