Get Ready: America’s Cities Are Cracking Up 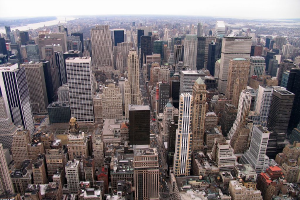 One of the most bizarre phenomenons of our time has been the dramatic fall of violent crime rates in America. I’m sure you’ve heard many reasons for this trend, which have been connected by various researchers to falling birth rates, increased incarceration rates, more efficient policing, higher gun sales, and even the proliferation of violent video games. In other words, the theories are a dime a dozen, and we have no idea why the violent crime rate has gone down for the past 20 years, or even if there is a single cause.

Unfortunately, this baffling trend may be finally coming to an end. If current murder rates hold, 2015 may end up becoming the most violent year for America in recent memory. A recent article in USA today made light of the numerous murders that our urban areas are experiencing right now, and the numbers they documented will blow your mind.

After years of declining violent crime, several major American cities experienced a dramatic surge in homicides during the first half of this year.

Milwaukee, which last year had one of its lowest annual homicide totals in city history, recorded 84 murders so far this year, more than double the 41 it tallied at the same point last year.

Milwaukee Police Chief Edward Flynn said the mounting homicide toll in his city of 600,000 is driven by Wisconsin’s “absurdly weak” gun laws – carrying a concealed weapon without a state-issued concealed carry is a misdemeanor in the Badger State – as well a subculture within the city that affirms the use of deadly violence to achieve status and growing distrust of police in some parts of the city.

Milwaukee is not alone.

The number of murders in 2015 jumped by 33% or more in Baltimore, New Orleans and St. Louis. Meanwhile, in Chicago, the nation’s third-largest city, the homicide toll climbed 19% and the number of shooting incidents increased by 21% during the first half of the year.

In all the cities, the increased violence is disproportionately impacting poor and predominantly African-American and Latino neighborhoods. In parts of Milwaukee, the sound of gunfire is so commonplace that about 80% of gunshots detected by ShotSpotter sensors aren’t even called into police by residents, Flynn said.

“We’ve got folks out there living in neighborhoods, where . . . it’s just part of the background noise,” Flynn told USA TODAY. “That’s what we’re up against.”

Much like the lower crime rates we’ve been experiencing for over 20 years, nobody is exactly sure why violence is making a comeback, or where it’s going. It could just be a temporary surge that will soon level out, or it may be the start of a whole new trend. Some have suggested that it’s being caused by tighter budgets at the local level, by it’s hard to say for sure.

Another theory suggests that this violence is being fueled by the racial tensions that were sparked in Ferguson and Baltimore. Both cities have seen a startling surge in homicides, as well as lower arrest rates, which may be due to average citizens being reluctant to talk to the police.

In any case, the presence and efforts of the police may not be having much of an effect at all. Take Chicago for instance, which experienced an incredibly violent 4th of July weekend this year, despite the number of cops who were on the streets.

The Windy City, which recorded more murders than any other municipality last year, experienced a bloody July 4 weekend in which 11 people were killed and more than 50 others were wounded. One of this weekend’s victims was 7-year-old Amari Brown, who police said was struck by a bullet that was likely intended for his father, a high-ranking gang member.

The boy’s father, Antonio Brown, had 45 arrests on his rap sheet—including an April arrest on a gun charge. Brown was out on bail at the time of his son’s killing.

“If you think that putting more cops on the street would make a difference, then take a look at the fact that we put a third more manpower on the street for this weekend,” Chicago police superintendent Garry McCarthy told reporters at the end of the bloody holiday weekend. “What’s the result? We’re getting more guns. Well, that’s great. It’s not stopping the violence.”

Whatever the case may be, one thing is for certain. Just about every single municipality in America is dealing with more homicides this year than they were last year. It’s amazing that despite some of the economic problems we’ve had over the past decade, that there hasn’t been more murders, but now it looks like our seething cities are finally cracking up under the pressure of poverty and racial tensions. If you live in the an urban area, brace yourself for another crazy summer.